Here’s a special post by my friend Ana Eire…

When I first saw Aurora’s announcement for her Hollywood’s Hispanic Heritage Blogathon, I immediately thought of The Ring, a little-known, low-budget B-movie produced by the King Bros. in 1952. The Ring is a boxing movie that subverts most conventions of the genre. It is also a commentary on the Mexican-American experience like I have never seen depicted in a movie, not even today. The fact that Rita Moreno plays a major role doesn’t hurt the film either. 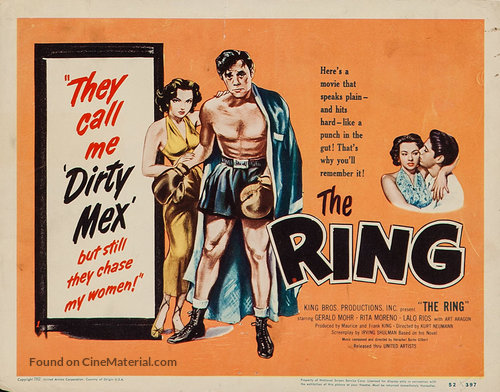 The Ring feels ahead of its time. It tells the story of Tommy, a young Mexican-American fighting to earn respect for himself and his community. He faces discrimination, stereotyping, and segregation in a way that is still relevant today. Tommy and his friends are denied entry to restaurants and the skating rink. The police harass them. They are constantly being addressed as “pachucos.” Most “anglos” view them as troublemakers. Regardless, the young protagonist and his community keep looking for opportunities. They yearn for a better place in American society, but the obstacles seem insurmountable.

From The Champ to Rocky, from The Set-Up to Requiem for a Heavyweight, Raging Bull, or Million Dollar Baby, I have never seen a boxing movie with a hero like Tommy. It may be because he is not a boxing hero. The film questions the very concept of what a hero is.

I won’t give any spoilers, but something that distinguishes The Ring from the boxing genre is that Tommy and most of his opponents are kids. Truly kids. That makes the fights disturbing. Another distinguishing trait is the existential question at the core of Tommy’s character: he doesn’t know whether he is or should be a boxer, or what else he can be if he doesn’t become one. This question about his identity reinforces his youth. Lalo Ríos, who plays Tommy, may not be the most skilled actor, but he is totally believable. He transmits the emotional vulnerability of his young character, his innocence, and his brave, if sometimes immature, determination. Irving Shulman’s great script—adapted from his own novel, The Square Trap—is understated and nuanced with Tommy’s dilemmas. Kurt Neumann, better known for The Fly (1958) and some of the Tarzan movies, directed the film. Even though the fights are not shot with the richness and precision of some of the more famous boxing films, they are painful to watch because of how the movie portrays Tommy.

Tommy’s father is against boxing because he perceives it as a profession without dignity, a “job for brutes.” The idea of the dignity of work is central to the movie, highlighting the work ethic of the Mexican community. The father has been laid off: “When an anglo gets old, he gets a promotion. When a Mexican gets old, he gets laid off,” he says. His dream is to own a small business: his own stand in Olivera St, his own space among the Hispanic founders of the city. A brief voice-over narration reminds us that Los Angeles was founded by Hispanic settlers around Olivera St. The street appears now somewhat degraded. Covered with stands that sell souvenirs to tourists, it’s a place that reinforces stereotypes by catering to the expectations of the “anglos.” There is one job there for Tommy’s father. He can pretend to be a Mexican sleeping on the floor, wearing a poncho and a big sombrero. The tourists find the lazy sleeping figure picturesque and authentic, even though it’s fake. From this very first scene we know that the movie sides with the Mexican community. The film never becomes heavy-handed or preachy. It simply shows the state of affairs. In a circular way, the movie ends in Olivera St. The images leave it up to us to decide what kind of an ending we see: happy, bittersweet, or bleak.

I wonder why the King Bros. produced this movie. The “colorful B-movie producers” were famous for low-budget, commercial successes. They also knew how to recognize talent and they could be risk-takers as they proved with movies like Gun Crazy and The Brave One (written by Dalton Trumbo while he was blacklisted, and earning him—under a pseudonym—an Oscar). Was The Ring a labor of love? Was it enough that it belonged to the boxing genre? Did the King Bros. know that there was an audience for this kind of film? B-movie directors and producers always seemed to have more freedom and they took advantage of it.

This movie is available for now on Amazon Prime. Watch it. With a light tone that underscores its toughness, The Ring is entertaining and enthralling, and it doesn’t let us forget the realities it portrays.

About the author: Ana Eire is Professor of Spanish at Stetson University in Florida. There’s hope she will be a regular contributor to this blog. More to come on that, but in the meantime I am thrilled Ana sent me this essay for the Hollywood’s Hispanic Heritage Blogathon hosted by me on this blog on September 29. Be sure to visit that day. 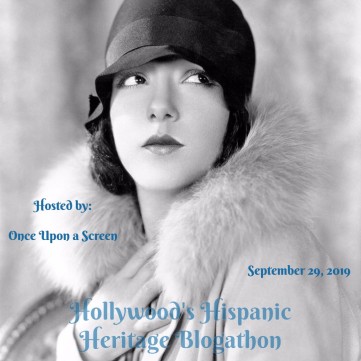