It’s 3 o’clock in the morning when a shot rings out and a body slumps over onto a desk. A woman stands at a stairway landing looking at the body. She doesn’t seem too upset given the circumstances, the apparent suicide of her husband. The woman walks over and picks up the letter left by the deceased, quickly looks through it and makes a phone call. Something sinister is going on and our attention is keen on the screen. The story that follows and the unfortunate events that occur result from that gunshot blast and the investigation that ensues. This is a story that draws you in instantly, the world of a tough, moral detective, corrupt politicians, seedy underworld characters, and a femme fatale for the record books, the world in Fritz Lang‘s taut, unforgettable The Big Heat (1953).

Based on a Saturday Evening Post series and novel of the same name by former Philadelphia crime reporter William P. McGivern with screenplay by Sydney Boehm, The Big Heat, is one of those movies I want to force everyone to watch. The action kicks off when detective Dave Bannion (Glenn Ford) becomes suspicious of another cop’s suicide. As Bannion begins to poke around he discovers a world of crime in which players are willing to go far and corruption that runs deep. This is an ugly world of bad people and the presentation is stark thanks in large part to terrific performances all around. Glenn Ford is perfect as the honest cop with violence simmering under the surface with Jocelyn Brando playing his innocent wife, Katie. Jeanette Nolan is great as the holder of secrets that can bring down the bad guys. As Bertha Duncan, the widow of the deceased cop, Nolan uses her husband’s suicide for gain and is as rotten as the worst of the bad guys and the worst of them is Lee Marvin as Vince Stone, the top henchman in the deeply entrenched syndicate run by Mike Lagana (Alexander Scourby) who is also appropriately menacing. By far the most memorable performance in The Big Heat, however, is delivered by Gloria Grahame. Fresh off her supporting Oscar win for Vincente Minnelli’s The Bad and The Beautiful, Grahame should have taken home Oscar again for her portrayal of gangster’s moll, Debby Marsh. Grahame’s Debby is also my choice for the Femme/Homme Fatales of Film Noir blogathon hosted by the Classic Movie Blog Association (CMBA) for which this post is intended. 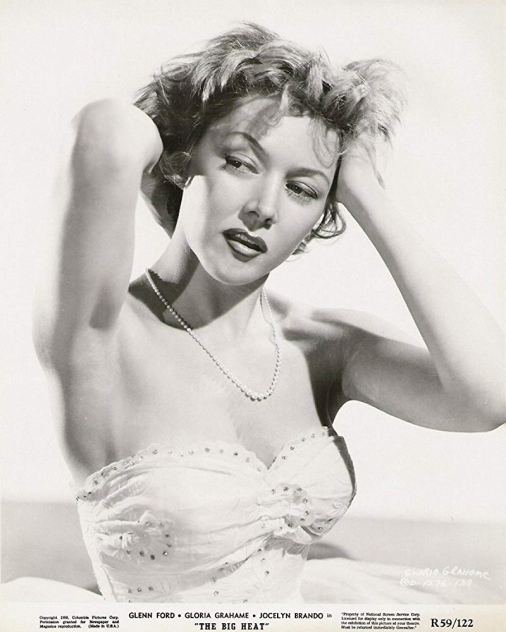 Gloria Grahame is such an interesting actor it’s difficult to peg her down. She had a natural earthiness about her and comes across as a modern woman, not necessary of the time her stories take place. Gloria can be naïve, coquettish, sexy, determined, and could cut any tough guy down to size. The Big Heat is Grahame’s first of two movies with Fritz Lang, the second being Human Desire in 1954 also starring Glenn Ford. It’s her Debby Marsh in The Big Heat that makes Grahame a noir icon following her other Oscar-worthy performance in Nicholas Ray’s In a Lonely Place. In both instances Grahame did not necessarily need to do a lot to portray multilayered characters and The Big Heat, in which she essentially plays two roles in one woman, is a great example of that.

In the first half of The Big Heat we see Debby as a beautiful, bubbly, airy girl who is putting up with some abuse from the thug she chooses to live with. One doesn’t get the sense that Debby’s naïve to the point of not being aware of her situation. Her wisecracks take care of that. Instead, we are assured that she puts up with abuse because of the lifestyle she enjoys like the mink coats and the penthouse. It’s a selective oblivion she lives in giving a bit of her own back when situations permit.

Gloria Grahame’s journey in The Big Heat is something to behold. She is the heart of the film while also transitioning into a vengeful femme fatale and ultimately into a saint and hero, settling the final score when Bannion cannot. The transition happens after a supremely disturbing scene, perhaps the most disturbing of any movie, when Vince Stone scalds her face with a pot of coffee. Debby later pays Vince back in kind and ultimately brings down the entire crime syndicate when she kills Bertha Duncan in one of the best scenes in the movie. “We are sisters under the mink” Debby tells Bertha referencing how they both sold their souls before she puts three bullets into the widow whose death guarantees the release of her husband’s suicide letter laying bare the details of the syndicate.

Debby Marsh is not only a memorable femme fatale, but one of the greatest movie characters of all time. The style with which the film is directed is magnified by the way Grahame moves in the film and her character’s tribulations throughout. Debby Marsh is so iconic, in fact, that Annette Bening recreated her for her character in Stephen Frears’ The Grifters (1990) down to a copy of the black Jean Louis gown worn by Gloria in the hotel scene when she meets with Bannion. And speaking of the costumes, note how Debbie Marsh is dressed in white when she is “bad” and in black in the second half when redemption is at hand. This not-so-subtle message illustrates Debby’s complexity. Also, when she’s “good” she commits a bad act. Redemption comes at a high cost. 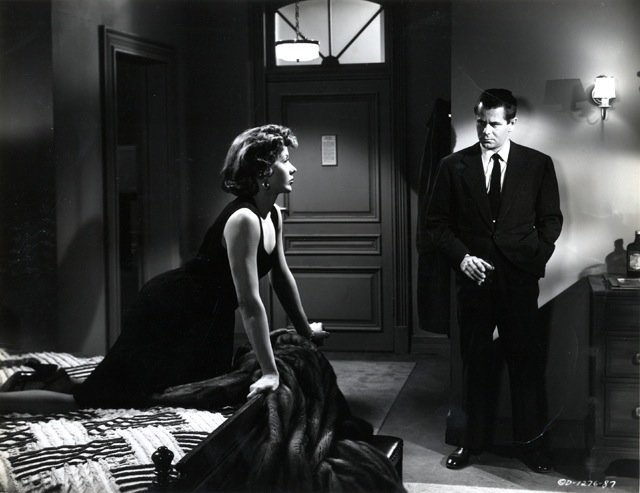 It’s 3 o’clock in the morning when a shot rings out, a body slumps over onto a desk and The Big Heat begins. The story that follows and the unfortunate events that occur result from that gunshot blast and the investigation that ensues. This is a story that draws you in instantly, the world of VICE…DICE…CORRUPTION! as the tagline of Fritz Lang’s thriller shouted. What should have also been spotlighted on those posters is a femme fatale with gravitas. That’s Gloria Grahame’s exceptional talent and she’s the best darn thing in a film that retains its power seven decades after it was released.

For the Classic Movie Blog Association Spring Blogathon, Femm/Homme Fatales of Film Noir, this is for those of you going through life sideways. 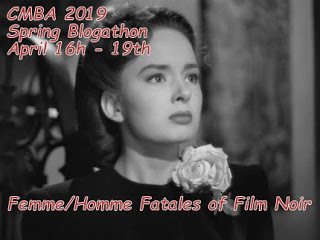