Kimberly Truhler is a Film and Fashion Historian who has been an expert for entities including TCM, the BBC, the National Film Registry, Christie’s, and the Fashion Institute of Design & Merchandising (FIDM) and was recently featured in CNN’s docu-series American Style. You can delve into the history of fashion in film on her site GlamAmor.com. I am delighted to have had the opportunity to ask Kimberly a few questions about that subject and the upcoming Oscars. I hope you enjoy this as much as I did putting it together.

A: What classic female actors have had the biggest impact on fashion?

K: I think it’s pretty easy to say that actresses like Marilyn Monroe, Audrey Hepburn, and Grace Kelly are style icons who everyone knows, even those not familiar with classic film.

A: What role did the studio system play in the impact of fashion, which was created by incredibly talented designers, who were also just hired hands?

K: Well, each studio had a head costume designer as well as other designers who worked on the productions. MGM had around 150 people working in the costume design department alone. The head costume designers generally came from the fashion industry. Howard Greer and Travis Banton (both head of costume design at Paramount), Robert Kalloch and Jean Louis (Columbia), and Vera West (Universal) all came from couturiers. During the Golden Age of Hollywood, the movies were the biggest influence on mainstream style, so what you saw onscreen became what women would wear in real life.

A: Today all you hear on the Red Carpet is “I’m wearing this or I’m wearing that.” I would think the old Hollywood studios wanted classic stars to pretend to be themselves, make audiences think that they made their own choices. Was that the case? Did designers get the credit in public that they deserved?

K: Crediting designers on the red carpet is a relatively new thing. During the Golden Age, the studio costume designers would also create gowns for the red carpet. It was more about people identifying with a star’s overall style -both on and offscreen – than it was identifying individual designers. The designers were there to support the studios and the stars. They were creating an illusion, a fantasy. That said, certain designers like Adrian had a style signature and people would become familiar with his work on the MGM stars.

A: How much free rein did old Hollywood designers have during the studio system?

K: There was no such thing as free rein. The approval process at the studios – production designers, directors, producers, studio heads – was intense. Of course the stars would always weigh in as well. And then there was the Production Code that was in effect, and costume designers had to work with (and often around) those rules. Often designs had to be pre-approved by those who enforced the Code, and they had the power to veto designs even when studios were in the midst of filming.

A: There were times in our country’s history that influenced Hollywood fashion immensely. The Great Depression and WWII come to mind. Yet, while many actors are political today, I don’t think politics – or where the country is – influences fashion in the same way. Why do you think that is?

K: The impact of the Great Depression and WWII on fashion wasn’t really about politics. During the Great Depression, Hollywood became a place of escape for the country – both in the aspirational visuals and theaters were a physical place to escape to. Costumes onscreen were pure fantasy, such as those on Ginger Rogers in her films with Fred Astaire. WWII was a time where the country all came together to support the war effort. It also was a time when fabric was rationed for everyone, so Hollywood costume designers tried to be conscious of this. There was a combination of designs that worked for every woman – the popularity of pencil skirts are a prime example of the impact of rationing on design – as well as continuing some aspirational glamour for 1940s audiences.

A: Beginning in the 1920s, if you had to choose one fashion trendsetter by decade, who would they be?

A: Even a non-fashionista like me recognizes Grace Kelly, Audrey Hepburn, and Doris Day as style icons. Who would you say is not talked about as one, but influenced fashion nonetheless?

K: Well, someone who is way under the radar is Kay Francis. She’s not a ‘name’ that’s known today, but her style can still be seen in fashion.

A: Marilyn Monroe. What can you tell me about her style and influence?

K: Marilyn’s star really began to rise in 1953 when she did 3 films – NIAGARA, GENTLEMEN PREFER BLONDES, and HOW TO MARRY A MILLIONAIRE. The last two were examples of her partnership with costume designer William Travilla. Marilyn had an incredible figure (obviously) so he really highlighted that. But he did so without revealing too much. As an example, you’ll notice her “Diamonds are a Girl’s Best Friend” gown only really reveals her shoulders. The 1950s was known for very feminine style (in contrast to the more austere 1940s) and celebrated an hourglass figure, and Marilyn was a perfect model of that. In addition to working with Travilla, she also worked with her makeup artist Allan “Whitey” Snyder who created that iconic look of hers that we all know today. Of course she was also just naturally gorgeous – she never took a bad photo – and had a vulnerability about her that made her appeal to both men and women.

A: Who would you say is the most influential classic male actor in fashion?

(Be still my heart)

A: I’ve been lucky to attend several of your fashion presentations both online and in person. You’ve mentioned the sad lives and or endings of several of the classic Hollywood designers. Why do you think that was the case?

K: Well each was an individual case, of course. But working in the studio system was intense. I already mentioned the extreme approval process they went through, and this could be really difficult for any designers who may have enjoyed a bit more autonomy designing in the fashion industry. Also the high number of movies that would be in production at any given time – it was a lot of work and all of it was high pressure.

A: You also mention the measurements or sizes of the classic actors as you discuss the history of fashion in film. In fact, I’ll recommend that people visit your GlamAmor.com for those great measurement charts you’ve created. But for today, explain how an actor’s size or shape influenced fashion back in the day and whose “size” would surprise us most?

K: That’s a slightly complicated question. I think we’re talking about two different things – height and measurements. Each era certainly had a silhouette that was popular. The 1930s liked a more lean figure whereas the 1950s wanted a more voluptuous woman. I think it’s the women’s heights that surprise people the most. The petite Veronica Lake at 4’11” or Joan Crawford at around 5′. Then there are the taller actresses – someone like Kay Francis who was 5’9″. What was incredible is that the costume designers (and the production teams) made these actresses all seem like they’re around the same height. But I’ll make a blanket statement – all these women were small as far as their figures go. It’s Hollywood. They like actresses thin. When you see their costumes in person, you realize just how small they were.

A: In your view, what is the most memorable actor-designer pairing in Hollywood history? 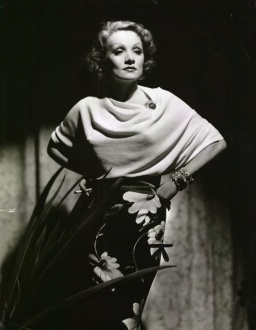 A: Is there a comparable pairing today?

A: What is your favorite decade in fashion?

A: What classic films would you recommend to a student of fashion?

K: When I taught THE HISTORY OF FASHION IN FILM at Woodbury University, it was based on my list of The Style Essentials. These are 50 films with iconic costume design that impacted fashion at the time they premiered and continue to influence fashion today. I invite people to visit my site to see the list.

A: As you know, the Academy Awards began as a small, intimate affair. I don’t think fashion was high on people’s minds when they reported the winners. When did fashion catch up to the winners in the news cycle?

K: It took a bit of time. It evolved through the 1930s. As soon as there was real publicity involved, and then you had the public lining up to see their favorite stars as they entered the event, fashion became very important.

K: It’s hard to narrow down current designers who are influenced by classic Hollywood because as my work shows, most of them are. That’s why I started teaching fashion students – the designers they looked up to were drawing inspiration from Hollywood costume designers and certain films. Ralph Lauren, Michael Kors, Zac Posen, Jenny Packham, Zuhair Murad, Elie Saab, Vera Wang, Giorgio Armani… the list goes on and on.

A: What current actor is most reminiscent of the classic period in her fashion choices?

K: Reese Witherspoon, Amy Adams, Jessica Chastain, and Charlize Theron often include some reference to Old Hollywood with their choices. That said, stylists are trying more and more to put their own touch on Oscar ensembles.

A: Your favorite Oscars look of all time is?

K: There have been a few. I’ll start with one from a classic film star – I loved Elizabeth Taylor in violet Edith Head in 1970. There have been some winners in recent history as well. Renee Zellweger in yellow vintage Jean Dessès in 2001. Charlize Theron in golden Gucci in 2004 and orange Vera Wang in 2000. Sharon Stone in a men’s white shirt and lavender Vera Wang skirt in 1998. Lupita Nyong’o in pale blue Prada in 2014. Of course Nicole Kidman’s chartreuse John Galliano in 1997 was a huge transitional moment for both her career and the modern Oscars red carpet.

A: Finally, what should the classically-inclined Oscars viewer look for on this year’s red carpet to recognize classic influences?

K: Honestly the entirety of the Oscars red carpet owes itself to Old Hollywood. The classic costume designers really created the template of what glamour looks like, so modern fashion designers and stylists turn to it again and again and again for inspiration.

A big THANK YOU to Kimberly for taking the time to do this. You can watch her on CNN in the recent docu-series, American Style. Those of you planning to attend this year’s TCMFF should make it a point to attend the Fashion in Film of TCMFF 2019 presentation given by Kimberly at the Women’s Club of Hollywood. For the latest news about fashion in the classic world follow Kimberly on Facebook here, on Twitter and Instagram @GlamAmor, and visit GlamAmor.com for details on her latest appearances and presentations. One will be her accompaniment of an upcoming Pre-Code series at the Egyptian Theatre in Hollywood. The specifics on dates are forthcoming.

This is my entry to the 31 Days of Oscar Blogathon hosted by Kellee Pratt at Outspoken & Freckled, Paula Guthat at Paula’s Cinema Club, and yours truly. The event takes place on February 22, 23, and 24. Lots of fun is in store. Also, be sure to watch TCM’s 31 Days of Oscar festival, which is in full swing. 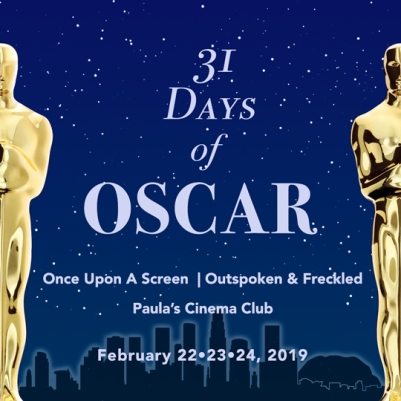