My history with time travel is deep, but it is fraught with confusion. Repeatedly, I have traveled to lands everywhere and across millennia with several Federation crews as a fan of Star Trek and at each turn I have gotten lost. The shame of that is a burden I carry with me always. It was the case when I first watched The City on the Edge of Forever, an episode of the original Star Trek series. In that episode a talking time portal called the “Guardian of Forever” takes Kirk, Spock and McCoy to Depression-era New York where we learn that no matter how painful, one cannot interfere with fate. It happened as I watched Tapestry, an episode of The Next Generation, in which Q allows Captain Picard the opportunity to re-do a decision that can save his life. It was present as I watched Voyager episode, Shattered, when the ship is fractured into different eras of its own history, which poses an enjoyable, but especially bewildering time for this fan. I understand the fascinating ethical and moral conundrums posed by time travel as well as the time and space logistics. It is the simple decisions that alter the time/space continuum that fall well outside my realm of comprehension. In order to correct that after many years of struggling I took a closer look at Robert Zemeckis’ Back to the Future trilogy, which offers basics for the time travel-challenged like me. Following are my observations.

Back to the Future is a sparkling adventure movie that has not lost its charm since its release on July 3, 1985. Perhaps a few of the topical visual jokes, which hit the mark in the 1980s are lost to some today, but one can see why Back to the Future was the highest-grossing film of the year and why is sparked two sequels, Back to the Future II in 1989, and Back to the Future III in 1990. Watching these films in succession not only brought back great memories, but also strengthened my time travel know-how.

Back to the Future begins in 1985, or what I call home base year. Michael J. Fox stars as Marty McFly, a teenager from Hill Valley, California whose best friend is lovable, eccentric scientist, Dr. Emmett “Doc” Brown, played memorably by Christopher Lloyd. Doc’s most important invention is the DeLorean he has turned into a time machine. This vehicle serves as the tool by which Marty and Doc travel through time in all three installments of Back to the Future. The time machine is rigged to transport to its pre-chosen year when it hits 88 mph with the place always being a historical or futuristic Hill Valley. I mention that because using the same town in all eras helps people (like me) understand when they are in the story.

Time travel in the original Back to the Future is simple, but each new installment brings transports that are more complicated. Our adventure begins at a shopping mall parking lot where Doc unveils the modified DeLorean, which is powered by plutonium. For details about the technology of Doc’s time machine, you’ll have to watch all three movies in the trilogy because they change depending on era. Anyway, just as Doc is showing Marty how the time navigation works by setting the clock to November 5, 1955, the Libyans from whom he stole the plutonium show up and shoot Doc. Trying to escape, Marty takes off in the DeLorean and when he reaches 88 mph, he transports to 1955.

The DeLorean Time Clock Setting in Back to the Future

The fun begins when Marty McFly lands in 1985 and runs into his own mother, Lorraine (Lea Thompson) and father, George (Crispin Glover). Marty begins to affect his future existence almost immediately because his mother falls for him. Hilarity ensues as Marty’s quest becomes ensuring that his mother and father fall in love with each other or he and his siblings will never be born. There is also fun to be had thanks to Biff Tannen (Thomas F. Wilson), the town bully and bane of the McFly existence. In the meantime Doc sets the stage to get Marty back to the future by powering the DeLorean with a lightning strike that’s set to hit the Hill Valley clock tower. They know the exact moment when the lighting will strike because of the future.

The story in Back to the Future II begins right after the one in the first movie ends. In fact, it begins on the exact same date in 1985 that the first story does, which means that when you time travel time does not pass in your home-base time/year. That’s a bit confusing, but anyway, Marty has just arrived back to 1985 from 1955 when Doc arrives in the DeLorean and convinces him and girlfriend, Jennifer (Elisabeth Shue) to go back to the future to help their future children. The trio arrive in 2015, but Doc immediately knocks out Jennifer so she does not realize what’s happening. In the meantime, old 1985 Biff saw the three fly away in the DeLorean, which means he learns about the car’s time travelling abilities. More on that in a moment. Marty is able to pose as his own lookalike son and refuses to take part in a robbery, thus saving his son from years in prison. By doing this Marty has completed the task, but he makes a grave mistake when he comes upon a sports almanac that lists all the winners of sporting events for the last several decades. Realizing the danger of having such information at hand, Doc convinces Marty to get rid of the almanac and he does, but Biff finds it and by doing so changes the course of history. This is a cautionary tale for anyone who has ever imagined getting his/her hands on lotto numbers in advance and a statement against time travel itself.

Doc and Marty return to 1985 to find decadence and degradation the orders of the day in Hill Valley. As it turns out 2015 Biff steals the sports almanac and using the DeLorean goes to 1955, gives the almanac to his younger self, and by doing so becomes a millionaire by betting on sports. Not only does Biff become owner of every establishment in Hill Valley, we learn he has killed George McFly and married Lorraine. In short, this 1985 Hill Valley is a complete nightmare. Doc and Marty reach the conclusion that the only way they can fix the future 1985 is to go back to 1955 to the exact moment when 2015 Biff gives 1955 Biff the almanac in order to prevent it. 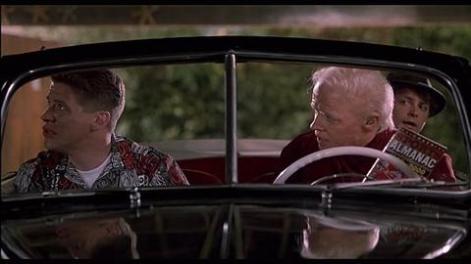 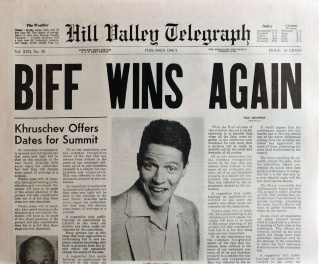 Recognizable adventures greet Marty in 1955 this time as he tries to recover the sports almanac from young Biff. The freaky part of this trip to the past is that the Marty in this second Back to the Future installment witnesses the happenings of the Marty that went to 1955 in the first movie. This is confusing because in all my previous experience with time travel alternate universes never meet. I think. These are clever scenes with an element of danger. Doc warns Marty to avoid running into himself or the time-space continuum will be irrevocably altered, but…huh? I’m not sure I understand how two Martys can share the same time and space in two separate realities while one can observe the other even though that happened in Star Trek too.

At the conclusion of the exhaustive conundrums Marty faces during his second trip to 1955, he and Doc go to their rendezvous point by the entrance of the Lyon Estates sign to execute their return to their base year of 1985. Marty burns the sports almanac thereby saving his family’s future from degenerate Biff and awaits Doc and the DeLorean to land. However, a problem occurs just as Doc attempts to land the time machine. Lightning strikes making Doc and the DeLorean disappear from sight. Marty is understandably bewildered and saddened at the idea that Doc is gone. As he stares at the sky where Doc was just a moment ago a car drives up the deserted road. A man gets out and hands Marty a letter. This is a “what the heck?” moment that took me a bit of time to digest. The man works for Western Union and tells Marty that they’ve had the letter in their possession for seventy years with specific instructions to deliver it to him at that exact time and place. Marty opens the letter and is immediately exhilarated as he reads the letter from Doc Brown dated 1885, the year to which the Doc is sent when lightning strikes the DeLorean. If I were Marty at that moment I would be very worried about being stuck in 1955 without a means of transporting back to home base year 1985, but this young man proves he has learned a lot from his friend and doesn’t miss a beat in recognizing where he needs to go for help. Doc in 1955.

You may remember that it was on the night of the lightning storm that Doc sent Marty back to 1985 in the first movie. Well, this is the same night and Marty remembers that at the same time that he receives Doc’s letter from 1885, the scientist is by the clock tower just having sent him home. Therefore, in order to go back to the future he has to go back to the past. Maybe that actually makes sense to somebody.

I’m not going to get into the details of Back to the Future III, but it follows the same formula as the others. III begins just as II leaves off and includes an enjoyable trip to the Old West where Doc Brown landed after the DeLorean disappeared from the sky due to lightning. The third movie in the trilogy adds Mary Steenburgen to the mix as Doc’s love interest and brings back the regulars from the other two in earlier incarnations. This one also features some terrific action sequences with a special ode to a classic train, the kind that was central to Old West travel and communications.

While Back to the Future II and III don’t quite live up to the original, which was chosen for preservation by the Library of Congress in 2007, the trio still offers a joyful time. It is definitely worth taking the trips back and forth through history with characters we care for. In addition, there are important lessons to be learned. For instance, I have often thought about what it would be like to go back in time and meet my parents as youngsters. Maybe even lighten their loads in life, but after watching the Back to the Future movies I’ve decided that may not be a good idea as it could easily result in my own non-existence. Knowing the lotto numbers in advance also doesn’t seem like that great of an idea anymore. Perhaps the greatest lesson of all, however, is a warning that I caution you all to heed. This is a simple lesson that if learned could save you a lot of time and grief. That is, if it is written that you should be covered in manure; there is absolutely nothing you can do about it.

Be sure to visit Silver Screenings and Wide Screen World for many more time travel adventures in the Time Travel Blogathon.