There’s little else I’d rather be doing on August 23rd than watching Gene Kelly dancing in any number of memorable musicals in Technicolor. When you have to work, however, that preference is replaced by the next best thing – radio. Mr. Kelly would have celebrated a birthday today and I’ve put together a few of his radio appearances in celebration. I don’t think you’ll mind my sharing them. Here’s Gene Kelly on the radio.

We kick things off with the Screen Guild Theatre production of “For Me and My Gal” in which Gene co-stars with Judy Garland:

Next is Gene’s guest spot on “The Kate Smith Hour,” which really ran for half an hour:

Now, it’s the Studio One presentation of “To Mary with Love”:

Three episodes of Suspense! I’m sure you’ll agree that it’s particularly entertaining to listen to Gene Kelly in a genre he wasn’t recognized for:

“Death Went Along for the Ride”

“The Man Who Couldn’t Lose”

Click on the movie poster for George Sidney’s ANCHORS AWEIGH (1945) to access the Lux Radio Theatre version in which Gene Kelly, Frank Sinatra and Kathryn Grayson reprise their movie roles: 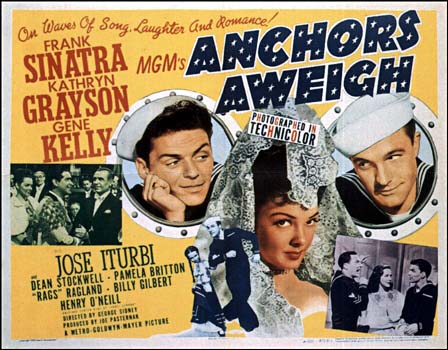 Here we have “The Victory Bond Show” with Bing Crosby and Gene Kelly:

Finally, a special presentation of Lux Radio Theatre from 1951 celebrating the motion picture industry’s 50th anniversary. Gene Kelly is one of the many Hollywood stars on hand for the occasion.

He was magic, like no man I’ve ever seen in the streets. Happy birthday! 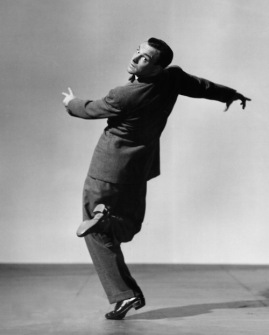