Here’s a look at my favorite Halloween episode of Bewitched, a fantasy/situation comedy series that ran on ABC from 1964 to 1972.  In case you’re not familiar with the show – it’s about a mortal who marries a witch.  And then a whole bunch of fun stuff happens.

Premise:  As the episode opens Endora wakes Samantha up to remind her it’s Halloween, a very important day for witches.  As witches the two are required to attend a yearly ceremony called the “sacred volcano.”  We all know that to Endora’s deep regret, Samantha has married a mortal and chooses to live her life as “normal” as possible.  But Endora insists that this is the one instance when she refuses to give in – Samantha must go or else.  Unfortunately, neither Samantha or Darrin heed the warnings and decide the “sacred volcano” is not that important.

Samantha tries to reason with Endora by explaining that she has to skip this year’s “blackest day of the year” ceremony because they are expecting company.  Darrin’s boss Larry Tate, his wife Louise and a client who happens to sell Halloween decorations are expected for dinner.  To her credit, Endora tries to ask Darrin herself – nicely – to see if anything can be done, but Darrin refuses to even listen.  He will absolutely not allow his expectant wife – yes, Samantha is expecting their first child – to travel all over the place for a witch ceremony.   Well, that’s all good and fine, but his refusal is the last straw.  Endora seeks revenge by turning herself into a little girl in a gypsy costume (played by Maureen McCormick of The Brady Bunch fame) and puts a curse on Darrin turning him into a werewolf. 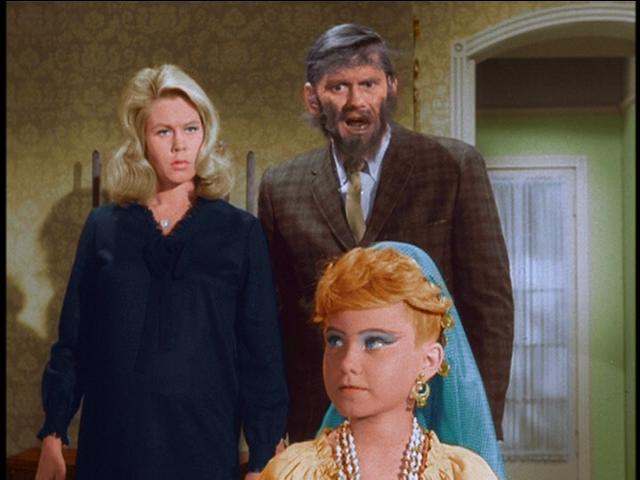 Naturally panic sets in knowing the Tates are bringing the client over so Samantha and Darrin plead with Endora to reverse the spell.  Endora’s not about to give in so easily, however, so she pretends to have forgotten the spell needed to reverse the werewolf curse.  When the Tates and the client arrive Darrin greets them as a werewolf. 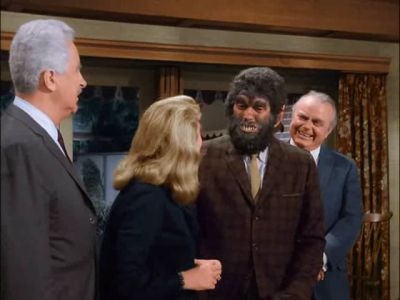 Much to everyone’s surprise the client is delighted with Darrin’s appearance. He thinks his host has gone all-out with the Halloween theme to impress him.  Meanwhile, ever more violent (and very funny), Darrin asks Samantha to lock him in a closet so he doesn’t hurt anyone.  Aside from the physical attributes Darrin also picks up the werewolf’s demeanor.

Darrin: If I get any worse, call the police.
Samantha: Oh, I couldn’t do that.
Darrin: Then call the zoo.

Endora stretches out the curse as long as she could in order to make Darrin suffer, but in the end everything in the Stephens household returns to normal.  Or at least, as normal as living with a witch can be.

Trick or Treat is a charmer of a Halloween episodes from this classic series.  There are some other fun ones to enjoy as would imagine in a series about witches.  But this one is particularly entertaining –  you have a werewolf (great make-up, by the way), trick-or-treaters and lots of magic.  The great, Elizabeth Montgomery, believable even in this oft-silly show and…who doesn’t love Endora?  She doesn’t get to go to the “sacred volcano” ceremony but she has plenty of fun punishing Darrin in this one.  Seeing this powerful witch’s reaction to Halloween and all its players is very entertaining.  For instance, there’s a trick-or-treater who threatens to put a spell on her and make her a tree – so, having some fun she becomes a tree.  Because she can.  And on and on.  Her wicked ways leave us bewitched, bothered and bewildered.  (I couldn’t help that.)

Despite the campiness (although I love camp!), there is some great acting and wonderful characters on Bewitched.  If you’re so inclined to visit the family who lived at 1164 Morning Glory Circle then do it at Halloween.  You’re bound to run into some fun hijinks.

Bees knees and bells knells
Harken to my tricky spell.
To prove your brain is the size of a pea
With all that you hear, you will agree. 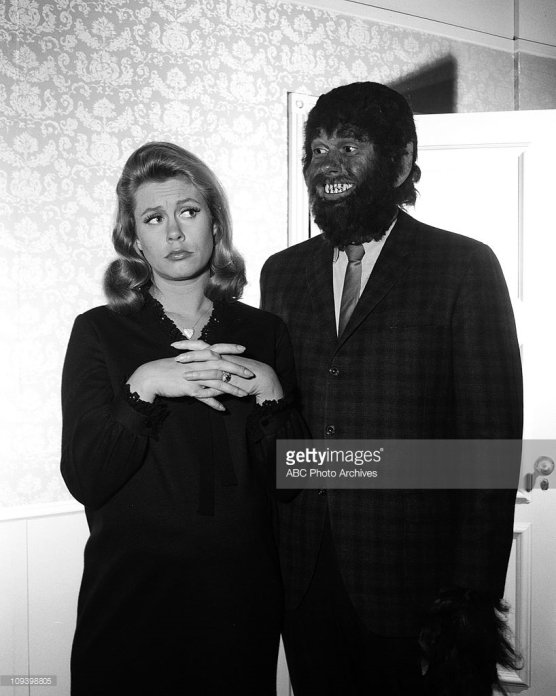 Audrey Hepburn (May 4, 1929 – January 20, 1993)
J. Edgar Hoover and Shirley Temple struck up an unlikely friendship. On January 20, 1949, when Shirley was around 20 years old, Hoover gave her a fountain pen that emitted tear gas
Loading Comments...
%d bloggers like this: