Not long ago I found a new-to-me old-time radio show called “Bright Star.”  I listened to every single episode of the show’s first and only season during a road trip and thought I’d introduce you to it today, the birth anniversary of one of its stars, Irene Dunne.

“Bright Star” was also known as “The Irene Dunne-Fred MacMurray Show” because…well…MacMurray co-starred with Dunne in the 30-minute comedy-drama that aired during the 1952-1953 season.  In it Irene Dunne plays Susan Armstrong, the editor of a struggling newspaper called The Hillsdale Morning Star.  Fred MacMurray plays George Harvey the star reporter who finds himself at odds with Armstrong over possible stories.

From the September 17, 1951 edition of The Progress, Clearfield, PA:

Hollywood News
By Gene Handsaker
HOLLYWOOD — Irene Dunne and Fred MacMurray have embarked upon new dramatic perils together — the first radio series for either of them. Irene let me hold her hand a minute to see how nervous transcribing just one hall-hour adventure had made her. The hand was icy.
Fred’s nervousness shows up more in fluffs. He stumbled repeatedly over the line, “just that right spot behind the ear.” (He’s telling, in the script, how he has just slugged a lion into unconsciousness.)
“Don’t know how I ever got to be an actor,” Fred confided later, speaking of mike fright. As for ad-libbing in front of strange audiences: “I still can’t get up in front of anybody.”
Irene and Fred will profit well from her cold hands and his verbal stumbling. An industry source says each should gross $300,000 from their “Bright Star” comedy series. She plays a newspaper editor, and MacMurray is her star reporter.
We went to lunch after this recording session and talked shop—their shop. MacMurray said he had risen at 4 a. m. on his ranch, driven to San Francisco, and taken an airliner here. They’d knock off another half-hour program that afternoon and another two the next day. They plan to record four programs a week on their initial commitment of 52. There’d be a month’s interruption, while Miss Dunne went to Italy for the Venice Film Festival.
The program is the type known in the trade as open-end, meaning there’s room at the start and finish for local commercial announcements. This leads to numerous taboos.
“We can’t have a line like ”Will you have a cup of coffee?'” Fred said. “There might be a tea sponsor in some town. For the same reason we can’t say ‘Have a cup of tea?’ — it might be a coffee sponsor—or mention any brand of automobile.”
Dunne and MacMurray have made two movies together. “Never A Dull Moment” and “Invitation to Happiness.” For some reason, they agreed, there’s an impression around that they have co-starred more often.
As we shook hands in saying goodbye, Miss Dunne’s were still chilly. They probably wouldn’t have been when she was younger. Youth is more sure of itself, she remarked, than maturity. 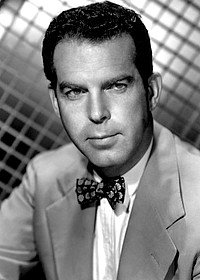 “The Irene Dunne-Fred MacMurray Show” is a charmer.  Given the popularity and talent of its two stars it’s somewhat of a head scratcher why it would only last one season.  The show features enjoyable scripts and terrific repartee between Dunne and MacMurray, guaranteed to offer an entertaining time for their fans.   Add to that the fact that it’s a nicely produced show with an outstanding cast of recurring supporting players including future TV staples Elvia Allman and Sheldon Leonard.

Following are a few episodes of “Bright Star” for your enjoyment.

“A Flower for Susan”