THE JAGGED MARK OF HIS SWORD STRUCK TERROR IN EVERY HEART – BUT ONE! 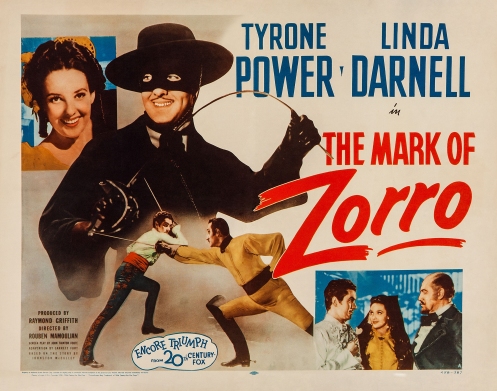 That’s a catchy tagline for Rouben Mamoulian‘s The Mark of Zorro, which serves a terrific ninety-four minutes at the movies!  This tale of chivalry and adventure with beautiful people, memorable (if familiar) characters and a snazzy, well-paced plot should not be missed if only for its ingredients, which are served in glorious, golden age style.

The Mark of Zorro is based on “The Curse of Capistrano,” a short story by Johnston McCulley that appeared as a serialized novel in the pulp magazine “All-Story Weekly” in 1919.  After the success of the story’s silent film adaptation in 1920, the novel was rereleased under the name The Mark of Zorro to begin the adventures of one of the most popular characters in media.

The plot – with spoilers!

Following a stylish title sequence Mamoulian’s story opens in a military training establishment in Madrid during a time “when the Spanish Empire encompassed the globe, and young blades were taught the fine and fashionable art of killing…”

The best pupil in the bunch is a dashing young man from California named Diego Vega (Tyrone Power).  Upon completing his military training with flying colors Diego is summoned back to California by his father Don Alejandro, a request the young Don Diego adheres to immediately.

During his travels toward home, which took quite a bit of time in the 1800s, Diego realizes something’s not right when he is met with fear and loathing every time he mentions he is the son of Alcalde Don Alejandro Vega.  Those responses surprise Diego who knows his father to be of noble and admirable character.  As his journey advances, however, Diego comes to the realization that those reactions are in response to the man who has forced his father from the Alcalde position, Luis Quintero (J. Edward Bromberg) who is now leading with a vile and corrupt hand, a man whose power is born of greed and violence.

Outraged by Quintero’s treatment of the peasants Don Diego takes matters into his own hands becoming a masked avenger, defender of the common people by night while pretending to be the indifferent, spoiled son of a rich landowner by day.

The guises adopted by Don Diego are multifaceted and not as simple to accomplish as one might think.  As a young aristocrat Diego sets forth to flirt with the Alcalde’s wife, Inez Quintero (Gale Sondergaard) in order to fill her head with romantic stories of Madrid.  Señora Quintero has long dreamt of going to Spain and Diego hopes she might convince her corrupt husband to leave his post as Alcalde and thereby restoring harmony to the land by naming Don Alejandro as his successor.  At the same time as Zorro Diego sets out to scare the corrupt Quintero at every opportunity while pretending to be in allegiance with him as the young aristocrat.  Further, Diego begins to romance the Alcalde’s niece, Lolita (Linda Darnell).  Lolita is almost as pretty as Diego and the two fall for each other in no time complicating matters for the Vega family who are none too happy to have their son fall for the niece of the enemy.  Don Alejandro (Montagu Love) and his wife Isabella (Janet Beecher) are already disappointed that Diego seems more interested in keeping up appearances as a nobleman than he is about the problems facing the country.

While Diego is flirting and romancing on one side, scaring the Alcalde out of his wits on the other he also has to contend with el Capitan Esteban Pasquale (Basil Rathbone) the brains and brawn behind Quintero’s iron hand.  As it turns out Alcalde Quintero is little more than a bumbling dictator afraid of his own shadow.  It is Pasquale as the Alcalde’s main henchman who also happens to be an accomplished blackmailer who leads the forces that steal from and abuse the masses.

There’s plenty of opportunity for us to see the growing hatred between both of Don Diego’s guises and the malevolent Capitan Pasquale who thinks of the young aristocrat as little more than a frivolous nuisance…at first.

…but when the two men put their feelings into action Don Diego proves more than a worthy opponent.

Promising to “make it short and save (his opponent) fatigue” Pasquale removes his jacket, puts on his fencing glove and shows off by swiping his blade at a burning candle breaking it in half so that the top falls to the floor.  Unruffled Don Diego mimics the action with the candle except that his candle is split, but stays intact, showing his superior touch with the weapon.  Ignoring the protestations of the fearful Quintero who cowers in the corner the two begin to spar and soon the Alcalde recognizes “the fencing master has met his equal.”  A stylish, beautifully choreographed, fast-moving fight ensues.  Similarly skilled Pasquale is able to hit his mark with a scratch to Diego’s shoulder, which serves to awaken the superior swordsman who’s able to best the scoundrel in the duel to the death – one of best (and my all-time favorite) sword fights in the movies ends with Zorro’s true identity exposed. 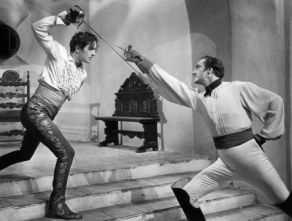 With Pasquale no longer a factor in his tyranny, the corrupt Quintero abdicates and runs off to Spain restoring power to Don Alejandro who has the backing of the people.  With the fighting behind him Don Diego concentrates on romance and forges a life together with his love, Lolita.  Zorro’s sword is laid dormant – for the time being.

By 1940 Tyrone Power had become one of Hollywood’s most popular leading men, fulfilling the wishes of 20th Century Fox’s Darryl Zanuck who’d searched for a male star to match the popularity of the studio’s top box-office draws, Shirley Temple and Alice Faye. Although Power would prove a powerful actor during his career, it was his matinée idol good looks that ensured his popularity with audiences for the better part of two decades, an idol enviable to both men and women.  In 1940 he’d prove a perfect choice to play Don Diego Vega and his legendary alter ego, inheriting the mantle of America’s favorite swashbuckling hero from Douglas Fairbanks.

One could argue that Tyrone Power is no Douglas Fairbanks who portrayed the masked Spaniard on the big screen in Fred Niblo’s silent version of The Mark of Zorro (1920).  Fairbanks’ depiction of Zorro is legendary and rightfully so, with the famed actor’s unique flair and athleticism taking precedence in the characterization.  As Zorro Fairbanks runs across rooftops and leaps through windows with ease making for what is perhaps the most artistic of the Zorro on-screen depictions.  But while the athleticism of Fairbanks’ Zorro is not present in the 1940, Mamoulian version it is not missed as this story goes more for elegance than it does adventure and in that regard one could hardly think of a better presence than Ty Power to portray the California nobleman who doubles as a masked avenger.  Power brings romance, humor and charm in notable fashion and creates a hero this fan never tires of watching.  It was the success of The Mark of Zorro that would ensure more adventurous, sword-yielding roles for box office sensation Tyrone Power like Henry King’s Technicolor triumph, The Black Swan (1942), another supremely entertaining swashbuckling movie.

There’s much more to enjoy about The Mark of Zorro than Tyrone’s star power.  The movie features a memorable pomp and circumstance-filled score by Alfred Newman who received the movie’s only Oscar nomination for his work.  The sets and costumes are lavish, true to the golden age production value and assured box-office draw.  Furthermore, supporting Ty Power is a wonderful cast led by Basil Rathbone who’s as memorable as Power as far as screen presence goes.  In fact, if one considers Tyrone Power one of the all-time great beauties of the silver screen then you must agree that Rathbone also possessed one of filmdom’s most stunning faces.

As a serious fencer in his own right Basil Rathbone brings unique style to several memorable swashbuckling movies like Michael Curtiz’s The Adventures of Robin Hood (1938) as well as to The Mark of Zorro.  Both feature fantastic final sword fights in large part thanks to Rathbone.  Incidentally, given his on-screen fighting against both Errol Flynn and Ty Power Rathbone was asked how well the latter did in the fighting scenes during which stunt doubles were not used. Rathbone responded, “Tyrone Power could fence Errol Flynn into a cocked hat!”  I love Flynn as much as I do Power, but this may serve as yet another instance when Ty didn’t get the kudos he deserved as an artist.  And looking competent with a sword on-screen is an art.

Also entertaining in their roles in The Mark of Zorro are J. Edward Bromberg as Quintero, Gale Sondergaard as his flirtatious wife and Linda Darnell is perfectly cast as the love of Don Diego’s life.  The pièce de résistance of supporting players here, however, is the great Eugene Pallette who plays Fray Felipe, the town’s religious leader and life-long friend of the Vegas. A welcomed addition to any on-screen story the mere sound of Pallette’s voice seems to produce endorphins.  In this movie Mr. Pallette looks a lot like he does as Friar Tuck in The Adventures of Robin Hood only in black and white and is just as entertaining.  In keeping to a swashbuckling theme (as noted below) I should mention that Pallette’s Fray Felipe proves a poor marksman compared to his Friar Tuck who for all his bulk does a decent job with a sword.  During the final battle scene between the townspeople and Quintero’s men Fray Felipe is seen whacking a Spanish soldier over the head with a club, instead of fighting with a sword, and delivering a “God Forgive Me!” for every whack.  And with that I end this story.

“How can I refuse a man anything with a naked sword in his hand?” 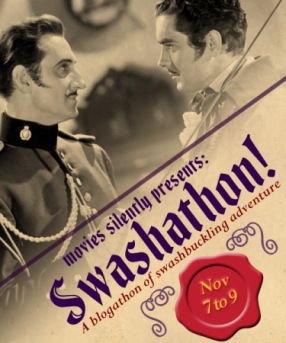