Fritzi of Movies Silently, a site dedicated to celebrating silent film is hosting The Shorts Blogathon this weekend.  As my entry I chose DO DETECTIVES THINK? a Fred Guiol-directed Laurel and Hardy comedy from 1927. 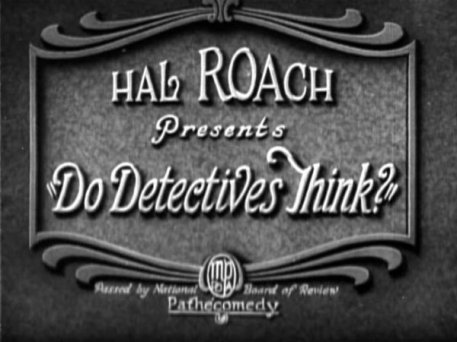 Because of the nature of this particular Hal Roach production I thought I’d offer a public service announcement for anyone who has aspirations of becoming a criminal court judge.  As a way to assess whether you’re doing a good job while on the bench you can use the following basic guidelines – you know you’re a terrible judge if…

In 1927 Judge Foozle did all of that and karma reciprocated.  While having a meal with his wife one day the judge sees the headline in the day’s newspaper – The Tipton Slasher, the man who’d threatened him, has escaped.  Fumbling for the phone the judge calls a private detective agency for protection.  “Send me your bravest men!” the judge yells into the phone, but what he gets is Ferdinand Finckleberry and Sherlock Pinkham, respectively the second worst and very worst detectives in the world.

Detectives Finckleberry (Oliver Hardy) and Pinkham (Stan Laurel) arrive at the judge’s house to ensure the man’s safety, but not before the Tipton Slasher arrives disguised as the judge’s new butler.  And then mayhem ensues as the Slasher tries his best to get to the judge’s tonsils under the noses of Finckleberry and Pinkham.

In the end all is resolved with regards to the Tipton Slasher and (SPOILER) the judge’s tonsils stay in tact, but getting there proves fun in a romp of a little film.

The bunglings of Stan Laurel and Oliver Hardy who were not yet an established team by 1927 is what makes DO DETECTIVES THINK? worth a watch although both James Finlayson (Judge Foozle) and Noah Young (the Slasher) are quite good in this.  By this point Stan and Ollie had co-starred in many films produced at Hal Roach Studios, but were still a few movies away from becoming an official movie team.  Interestingly, it’s director Leo McCarey who is most often credited with the permanent teaming of the two comedians, recognizing the terrific chemistry between them was worthy of a permanent teaming.  Also, according to every Laurel and Hardy historical article I read, DO DETECTIVES THINK? is considered by many to be the first, true Laurel and Hardy film even if the teaming wasn’t yet official.  For instance this is the first movie in which the boys wore the trademark derbies and (noticeably) the chemistry that would make these two my favorite comedy duo was already honed – to a degree as I must admit I prefer their talkies. 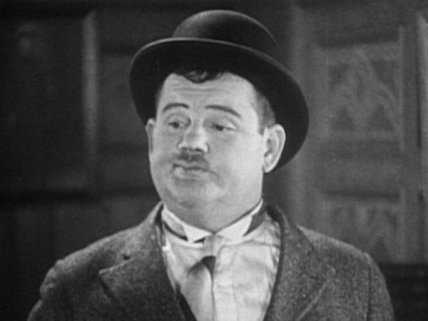 It’s worth noting that DO DETECTIVES THINK? allows as much screen time to James Finlayson – who can be seen in most Laurel and Hardy movies made at Roach Studios – and Noah Young, who makes for a scary murderer.  This is different from later productions starring Laurel and Hardy ‘the team,’ which center almost exclusively on them.

DO DETECTIVES THINK? doesn’t near the best Laurel and Hardy short.  In fact, what this served to do for me is whet my appetite for more, which resulted in my viewing several more of their shorts – just what I needed to cleanse my movie palate.  These two got funnier and funnier as I watched them grow into comedy legends.  But there is one long scene in particular in DO DETECTIVES that had me in stitches.  Picture this – the slasher, eager to get the bumbling detectives out of the way goes a round with the duo.  Pinkham manages to handcuff Finckleberry instead of the slasher during the scuffle, which is not unexpected, but watching the two jump on the criminal in the attempt to capture him is hilarious.  Stan’s signature crying face in fear and Hardy’s manner of looking straight at the camera whenever Stan does something dumb are wonderful.  I can’t get enough of these two.  But still – if you’re a judge and they show up at your house to protect you just quit your job and move to another country.

Finally – and by the way, if you’re wondering whether DO DETECTIVES THINK? answers the question posed by the title it does.  The answer is no – they don’t think, they react, which is what makes for great comedy.

This was short so you’ve plenty of time to visit Movies Silently and The Shorts Blogathon.  Loads of fun awaits!

Dana Andrews and Virginia Mayo stand by as cinematographer Gregg Toland and director William Wyler confer during the making of THE BEST YEARS OF OUR LIVES (1946).
Frances Farmer by Everett, circa 1937
Loading Comments...
%d bloggers like this: