Edward G. Robinson is best remembered for his portrayals of hardened criminals – and rightfully so.   When it comes to mugs and gorillas in the movies he’s as bad as they come.

“Some people have youth, some have beauty – I have menace.”

In truth, however, the cultured Robinson could play all types of characters in all types of films and no matter the movie or the size of the role he undoubtedly makes an impression.  As such I could have chosen any number of performances with which to honor the actor on his birth anniversary (December 12, 1893), but decided on what is (perhaps) a lesser appreciated effort, the 1940 crime farce, BROTHER ORCHID directed by Lloyd Bacon. 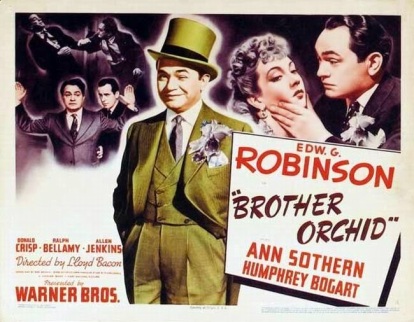 Now, I won’t go as far as to say that BROTHER ORCHID is one of Eddie G.’s best films,  but it is one of my favorites.  It is a movie in which Robinson delivers a performance that requires he use several bullets from his talent arsenal.  You get the familiar, hardboiled gangster with the sort of cultural snobbery only Robinson can offer – you get the lighthearted comedian and you get the softee.  Add the requisite gang of supporting underworld characters, a ditzy dame and some monks and you get a delightful movie.

Robinson plays Little John Sarto, the boss of a criminal empire who decides to retire to 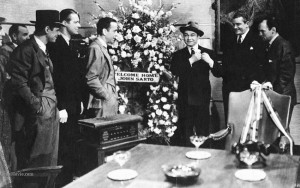 travel the world in search of class.  His goal is to become a socialite.  Sarto follows his heart, if you will, and becomes a player in a high-profile, crime-free life for five years after which he returns in hopes of picking up where he left off – professionally and personally.  A lot has changed, however, since Little John went off to Europe.  The seat he once held as the boss of the crime syndicate is now occupied by Jack Buck (Humphrey Bogart), the former second-in-command who’s none too thrilled about Sarto’s return.  So the former associates become rivals, which leads Little John to recruit as many torpedoes, mugs and gorillas as he can in order to wage war on Buck. 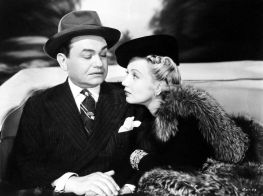 dependent on him prior to his travels is now a successful business woman.  She’s still in love with him, however, and is disturbed by the rivalry between Little John and Jack Buck so she sets up a meet between the two bosses hoping they’ll rekindle the friendship.  Flo tricks Little John into showing up at the meet to which – unbeknownst to her – Jack Buck agreed so he could get rid of Sarto once and for all.  The run-in between the two men doesn’t go as planned – Little John Sarto is shot, but he manages to escape finding his way to a monastery hidden in the woods.

and he soon realizes the secluded monastery is the perfect place to hide.  Little John Sarto renames himself “Brother Orchid” as the order of the flowers dictates and signs up as a novice, which requires – among other things – menial labor for which there is no financial payment.  Sarto doesn’t quite understand how or why the monks – who he thinks are the “biggest chumps in the world” – choose to live life in as simple a manner as they do – but over time he comes to recognize the value of simplicity, of giving for giving’s sake.  Just as they’d cured his body the brothers cure Sarto’s soul.  And as sappy as that may sound it’s anything but.

BROTHER ORCHID delivers sharp wit throughout whether it’s in the world of organized crime it depicts or in the cloistered monastery.  It also happens to be a charming movie thanks to Edward G. Robinson, the only actor who could have played this role so truthfully – that of a real gangster trying to “get” what the monks are about.  As Brother Orchid Sarto is filled with suspicion in regards to what the

monks’ racket is.  After all, the world he’s used to is fueled by cheating and double cross.  The contrast between that world, the one Sarto has known to that point and the cloistered lives of the monks lends itself to many funny moments.  Slowly, thanks to the example set by the monks Brother Orchid starts to recognize these men have no ulterior motives – “Oh I get it.  Nice mugs.”  But his journey is quite humorous as he is often confused, “OK, Warden…er…Brother Superior.”  Eventually the brothers make a convert of the gangster who sees that true joy in not in things, but in joy itself.  And the kind of class he’d never known existed, true class, becomes clear.  (By the way, talk about a class act in real life.  Edward G. – I mean, PHEW!)

The rest of the cast in BROTHER ORCHID (full list below) is quite good, terrific actors

all.  Ralph Bellamy plays Clarence Fletcher, a rich rancher who falls for Flo.  This guy is not unlike other roles played by Bellamy in other movies, but he’s still enjoyable.  As the rival gangster, Bogart also plays true to form here – for that time in his career in any case.  It’s a hoot to see Robinson and Bogart pair against each other in this, one of the five films they made together.  Incidentally, (SPOILER) BROTHER ORCHID is the only one of the five where neither one of them is killed.

The always affecting Donald Crisp also delivers a fine performance as Brother Superior, the gentle and wise leader of the monastery and Allen Jenkins who plays Willie the Knife, the one gorilla who stays true to Little John Sarto is also worthy of note.  Finally there’s Ann Sothern who’s terrific as the dizzy, big-hearted Flo Addams who delivers some of the funniest lines in the movie…

Flo Addams: Johnny, wait a minute. I want you to carry this with you.

Little Johnny Sarto: What is it?

Flo Addams: It’s a rabbit’s foot. A lucky charm. My uncle wore it for 32 years.

Little Johnny Sarto: A lucky charm, eh? Where’d you get it?

Flo Addams: From my mother. With her own hand she took it off of my uncle after they hung him.

So, watch BROTHER ORCHID.  If you’re the type of mug who plans to celebrate Edward G. Robinson then why not do it with this hardboiled gem filled with hilarity and heart.  It’s available for streaming on Warner Archive Instant, see.  And/or for an entire day of Eddie G. tune in to TCM tomorrow!

“To my mind, the actor has this great responsibility of playing another human being . . . it’s like taking on another person’s life and you have to do it as sincerely and honestly as you can.”