“My name’s Pete Kelly.  I play cornet.  You’ll find us at 417 Cherry Street, Kansas City.  It’s a standard speakeasy.  We got 35 cases of cut whiskey and a seven-piece band.  We start every night at 10 and we play ’till 6 in the morning.  It’s not much, but the contract runs out in June 1924.  After that there’s a place in South Chicago that may take us.

In the meantime we’re working here on Cherry Street.  The lease is made out to George Lupo.  His brother gave it to him after the funeral.  The kind of music we play started out as a back-room exercise in a little swamp stop called Myrtle Grove.  Laracca took his Dixieland Band to New York, but we got as far as Kansas City.  It’s no place to get off a train unless you’re a sack o’ mail…because around here everyone works at the same job – staying alive.  Half a buck buys a pair o’ socks, a spaghetti dinner or a down payment on murder.

So last night everything turned sour about midnight….”

And so begins this story, the one depicted in an episode of old-time radio’s Pete Kelly’s Blues titled “Little Jake” starring Jack Webb with story by Jim Moser.  That introduction sets the stage for an entertaining episode, which just like all the others features great writing and an interesting blend of wonderful moodiness and murder smothered in music.

As you may have surmised, Pete Kelly’s Blues centers on Pete Kelly, a cornet player who heads a jazz combo, “Pete Kelly’s Big Seven” at a Kansas City speakeasy run by George Lupo in the 1920s.  Kelly, played by Jack Webb, narrates every episode in the same fashion as classic noir voiceovers that grab you with catchy phrases and rapidly delivered cynicism.  There is always music present helping to create a terrific backdrop to the crime-ridden days depicted, days that evolve as Kelly gets involved with all types of shady characters – bad guys, badges, booze and babes – resulting in what is (for my money) one of the more entertaining 30 minutes of classic radio available.

“‘Pete Kelly’s Blues’ is, indeed, a powerful and direct answer to those who say radio is dead or dying.  It combines the best of crime drama, toe-tapping Dixieland music and suspense…it is radio at its best.” – Bob Foster, San Mateo Times (1951) 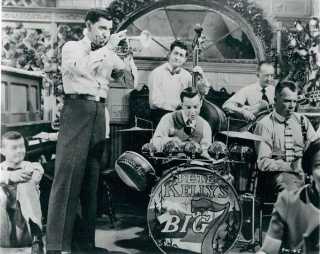 Pete Kelly’s Blues was conceived by Jack Webb and grew out of his love of Jazz and was created in collaboration with writer, Richard L. Breen.  Webb began his career as a late-night disc jockey playing Jazz records in San Francisco and spent a lot of time in Jazz clubs, which is (incidentally) how he met his first wife, actress/singer Julie London.  She was performing in one of those clubs at age 15 when they met.

Webb used both the music and City he knew so well to create the realistic atmosphere in the memorable noir Pete Kelly’s Blues.  The prohibition-era society depicted on the show is served well by the group of notable Jazz musicians that performed live in each episode. These include Dick Cathcart, Nick Fatool, brothers Ray and Moe Schneider, Matty Matlock and Bill Newman.  Listening to the music in Pete Kelly’s Blues is as enjoyable as Webb’s voice, one of the most recognizable in media history.  I might add that it’s inevitable that when you hear Webb’s voice as Kelly for the first time it’s jarring to realize he’s playing anyone other than Sgt. Joe Friday because that memorable monotone is so embedded in our minds and connected to that character.  However, it takes but a few moments to be engulfed in the world that surrounds Pete Kelly and then the actor is no one else.

Pete Kelly’s Blues premiered as a summer replacement series on NBC in 1951, almost two years after Jack Webb became a star on Dragnet and it delivers some of the same matter-of-fact crime details and Webb signature snappy comebacks, but (to me) it’s done in a much more entertaining fashion.  There’s a poetic style to Blues, enhanced by the music which again gives the show palpable atmosphere.  The announcer on the show is another familiar voice to all radio and television fans, George Fenneman who played a part in Dragnet – as did several of the other players involved in Blues –  but is perhaps best known as Groucho’s sidekick/announcer on You Bet Your Life.

Unfortunately, Pete Kelly’s Blues was short-lived, lasting only thirteen episodes probably due to the evils of television, which was already the predominant medium of entertainment by the early 1950s.  It’s too bad though that Blues was never given a chance to gain momentum.  Not only is it good, I’d say it’s my favorite of Webb’s shows, produced with the same attention the demanding perfectionist gave to everything he did.  Despite its short run, however, Blues would spawn several other projects that had varying degrees of success.  There was a 1955 movie of the same name directed by Webb in which he reprised the Pete Kelly role alongside an impressive cast – Janet Leigh, Edmond O’Brien, Peggy Lee, Andy Devine, Lee Marvin and the great, Ella Fitzgerald.  In 1957 a “Pete Kelly’s Blues” television show was given a shot, but like the radio version it too had a short life.  And then there were a series of Jazz albums that did quite well (and that I’ve downloaded thanks to listening to the radio show.)  I’ve never considered myself a Jazz fan, but the music in all Pete Kelly’s Blues incarnations is fantastic!  It’s no surprise that Dick Cathcart was nominated for a Grammy for the soundtrack of PETE KELLY’S BLUES the movie. 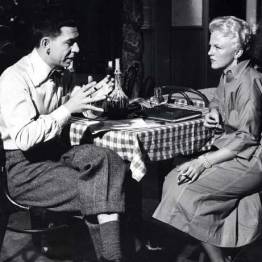 Webb and Peggy Lee on PETE KELLY’S BLUES, the movie 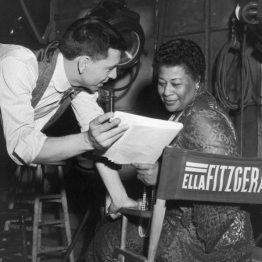 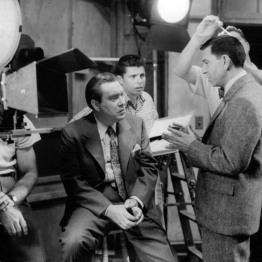 On the set on PETE KELLY’S BLUES (the movie) with Peggy Lee, Ella Fitzgerald and Edmond O’Brien 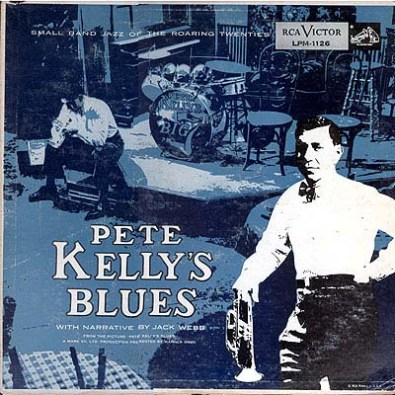 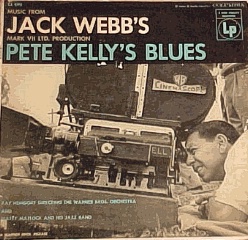 Most are familiar with Jack Webb and his unforgettable Sgt. Joe Friday on Dragnet, but if you’ve never listened to Pete Kelly’s Blues on radio you haven’t the full sense of how great this guy was.  For all its Webb familiarity if you happen to enjoy Dragnet for instance, Blues adds another dimension to his career.  Not only is the show a testament to the medium of radio as the quote (above) by Mr. Foster states, it seems to me a more personal endeavor for which he brought his insistence on truth in entertainment to another level.   I can’t say it often enough – whether you’re a fan of the actor/director/producer, a fan of great music, a fan of noir or simply a fan of great entertainment – Pete Kelly’s Blues on old-time radio is a must.

This is my submission to The Jack Webb Blogathon hosted by The Hannibal 8.  For ‘just the facts’ delivered by an impressive list of contributors, visit the host site.  You won’t be disappointed. 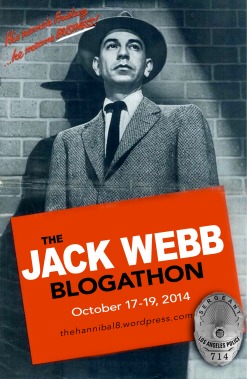