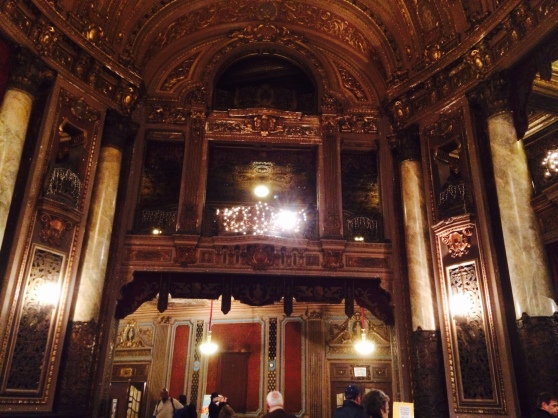 …specifically to watch Ted Wilde’s Speedy starring Harold Lloyd.  After seeing Why Worry? at this year’s TCMFF I vowed to watch as many Harold Lloyd films as I could.  But it turned out that the Loew’s had a few surprises in store for me, which made for a full night of fantastic entertainment.

The weekend’s programming at the Loew’s, which began with a Friday night screening of William Friedkin’s Oscar-winner, The French Connection (1971), was all about films that feature the New York City of yesteryear.

First on the bill on Saturday was Little Fugitive (1953), a film I’d never even heard of.

Little Fugitive was introduced by Mary Engel, daughter of two of the film’s three directors whose pride in the film was palpable even from several rows back.  Engel came back after the movie for a Q and A during which she discussed the lasting appreciation for 61-year-old movie directed by her parents, Morris Engel and Ruth Orkin and Ray Ashley.

Little Fugitive is about a seven year old boy named Joey (played by Richie Andrusco) who ends up spending two days alone in Coney Island because he thinks he killed his older brother, Lennie.  Lennie and his friends tricked Joey to get rid of him never thinking the boy would leave his Brooklyn home and venture off on his own to the fantastic and scary world of Coney Island.  We spend almost the entire film watching this boy as he experiences adventures of days gone by, which makes for a compelling, endearing film.

Adding to the charm of this film is the style used to film it, a verite feel that resulted from the use of a specially created 35mm camera.  Little Fugitive took a total of five weeks to shoot, mostly due to the fact the directors actually waited for rain, which plays an important part in some scenes.  Mary Engel mentioned, in response to one of the questions, that her father directed the 7-year-old Richie by filming him while giving direction with the actual sound and dialogue in the film synced later.  I wondered about this while I watched the film as the boy’s actions are allowed to play out with a beautiful, patient flow as one would experience with music.  I hope that makes sense.  And the actual music heard throughout the film is supplied by a harmonica, which is perfect to enhance the mood and story depicted in the film.  As someone used to Hollywood productions, and this movie was completely independently produced, I was blown away by the depth that came forth from the screen from this movie’s simplicity.  Everything about this movie works.  Since it’s so difficult to explain, just get your hands on it and watch it.  Little Fugitive.  It’ll charm even the most cynical among you.

By the way, I was joined at the screening of Little Fugitive by my friend, Rich (@ratzo318) of Wide Screen World.  Rich just published a great post on this screening and film that’s a must read.  Not only does he add details about the movie that I don’t include here, but due to Rich’s own ties to Coney Island his write-up is particularly poignant.

In keeping with the weekend’s theme, Loew’s Jersey sprang a little surprise before the second feature when Bernie Anderson, who was about to accompany Speedy on the Loew’s Wonder Morton, announced that they would precede the Lloyd movie with Roscoe “Fatty” Arbuckle’s 1917 short, Coney Island.

There’s really not much to say about this particular Arbuckle short, except it’s a typical Arbuckle/Keaton/St. John outing that guarantees laughs.  The “Keaton” and “St. John” refer to frequent Arbuckle co-stars, Buster Keaton and Al St. John.  The story in Coney Island is a bit convoluted, but story matters little when you have such great slapstick talents on a stage.

In Coney Island Roscoe is married to a woman (Agnes Neilsen) he’s tired of so he tries to get away from her – and succeeds – so he can spend a fun day in…well, Coney Island.  Meanwhile, Buster Keaton arrives with his girlfriend (Alice Mann) who is taken away from him by Al St. John who I think is a friend of Roscoe’s wife.  But then Roscoe takes the girl away from Al.  All includes prat falls, carnival schtick and water aerobics.

What stood out for me most in Coney Island was seeing Buster Keaton on a big screen before he was the great stoneface.  It threw me for a loop the first time I saw him laugh here.  He also cries.  I know!

I have to add that this Arbuckle short has a fantastic opening sequence that features gorgeous shots of an illuminated Luna Park.  I had to look that up because the nightscape featured in the opening didn’t look similar to images I’d seen of the old Coney Island.  In any case, the shots in the movie are both fascinating (because they’re so old) and impressive (because they’re so old).  You think I like old stuff?

Rich had to leave after Little Fugitive, but joining me for the latter part of the night’s program was friend, blogger and all-around media enthusiast, Will McKinley (@WillMcKinley) of Cinematically Insane.

After the Roscoe Arbuckle short we were treated to Harold Lloyd in Speedy with live organ accompaniment on the Loew’s Wonder Morton.  Maestro Bernie Anderson not only performed a fantastic score, but also introduced the film. 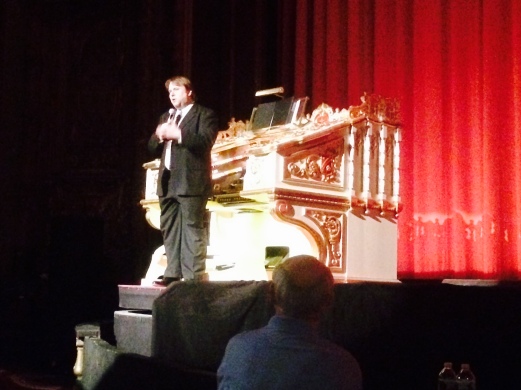 Speedy (1928) was Harold Lloyd’s last silent film and another I highly enjoyed.  Lloyd plays Harold “Speedy” Shift, a nice guy with a big heart who can’t hold down a job.  He has a girlfriend, Jane (played by Ann Christy) who lives with her grandfather (Bert Woodruff) who runs the last horsecar line in New York City.  The old man’s horsecar route prevents the evil bigwigs who own the electric trolley from expanding so they hire heavies to get rid of the old man’s horsecar.  Speedy learns of the sinister plans and saves the day.

I really enjoyed the story depicted in Speedy although I think I would have enjoyed just watching the different scenes showing Lloyd’s gags just as much.  There are plenty of great gags and chases throughout the film and Speedy’s earnest attempts to succeed at various jobs are utterly enjoyable.  For instance, while working as a soda jerk he insists on having a phone nearby so he can keep track of the baseball scores, which he then displays with donuts and pretzels so the guys who work in the back can also be up on the scores.

I particularly liked Speedy’s stint as a taxi driver, which lasts only a day but includes what I thought was the funniest scene in the movie as we see him, desperate for a fare, try to pick up a guy who’s involved in a fight.  It’s a hoot!  Also enjoyable is his running into Babe Ruth and giving him a wild taxi ride all the way to Yankee Stadium.  The real Babe Ruth!  Who, by the way, according to Bernie Anderson, was filmed hitting the 53rd of what would be a 60-homer year for him in ’27.  Bernie actually did the math based on the days during which the Ruth scenes were filmed.

So, we get a glimpse of the old Yankee Stadium in Speedy, which as a Yankees fan is great enough, but there’s plenty to enjoy of the rest of old New York as well.  Speedy was shot entirely on location so it’s a fantastic ride through Manhattan of yesteryear.  Recognizable, popular spots include the Wall Street area, Columbus Circle and the New York City subway which Speedy and Jane take on their way to Coney Island.

So, what else can I say?  I loved Speedy.  And there ended my evening – in a gorgeous movie palace watching classic films about the City I grew up in.  It just doesn’t get any better than that.