Divorce.  An ugly business.  It turns love into hate and dependency into burden.  Facts that are never truer than when young ones are involved – when they are forced to choose between those they love most.

Mr. Smith, or Smitty, as his friends and family know him, has to grapple with this difficult situation one afternoon in the case of Warriner vs. Warriner.  The judge decrees the divorce proceedings over when the plaintiff’s attorney brings “the matter of Mr. Smith” to the court’s attention.  Now forced to decide his own fate, Smitty is escorted into the courtroom.  He must choose between the two people he most loves – his caregivers, his confidants, and his playmates. Standing in the courtroom, head whipping from Lucy Warriner to her soon to be ex-husband, Jerry – an impossible decision must be made.  Suddenly, Smitty runs to the wife (the why won’t be divulged) and she gets sole custody.  Three lives change. Surely, he’ll be taken care of, but Smitty is now part of a broken home.

OK.  So that was all dramatized for effect.  That scene and situation is from one of the best 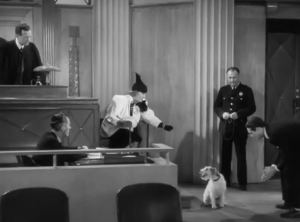 screwball comedies from Hollywood’s golden age, 1937’s The Awful Truth from Columbia Pictures.  Mr. Smith, the protagonist in the scene described above, is played by loyal companion and male about town, Skippy – best known for his portrayal of Asta in the first two installments in The Thin Man series (later Astas were played by look-a-likes.)  Skippy’s costars in The Awful Truth are classic powerhouse talents, Cary Grant and Irene Dunne.

By now you may have surmised The Awful Truth is about a married couple, Jerry and Lucy Warriner (Grant and Dunne), who begin divorce proceedings due to unfounded suspicions on either side.  Throughout the film, the couple remains on the “outs” as they await the

finalization of their divorce.  Hilarity ensues.  At different times embarrassed, annoyed and amused by each other and what each thinks of new romantic involvements – he, with a socialite, Molly Lavant (Barbara Vance) and she, with an oil-rich country bumpkin, Dan Leeson (Ralph Bellamy).  The Warriners do their best to poke fun and spoil the day.  Their commentaries, most often “inside” jokes no one else is privy to, a barrage of trips, falls and misadventures – all performed to perfection – and just too numerous to mention, result in movie magic.

The Awful Truth, released in the U.S. on October 31, 1937, is the first of three films that Cary Grant and Irene Dunne made together.  They followed The Awful Truth with 1940’s My Favorite Wife, another great screwball comedy and the romantic drama, Penny Serenade in 1941.  Adept at physical comedy, with impeccable comedic timing and delivery, possessing wonderful acting skills and musical prowess, Grant and Dunne would be enjoyable to watch together in almost anything.  Dare it be said that Ms. Dunne may well have been Mr. Grant’s greatest costar, matching wits and presence with one of the most talented stars to ever grace the silver screen.

Despite Irene Dunne’s talents,however, she is not the only costar in The Awful Truth that comes close to stealing scenes from Cary Grant (imagining that were possible).  The other, a star with an impressive career of his own, is Skippy.  The wire-haired terrier had seven films to his credit by the time The Awful Truth was released.  Comparable to many stars of The Golden Age, and far out-shining most stars of today, Skippy was a genuine triple threat.  Although he had a penchant for comedy, his range was quite remarkable.  He could do drama, sing, and dance with the best of ‘em.  He also had impeccable comedic timing in his own right – all of which he is called upon to exhibit in The Awful Truth.  Aside from playing the object of the two main characters’ affection, Mr. Smith plays a vital role in the fast-paced story, often acting as spoiler to the plots of deceit between the couple, ever funny as they might be.

Skippy’s role in the film, a supporting but key one, ensures continued interaction between the film’s stars.  Mr. Warriner was given visitation rights to his beloved pooch, you see, so he is always present and accounted for (thank you Smitty!).  It’s also worth mentioning that the couple would not have met in the first place if not for Mr. Smith.  Both fell in love with him in a pet shop on Madison Avenue – you know the one I mean.  It was between 47th and er…48th…er.  It’s frightfully immaterial, in any case.  The point is, they saw him, they dated and they became a family and lived happily ever after.  Well, until the divorce.  There would be no awful truth without Smitty.

Not unlike other screwball comedies of the 1930s, The Awful Truth was very well received by critics and audiences alike and became a big hit.  The film received six Academy Award nominations – Best Actress, Irene Dunne, Best Supporting Actor, Ralph Belamy, Best Film Editing, Best Screenplay, Best Picture and Best Director, Leo McCarey.  The film’s director being the only one to take home the coveted award.  All the Oscar nods are well deserved in this case.  There is no need to mention the travesty that neither Cary Grant nor Skippy received Oscar nods for their work in this film.  So it will remain unmentioned.

Interesting trivia worthy of mention is that The Awful Truth was made twice before this 1937 release and three other times overall.  First, as a silent film with the same title in 1925, then as an early talkie in 1929 also with the same title, and later remade as Let’s Do It Again in 1953 starring Jane Wyman and Ray Milland.  Our film, the 1937 version, remains the most popular and acclaimed.

Films like The Awful Truth are simply not made anymore – a definitive screwball comedy.  It’s difficult to remember when the last great film in

this genre was made, a genre that, to quote a song in one of the funniest scenes in the film, has “gone with the wind.”  This film is smart with hilarious dialogue delivered with razor-sharp clarity and speed, which often sounds improvised.  Accounts are that the script for the film was sketchy, at best, when presented to the actors.  If this is true then it could not have been left in better hands.  Add to all that an A-lister list Skippy (uncredited in this film, by the way, which is unbelievable), a stellar supporting cast and the glitz and glamour inherent in these classic films and this becomes a comedy for the ages.

This write-up is my contribution to the Classic Movie Dogathon hosted by the fabulous Classic Film & TV Café.  This is my first ever “a-thon” so thanks to Rick for helping me get my paws wet.  Initially, I’d submitted three choices to write about.  The Awful Truth was my last.  Since the first two were taken, this was the loser’s choice.  But, as it turns out, herein lies a clear case where to the loser went the spoils – and the laughs.  The Awful Truth is a riot from beginning to end.

Before you go, I encourage you to take a look at the other entries in the Classic Movie Dogathon.  The schedule is available here.  It is a sure thing you’ll find an enjoyable read at every turn.  Reviews submitted by passionate cinephiles that know their movies and the canine stars that continue to fill us with joy and wonder.

In honor of Skippy and all the other animals who have brought all of us film fans so much joy through the years, here is the link to the North Shore Animal League America. They do amazing work rescuing animals and finding homes for them where they can be loved and give love.  Visit – volunteer – save a life.