My summers are not complete without a trek to Rome, New York where movie fans gather in a 1,788-seat 1928 movie palace to watch movies presented in 35MM. It’s bliss at Capitolfest, which is enjoying its 17th edition this year and if you haven’t attended you’re missing out on a fantastic experience.

I’ve been able to convince a few other fans of the merits of Capitolfest, but my job is not done. The affordable, relaxing festival is serious classic business where rare movies are shown with originality in mind as the 1928 decor is filled with the sounds of the original 10-rank Möller organ. You have not heard music played to film until you hear world renowned artists like Avery Tunningley, Dr. Philip C. Carli and new to Capitolfest this year, Ben Model play the Möller. You cannot help but be transported and filled with a love of film when all of this comes together in Rome.

Capitolfest dedicates each year’s festival to a featured star with this year’s edition choosing two, a special treat indeed as they are the fabulous Joel McCrea and Frances Dee with their son Peter in attendance. Mr. McCrea will introduce films and do a question and answer session with the audience. Betsy Metzgar, docent at the Joel and Frances McCrea Ranch will also be at Capitolfest this year and I cannot wait to spend time with her. In addition, Victoria Riskin, daughter of Fay Wray and Robert Riskin, will be on hand to introduce films and sign copies of her book, Fay Wray and Robert Riskin: A Hollywood Memoir. Finally, Cora Sue Collins will be there for a question and answer session with the audience. Collins starred in Louis J. Gasnier’s The Strange Case of Clara Deane (1932), one of the Frances Dee offerings at the festival. There are several other special screenings and events planned before, during and after the Capitolfest weekend, which runs from August 9-11, so be sure to visit the Capitol Arts Complex site.

Before I get to the movies I’m most looking forward to, I have to mention the Capitolfest dealers room, featuring films, videos, posters, and other memorabilia, which will be open throughout the weekend. Bring a bit of extra cash if you can manage it. There’s lots of terrific stuff to choose from and breaks throughout the festival allow for plenty of shopping and perusing time. In fact, the leisurely pace is one of the things that makes Capitolfest so unique. Attendees take breaks together, have meals together, and kvetch about movies together. It’s great fun.

Most of the films at Capitolfest come from archives such as the Library of Congress, Museum of Modern Art, UCLA Film & Television Archive, and Universal Pictures, as well as from private collections. Restoration and print details are always shared with the audience before each screening. This year’s films range from a silent 1917 short to a 1945 Joel McCrea vehicle, a wider range of years than one usually sees at this festival, but you have to expect more talkies given this year’s featured stars. All of the talkies are rare films, however, and most – if not all – will be new to me. Following are my pre-fest choices, but I say that for fun because I’ve yet to be disappointed at a Capitolfest screening. In fact, I am usually surprised by the movies I enjoy most. We’ll see what those are this year.

This year’s festival kicks off with what sounds like a delightful entry, William Seiter’s Helen’s Babies from 1924 with baby Peggy, Clara Bow and Edward Everett Horton accompanied by Ben Model. Friday also offers John Cromwell’s Rich Man’s Folly (1931) with George Bancroft and Frances Dee and the festival’s most recent offering, Lewis Allen’s The Unseen (1945) starring Joel McCrea and a fantastic supporting cast led by Gail Russell. I have to say though that the newly restored Captain Blood from 1924 directed by David Smith may be a highlight of the festival. 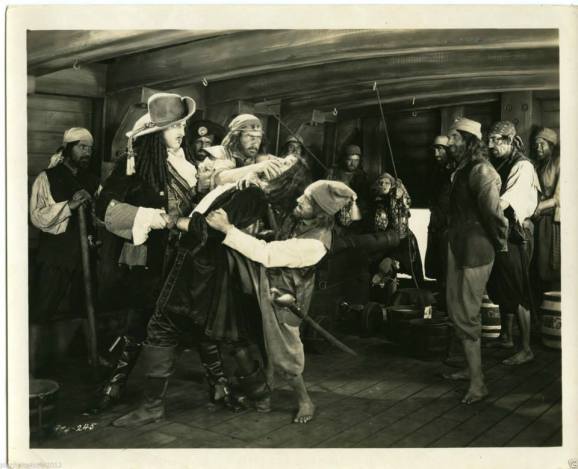 The Saturday program is replete with treasures. I don’t know if I can pick just one possible favorite. Richard Sloman’s Caught! (1931) starring Richard Arlen, Louise Dresser as Calamity Jane, Frances Dee and Tom Kennedy sounds fantastic as does Alfred Santell’s Interns Can’t Take Money (1937), a precursor of MGM’s Dr. Kildare series, with McCrea and Barbara Stanwyck. That one is followed by Constance Bennett and Joan Crawford in Edmund Goulding’s Sally, Irene and Mary from 1925. See what I mean? I might also enjoy C. C. Coleman Jr.’s Legion of Terror immensely. Cannot wait.

The final day of Capitolfest offers a few interesting movie prospects. I’m leaning toward (and away from) Ludwig Berger’s Playboy of Paris, a 1930 musical comedy. This one features Frances Dee and the ever enjoyable Eugene Pallette who, to my delight, always manages at least one entry at this festival. The negative of this one for me is Maurice Chevalier who is certainly charming and has been in early pictures I’ve enjoyed, but he smiles way too much. We’ll see how I do.

Two of my favorite directors have pictures featured on Sunday. George Stevens’ talents make an appearance with Boys Will Be Boys (1932) with Frank Albertson, Sally Blane, and Richard Carle. John Ford is represented with Kentucky Pride, a horse racing melodrama that received decent reviews in 1925.

All too soon the weekend will end, but we will all be that much richer in the way of the movies. If you’re attending, be sure to say hello and let me know what you are most looking forward to. Also, I’ll be covering Capitolfest on this blog and across social media – via @CitizenScreen and Citizen Screen and Citizen Screen on Twitter, Facebook and Instagram respectively. Give me a follow.

A movie palace, 35MM, music, laughter and tears are all part of a cinephile’s summer highlight and they are all in Rome in August. After several years of lauding this festival, I realize I’ve little new to add. Just be there! Also, be sure to take a look at this lovely Capitolfest write-up by my friend Toni at Watching Forever.

From a previous year’s post, here’s what others think of Capitolfest: