When Debbie from Moon in Gemini announced The Winter in July Blogathon I immediately chose James Parrott‘s Below Zero (1930) starring comedy legends Stan Laurel and Oliver Hardy. I hadn’t seen the two-reeler in years and thought it merited a revisit. When I sat down to watch it, however, I decided to watch the Spanish-language version instead so that my mother, who is visiting from Miami, could also enjoy the boys in her spoken language. The decision proved a great one as the Stan and Ollie’s phonetic pronunciation of Spanish from the cue cards used lent itself to hearty laughs on its own.

Filmed simultaneously with Below Zero and also directed by James Parrott, Tiembla Y Titubea translates loosely to Tremble and Shudder (or Stutter, Stammer). Dubbing and subtitling films for foreign markets was not yet standard in 1930, as you may well know, so many early talkies were also made in different languages. As is the case with Tiembla Y Titubea, these foreign-language versions often included scenes cut from the English versions. Because of this Tiembla is nearly a reel longer than Below Zero. George StevensSince he later become one of my favorite directors, I should be mention that photographed both versions of this short and did a fine job of it.

Tiembla Y Titubea begins with a scene at a police station featuring Enrique Acosta as the Police Chief and Bob O’Connor as the Policeman. The two men are discussing the cop’s work and you see a close-up of his wallet, which plays prominently later in the story. Acosta does not appear in Below Zero at all and O’Connor plays a restaurant extra rather than the cop he portrays here. In contrast, Below Zero starts out in the freezing cold as we see people brace themselves against the weather as they exit the building next to which Stan and Ollie are situated.

Tiembla Y Titubea  also includes a fairly long scene involving a blind man and a hat-switching routine not included in the English version. Aside from those differences, however, the story and the trouble Laurel and Hardy get into are the same in both.

It is the winter of 1929, a severe one that will not be forgotten. Mr. Laurel and Mr. Hardy are street musicians trying to make a buck. The snowy winter weather is not helping their efforts and the passersby are barely paying attention to their rendition of “In the Good Old Summertime,” which is a poor choice of song and seemingly the only one they know. The two start their playing enthusiastically, but it soon becomes clear they are annoying those around them. First there’s a man shoveling snow, then a woman who lives in the building in front of which they are playing, and later a large, angry woman (Blanche Payson) who destroys their instruments. At every turn the song begins anew with Ollie foot stomping the one-two with increasing anger. Also at every turn no money is made. The two try a couple of different spots on the street with similar results and usually end up with snow on their faces. One of my favorite moments is when they decide to move to a second, hopefully better location and Ollie realizes that the spot they’d been playing at was in front of the Deaf & Mute Institute.

Hopeless without instruments after the woman all but attacks them, luck shines upon Stan and Ollie when they find a wallet. The duo invite a policeman to a meal because the public servant saves them from a thief. However, it is the policeman’s own wallet the two are planning to use to pay. Needless to say it doesn’t turn out so well once the cop finds out they have his wallet. In the end Stan ends up with an unlikely physical condition after the two are thrown from the restaurant on their keisters.

Tiembla Y Titubea is not Laurel and Hardy’s best effort, but their charm is enough to carry you through with a wide smile on your face. Not to mention my mother loves them and has memories of watching them as a child in Cuba. In every language Ollie’s reaction shots alone are worth the price of admission as is the chemistry between these two comedy giants. No matter which version of Below Zero you watch, it’ll no doubt cool your hot summer day with a dose of laughter.

Be sure to visit The Winter in July Blogathon at Moon in Gemini and thanks to Debbie for this terrific idea. I’m heading there right now! 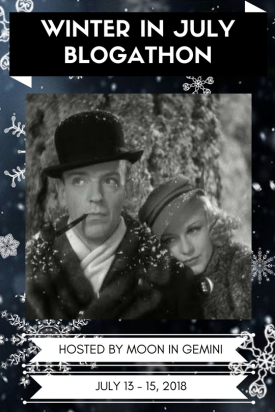