Robert Redford’s directorial debut was the screen adaptation of the 1976 novel by Judith Guest, Ordinary People. What drew Redford to this story is the fact that it spotlights people who care more about what’s outside than what’s inside. A meticulously manicured lawn is paramount to them, but they do not care to look inside the house, sort to speak. Of course, he explained that a hell of a lot better. 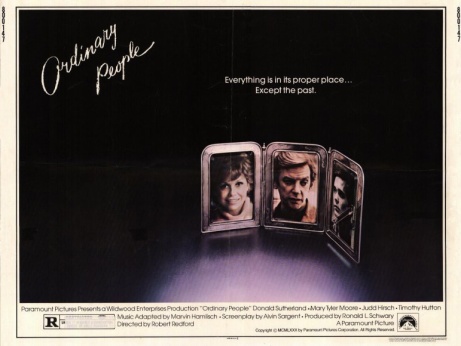 Redford told his story and he told it with extraordinary care and perception. The result was a critically acclaimed movie, which received six Academy Award nominations and four wins. Ordinary People took home Oscars for Best Picture, Best Director (Redford), Best Supporting Actor (Timothy Hutton), and Best Writing, Screenplay Based on Material from Another Medium (Alvin Sargent). Mary Tyler Moore received a nomination for what would be her most famous film role, a brilliant, utterly distressing portrayal of Beth Jarrett. The other Oscar nomination went to Judd Hirsch who plays Dr. Berger, the psychiatrist and friend of young Conrad Jarrett (Hutton). You may have noticed that the only main actor in Ordinary People not recognized by the Academy was Donald Sutherland whose touching ordinariness makes him the most relatable character in the movie.

I just watched Ordinary People again after many years and found it as moving as I had remembered. What I did not remember was how good Sutherland is in it. I think that when people think about the movie what comes to mind are the performances of Moore and Sutton, the volatile, obviously wounded, on the brink or painfully empty members of the Jarrett family. However, since I chose to spotlight Donald Sutherland’s performance in Ordinary People for the O Canada! Blogathon I re-watched this movie with his character, Calvin Jarrett, specifically in mind. Sutherland, a native of Saint John, New Brunswick, delivers a steady, quiet performance against which the turmoil breaks.

We are made privy to the lives of the well-to-do Jarretts following two tragedies. Oldest son, Buck, drowned while out at sea with his younger brother, Conrad, who tries to kill himself over his unbearable guilt. As the movie opens, we see life for the Jarretts returning to normal following Conrad’s release from the hospital. There are parties to attend, tennis and bridge to play, swimming meats to win and family meals to get through, all of which become more and more difficult as each day passes. Beth pretends there is nothing wrong, her hollowness manifested by concerns of outward acceptability. Conrad struggles with his guilt, unable to sleep, or connect with other people. Calvin floats somewhere between them, an ordinary man who appeases – always for the moment and always inarticulate – because what lies in between, what lies within him – are the lies they are living. The Jarretts are on a perpetual quest to avoid the heart of the matter. When Calvin breaks so do we because added to the tragedy is his deep disillusionment, the last hope that the Jarretts can survive as a unit disappears with him. Had Sutherland not provided his trademark quiet steadiness to that point, had he not been as believable as the average, awkward dad who wants to do and feel all the right things, then he would not have been the only hope of survival for this family. And he is. Calvin’s journey in Ordinary People is the saddest in a deeply moving movie.

Donald Sutherland told GQ magazine in 2014 that he did not get the first ever offer for a film in 1962 despite a great audition. The reason? The role called for a “guy-next-door” sort of character, and they did not think Sutherland looked like he had ever lived next door to anybody. That’s probably the reason why, as Donald said of his early career, “I was always cast as an artistic homicidal maniac.” As his career progressed, however, the one thing Sutherland proved is that he has enormously versatility. His breakout role was Hawkeye Pierce in Robert Altman‘s M*A*S*H (1970), which called for a certain degree of eccentricity. Sutherland delivered another fine performance in Alan J. Pakula‘s Klute (1971), in which he plays a police officer working freelance trying to figure out a missing persons case. Following that came more thrillers like John Schlesinger‘s The Day of the Locust (1975), horrors flicks like Philip Kaufman‘s Invasion of the Body Snatchers (1978), historical dramas like Oliver Stone‘s JFK (1991) and many others on big and small screens during his six decade career. No matter the role, whether leading a major troupe or in supporting capacity, Donald Sutherland’s memorable physical presence (he’s 6’4″) and his ability to be both eccentric and average, has ensured he could never be typecast. The disappearance of some of that is what makes Sutherland’s performance in Ordinary People so memorable. Sutherland’s long, lanky frame takes on a heaviness that diminishes it in his portrayal of Calvin Jarrett. Contrary to what those producers thought at the onset of his career, Donald becomes the quintessential next-door neighbor, the one for whom I bleed.

James B. Sikking as Ray Hanley

Be sure to visit Silver Screenings and Speakeasy this weekend as the O Canada! Blogathon entries pour in. EH.

Tony Curtis and Piper Laurie in a publicity shot for Douglas Sirk’s NO ROOM FOR THE GROOM (1952)
NORMA SHEARER BY GEORGE HURRELL, 1932
Loading Comments...
%d bloggers like this: