It’s been a while since I visit with my favorite TV detective and his brilliant crime-solving techniques. Today I correct that with a look at Étude in Black, the first episode of season two of Columbo, which originally aired on September 17, 1972. Étude in Black was directed by Nicholas Colasanto (best known for playing Coach on Cheers) and features John Cassavetes as the murderer du jour and Peter Falk as the one and only Lt. Columbo. 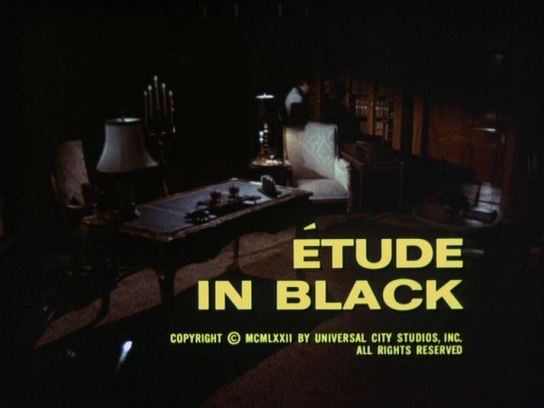 A teleplay written by Steven Bochco and story by Richard Levinson and William Link, Étude in Black highlights the murder of Jenifer Welles (Anjanette Comer), a promising concert pianist who’s having an affair with married orchestra conductor, Alex Benedict. The two plan to celebrate their last secret evening together as our story begins to unfold. Jenifer believes that Alex has decided to leave his wife Janice and Alex believes he will get away with Jenifer’s murder. Neither of those beliefs are correct. Jenifer Welles ends up dead because the talented Maestro never intended to get a divorce from Janice, or to let her find out about the affair at all for that matter. So Alex, who’s not as brilliant as he might think, sets forth to make his planned murder a reality.

Right before his concert is to start Alex Benedict slips out of the concert hall and into Jenifer’s house as she’s playing a beautiful piece on the piano, which is situated near her cockatoo, Chopin. Without making a sound Alex opens a briefcase, puts on white gloves, wraps an ashtray in an olive-green, cloth napkin, walks back to Jenifer and bashes her head in. It’s all beautifully done. Artistic even, as Alex lunges dressed in black tie and tails.

I hope I don’t sound too macabre when I say that Jenifer’s is a pretty fantastic murder. I mean, the dramatics of it. We don’t see the actual blow, but as soon as it happens we hear sudden, loud music and Chopin’s shriek. It’s constructed beautifully and the effects are chilling.

After the act is done Benedict labors to make Jenifer’s death look like suicide by gas asphyxiation. He places her on the floor of her kitchen and turns on the oven. We know this type of cover-up is never a good idea and bound to complicate things, but the Maestro accounts for every detail. He even measures how far Jenifer’s body would have needed to fall off the stool she supposedly sat in during the asphyxiation in order for her body to land right in front of the oven door. Once that’s done Benedict places the previously typed suicide note in the typewriter and leaves… BUT he drops his boutonnière and doesn’t notice. At this point it’s a bit disappointing to think that such a meticulously constructed murder might be in jeopardy of reveal due to such a small thing as a carnation. In any case, Benedict’s grim realization that the pink carnation is missing from his lapel during that night’s performance makes up for it in spades when over the sounds of the orchestra we again hear the shrill squeal of the cockatoo, a not-too-subtle reminder of impending doom.

Alex gets the news of Jenifer’s suicide along with everyone else. Poor guy is guilt-stricken as he had cursed Jenifer earlier for being late to the night’s performance. It was during that charade that Alex Benedict made a terrible mistake by calling Jenifer to see what was keeping her and – with Janice sitting nearby – knew her number by heart. Idiot! Alex remains clueless about Janice’s knowledge of his affair, however, and is confident that his murder plans will be successful. There’s just one little problem…the police Lieutenant who’s assigned the case doesn’t buy it.

“But that’s me, I’m paranoid. Like every time I see a dead body, I think it’s a murder. Can’t imagine anyone murdering themselves. Especially a young girl like that, beautiful eyes. But that’s me. I’d like to see everyone die of old age.”

Columbo gets the murderer in the end as we know he will, despite Alex Benedict trying a last-ditch effort to avert Columbo’s attention from his path when, quite suddenly, another musician, Paul Rifkin (James Olson) becomes the suspect with Benedict playing “sincere” defender. By the way, the scene where that “new” suspect comes to light offers one of the few scenes ever in a Columbo episode where the Lieutenant is caught, quite obviously, by surprise. No worries though, it doesn’t last long.

Étude in Black is highly enjoyable and a hugely popular episode among Columbo fans with good reason, but it is not flawless as other episodes might be. Despite the memorable, theatrical murder, the set-up is weak, too flawed right from the get-go. I mean, everyone knows – or knew in the 1970s – that placing a previously typed note into a typewriter will cause misalignment problems. And this turns out to be the case at the end because, of course, Columbo notices! The alibi in this case is also weak. Still, Étude has a lot to offer fans of the brilliant detective and fans of classic movies. For one, the cat-and-mouse exchanges in Étude in Black are great fun. As is the case with many Columbo villains, Alex Benedict offers way too much information to the Lt., but unlike a few of my favorites this villain doesn’t get angry or lose his cool, which is a bit unsettling. Even his last scene – the GOTCHA! – is restrained as Benedict who, when resigned to his fate, offers the Lieutenant his due…“Goodbye, genius.” Cassavetes plays Benedict with subtlety, with the subdued righteousness one thinks a supreme artist should possess. Of course, he’s not righteous. What he is is a murdering cheater and a cheating murderer. 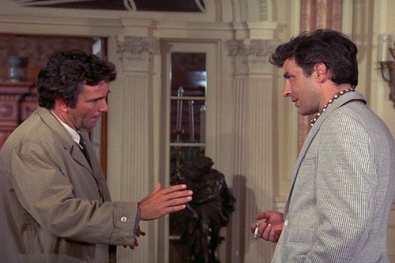 What makes Étude in Black historic in the pantheon of Columbo greats, however, is the fact that it holds dear to all our hearts the debut of Dog, the Lieutenant’s beloved nameless pooch. When we first see Columbo in this episode he’s at the vet’s office where Dog is getting a shot. Dog appears throughout the episode and it’s a real treat, he’s the perfect best friend for our Lieutenant. By the way, in this episode we also learn that Lt. Columbo’s salary is $11k a year, which is equivalent to about $64.6k today. 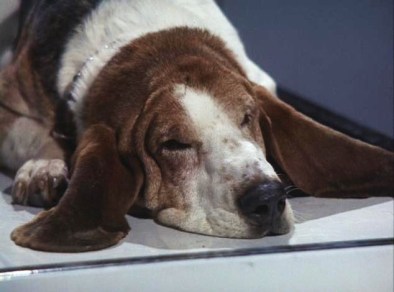 Another plus for Étude in Black is the music, which is especially good given it is directly involved in the plot of the episode. By far the musical highlight of this episode, however, is Columbo playing chopsticks.

One last thing – or maybe two. I can’t stop. I try my best to make these posts unique but in truth a large part of what make Columbo episodes such treats for fans are the formulas they adhere to. An element of that formula is the guest star or stars, many from classic Hollywood film fare, that appear in the episodes. Étude in Black goes beyond that. The “regular” cast is great – no need to mention how memorable Peter Falk is because that’s just a given. Here you get an enjoyable cameo by Pat Morita to add to the terrific turns by the main players. In addition to Cassavetes in Étude, Blythe Danner delivers an affecting performance as Benedict’s stoic wife who, left with no other choice, faces the music (pun intended) in the end. The scene where Janice comes to the realization that her husband is a murderer is painful to watch.

And then…I’ve left the best for last. My absolute favorite part of Étude in Black – aside from Dog – is the appearance of the great, Myrna Loy. Ms. Loy looks, sounds and is great as Lizzy Fielding, the snooty head of the symphony board and Janice’s mother. Loy yields a lot of power here. She – in essence – holds the reigns of Alex Benedict’s life and career as she is both his boss and his mother-in-law. Now you see exactly why Benedict couldn’t let Janice find out about his affair. It would have cost him a lot more than his marriage. Anyway, it is an absolute joy to see Myrna Loy here – that upturned nose and the familiar delivery. Love it!

Until next time, Goodbye, genius.