Before I recognized His Magnificence, or as you may know him, Cary Grant – and before I knew Irene Dunne as one of Hollywood’s great talents, I was in love with Penny Serenade (1941).

I must warn you that this may be one of those times when my emotions defeat any semblance of coherent writing I may possess. I have a deep affection for George Stevens’ 1941 heartbreaking melodrama, a movie I watched many times throughout my childhood since I was about 6 years old. This many years later my torch has not diminished for Penny Serenade, the third and last cinematic marriage between Dunne and Grant, the two actors I believe to make up the perfect film couple. Serenade takes quite a leap from the broad comedy that rules the pair’s first two outings – Leo McCarey’s The Awful Truth (1937) and Garson Kanin’s My Favorite Wife (1940). In Penny Serenade we get a story about the trials and tribulations of a couple who struggle to stay together after the death of their child.

It’s been my experience that the mere mention of Penny Serenade causes people to shrink back in alarm, a severe avoidance reaction that few movies elicit. The reason for that being that Penny Serenade is seen as a weepie, as they used to refer to movies that make people cry, because it does make you cry. But it is also much more than that. This is a beautifully woven tapestry of nostalgia, where the tears are supplemented by joy and charm and beauty. I submit Penny Serenade as my choice for the “No, you’re crying!” blogathon hosted by Moon in Gemini for the tears, but I offer this post in honor of one of my all-time favorite movies for everything else I see in it.

Penny Serenade was produced and directed by George Stevens for Columbia Pictures. One of the all-time greats, a Stevens story always offers a stylized visual precision and memorable performances fostered by a master of emotion. George Stevens’ pictures range from melodramas to screwball comedies with many that stand among the best of the golden age. Yet for some reason, Stevens remains mostly overlooked himself. He is the Penny Serenade – if you will – of those belonging on the Mt. Rushmore of directors. This is one reason why this movie is worth a second and third look as Stevens brings his staging perfection to each and every scene. I find myself pausing often when I watch Serenade to digest his use of otherwise inconsequential objects to balance a shot – a ladder placed in front of the actors in several scenes or the way he places the actors slightly off-center to frame the perfect composition or how he uses columns and doors throughout the movie to frame the actors. Perhaps Serenade offers simple examples of George Stevens’ keen eyes, but it’s still a worthy study.

In addition to Penny Serenade being a beautifully photographed movie, there are affecting performances across the board. As noted in American Masters, “Stevens was forever hoping to affect his audience’s emotions rather than his producers’ wallets.” Does he deliver here?  And how!

Adept at everything from screwball comedy to drama, Irene Dunne came to Penny Serenade fresh from My Favorite Wife and delivers the performance that grounds the movie. The journey depicted in Serenade could have easily fallen off the sappy slope if not for Dunne’s convincing portrayal. The memories we are made privy to are prompted by Julie Gardiner (Dunne) playing records on an old gramophone. As we are taken back through her memories we experience the deep pain that has gotten her to this place and time, but we also live through the joys. The entirety of what we are served illustrates that Julie’s has been a life imperfect, but a life well-lived. What few mention about Penny Serenade is that it starts off as a sophisticated comedy with instances of screwball tossed in for good measure. As is the case of most people’s reality, it is rarely all bad or all good. Ms. Dunne, however, is all good at every instance.

There is an IMDB notation on the trivia page for Penny Serenade that says that Irene Dunne said that this was her favorite movie because it reminded her of her own adopted daughter. I hope that’s true. In some way it gives the movie credence in my mind as a deserved, noted entry in the careers of two of our greatest actors. 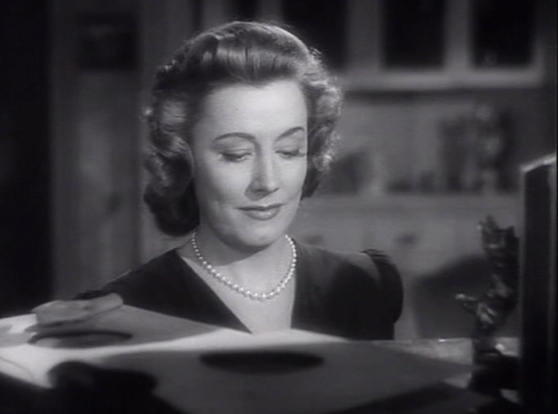 Cary Grant preceded Penny Serenade with George Cukor’s The Philadelphia Story (1940). How’s that for range? From a sophisticate in an unforgettable comedy of manners to one of, if not the, best dramatic performances of his career. Mr. Grant received one of his two Academy Award nominations for Best Actor in a Leading Role for his performance in Penny Serenade and with all due respect to Gary Cooper, the winner in 1942, Grant deserved the trophy. Not only does Cary exhibit his brand of physical prowess here, but he also shows he’s capable of breaking your heart in convincing fashion when Roger and Julie are in danger of losing their daughter.

As is the case with all adoptions, baby Trina is given to the couple on a one-year probationary period during which time they are frequently visited to ensure the child is being properly cared for. There’s no worry there. She is loved. But just as the time approaches when they are to attend the final adoption hearing, it comes to light that Roger’s printing business has folded. The family has no income.

The day comes when a judge is to determine whether Roger and Julie are adequate parents to Trina. There is no way they will be able to keep the child in a home that cannot provide for her. But Roger, who attends the meeting, pleads with the judge in a scene that Grant knocks out of the park. Voice heavy with emotion, Roger’s desperation at the thought of losing his Trina, the child who has stolen his heart, will render you weak in the knees.

I attribute some of Grant’s terrific performance in Penny Serenade to the wonderful on-screen connection between he and Dunne. They is not one misstep between them. As in the comedies they made together, the story flows between two consummate professionals as comfortable with their roles and with each other as two actors could be. I might add that whatever spell Irene Dunne cast on Cary Grant onscreen is ever deeper in this drama. Mr. Grant, who forged one of Hollywood’s greatest, most admired careers, excelled at being average while also becoming the epitome of sophistication. He has never been more average than he is in Penny Serenade. And he kills it with tenderness. 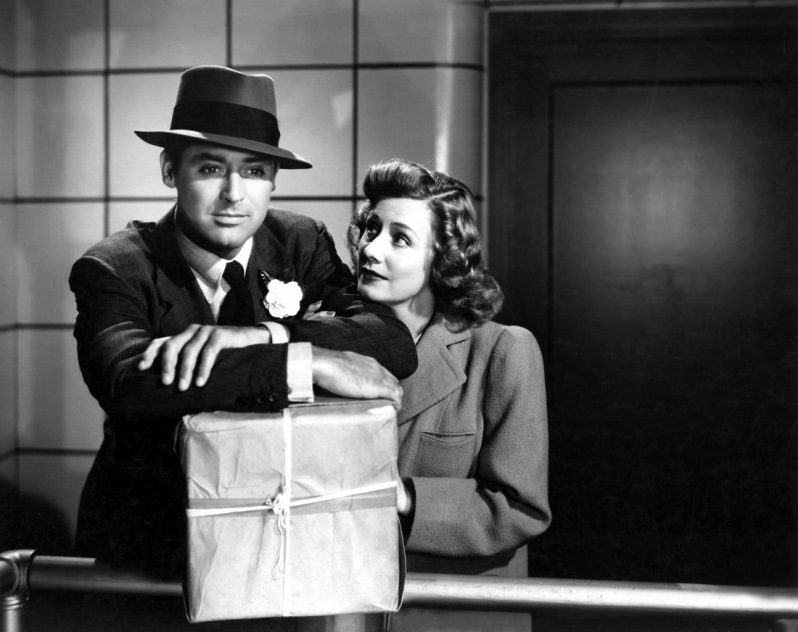 Character actor, Edgar Buchanan plays Applejack, Roger and Julie’s best friend, employee and surrogate everything. Buchanan is excellent in this movie as the gravelly voiced, dependable voice of reason. It’s Applejack who opens the movie by playing a song from a bound book titled, “The Story of a Happy Marriage.” As the signature song plays, a Johnny Johnston version of Nacio Herb Brown and Arthur Freed‘s, “You Were Meant for Me,” the memories surface. Right off the bat we know we are not witnessing a happy home as the weight of tragedy is evident on Julie’s face from the moment we see her, as she approaches Applejack before the memories become hers.

One of my favorite scenes in Penny Serenade, which is admittedly a well-used one in movies that depict new parents, is where we see Julie struggling to bathe her new baby. Applejack warms the heart when he steps in and shows the new mom how it’s done in charming fashion. The best part is when he puts talcum powder on Trina as if he’s seasoning a turkey even tossing a little over his shoulder for good luck.

As far as grown-ups go the final player of note is Beulah Bondi who plays Miss Oliver, the matron of the orphanage. The always reliable Bondi is true to form in an emotionally rewarding portrayal of a woman who is deeply affected by the lives she touches. 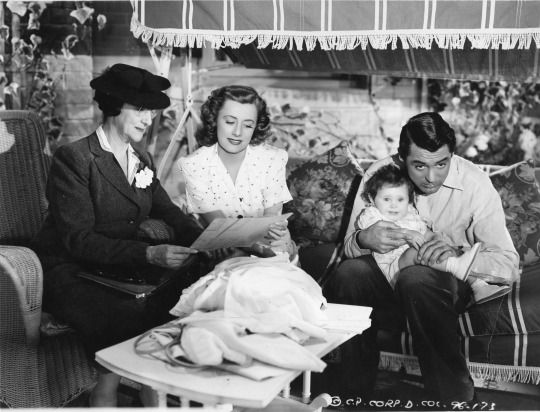 I should also mention the two little girls in Penny Serenade each steals your heart in her own way. Eva Lee Kuney plays Trina at six years of age. Once you see the sweet performance by this actress it’s surprising to learn this was her only credited role and that she only appeared in a few other movies in the 1940s. The school Christmas pageant and all of the scenes associated with it tug at your heart with not an ounce of subtlety. Trina is promised she will play an angel in the following year’s pageant, when she’s a big girl. Life makes that come true in a cruel way.

Trina as a baby is played by Jane Biffle, billed as “Baby Biffle” in her only movie role according to IMDB. There’s not much to say here except it’s easy to see how Roger and Julie fall in love with this little girl.

I am enveloped in the drama of Penny Serenade from the moment the first record spins. And yes, this movie is difficult to watch at times, but don’t fear the sadness you will feel because this is a story well-told and worth seeing. There’s the warmth of nostalgia the film evokes, which lingers throughout and warms the senses, certainly a feeling classics fans would appreciate. The records are used beautifully to evoke that nostalgia despite the 1941 New York Times reviewer calling it a cheap trick. They are reminders of all Julie and Roger have shared with each other – and with us. Can I tell you what the soundtrack of this movie did to my five-year-old self? It made me float on air. And I still buy into all of it – lock, stock and barrel. There is deep love portrayed here by highly sensitive actors and a tapestry of love woven by a sensitive director. What more would you want from a movie, but that it make you feel? I’m not a crier by nature, but if I cry I want it to be worth it and this one’s worth it.

Gather your tissues before you head on over to visit the “No, You’re Crying!” Blogathon, which runs from May 12 to 14 at Moon in Gemini.