About ten minutes into Clifford Sanforth’s Murder by Television (1935) I was completely lost so I rewound the DVD and started it again.  Approximately twelve minutes later I repeated the action.  This time, however, I let the movie play out and… this is what I know…

Prof. James Houghland (Charles Hill Mailes) has invented a much-coveted, revolutionary way to transmit TV signals anywhere in the world.  Don’t ask me for details, but Houghland’s invention entails twisty-turny bulbs and such that are so valuable that companies have offered him up to $5 million for it, but he refused them.  Well, while Prof. Houghland is demonstrating his revolutionary invention to those lucky enough to have TV sets and to a group of colleagues in his house he drops dead.  I’m guessing the “why” of his dead state are those companies who want to get rich on Houghland’s invention.  But I’m not saying a word!  It’s up to Police Chief Nelson (Henry Mowbray) to find the killer among those present at the demonstration.

Murder by Television makes for a great title for a Columbo episode, but as a far as a big-screen murder mystery it fails even it’s likely $5.50 budget at the Poverty Row studio, Cameo Pictures.  The tiny budget is evident every time the camera pans across the back of somebody’s head during conversations or the lack of staging in many of the scenes.  That said, there are some positives.

Murder by Television stars Bela Lugosi in one of the rare non-horror movies he appeared in although he’s definitely a suspicious character from the get-go.  Lugosi plays Dr. Arthur Perry, who works for a competing television company.  I might add that he is also quite handsome here, a fact one forgets if you watch too many of his Universal movies in succession.  Bela’s unmistakable accent and voice are definite draws here although – unfortunately – many of his sentences in the early part of the movie are rarely longer than one word.  Perhaps.  Yes.  Maybe.  No.  And… I just plagiarized half the script.  I don’t want to spoil the movie (assuming I could if I wanted to), but Lugosi has some important statements to make later in the story as he gets to the bottom of the mystery, a mystery far too sophisticated for the likes of regular policemen. 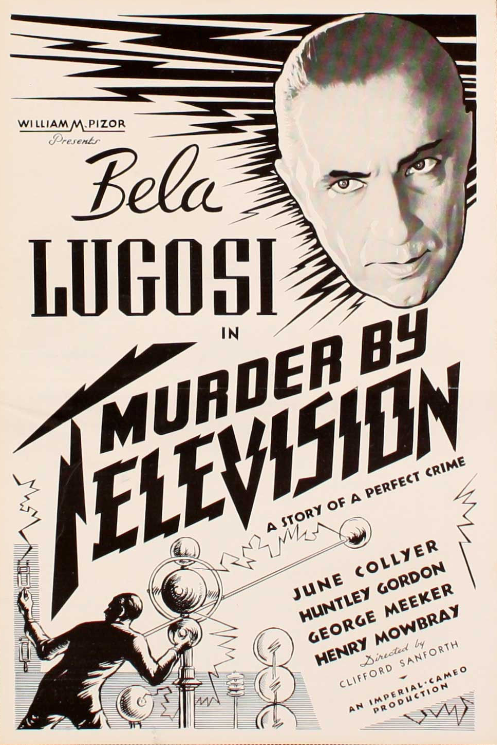 I’m not exaggerating when I said Murder by Television confused me, but in fairness the print I have is awful and noisy from one of those million movies for $8 sets.  Since the movie has been in the public domain for quite some time I imagine it’s been torn apart and put back together carelessly as it skips what may well be entire scenes.  I say it’s worth a watch regardless if only for Lugosi’s sake and the clever title sequences during which the main players appear in make-shift television screens.