As we all know Jack Benny was one of the most beloved entertainers in the world by the time he brought his talents to the small screen in 1950 with “The Jack Benny Show,” the television version of his popular radio show.  “The Jack Benny Show” ran until 1965, which gives a good indication of the show’s appeal with audiences. 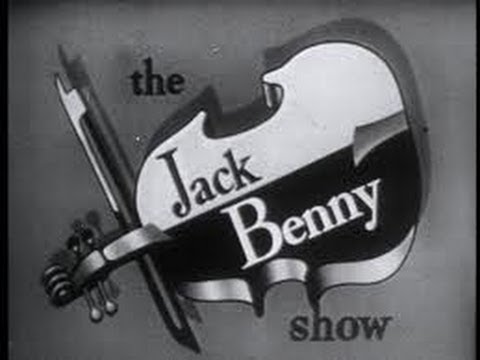 Of course Jack Benny wasn’t alone in making the transition from radio to television, but he was one of the most successful in doing so.  Still, it’s worth noting he moved into the new entertainment medium slowly with only four shows produced the first season (1950-1951) after the airing of what would turn out to be the show’s pilot in May 1949.  As years past the Benny show aired more frequently, but it wasn’t a weekly show until 1960.  During interim years the airings varied from every six weeks to every three alternating in its time slot with other popular programs.

Most of Jack Benny’s original radio cast appeared on television with him, including announcer Don Wilson, Eddie ‘Rochester’ Anderson as Jack’s wise-cracking assistant (who made his television debut on the show’s pilot the year before).  Singer Dennis Day was also a regular as was voice artist extraordinaire, Mel Blanc who played many different roles throughout the run of the program.  Jack Benny’s real-life wife, Mary Livingstone appeared occasionally.

Also featured on the majority of “The Jack Benny Show” episodes were some of the biggest stars of the silver screen who were written into sketches that incorporated the familiar Jack Benny persona into the storylines.  For those of you not familiar with that persona it was a conceited, cheap, perpetually 39-year-old version of Jack Benny.  Familiar and always funny.  Following is a recounting of one of the episodes, the one with guest star Humphrey Bogart in a send-up of a gangster scenario and it’s a hoot.

This particular episode of “The Jack Benny Program” follows the most frequently used set-up of the popular series, although Jack Benny was pretty flexible as far as formatting it seems to me.  The episode includes an opening dialogue by Benny, which often featured some banter with the show’s regulars, several “live” commercial breaks for the show’s sponsor, Lucky Strike cigarettes, and a skit featuring Benny, the regulars and the show’s special guest. What makes this 1953 episode special is that it was a major “get” with one of Hollywood’s biggest stars appearing in a long skit.  This episode is commonly referred to as “The Humphrey Bogart Show.”

Benny precedes the sketch and Bogart’s appearance by saying that the show’s sponsors told him he wasn’t making the integrated commercials an important enough part of the show.  In case you’re not aware, integrated commercials were the practice for most comedy/sketch shows at the time where characters would somehow find an opportunity to recommend the sponsor’s product.  Well, whether it’s true or not that Lucky Strike told Benny to integrate the product more I can’t say, but the fact that it happens results in some very funny moments in the Bogart sketch.

As the play opens we hear Lieutenant Benny in voiceover introducing us to the 24th precinct situated in the heart of New York’s theatrical district.  We then see the detective squad room where people from all walks of life come, “the flotsam and the jetsam, the hoi and also the polloi.”  The story begins as several detectives go about their business with a couple of good-for-nothing culprits brought in to pay for their crimes.  Lt. Benny is writing out his report on repeat offender Slim Finger Sarah when the door opens and a huge audience reaction erupts.  Also clapping hardily and giving a standing ovation are the other detectives in the squad room.  There, standing in the doorway is Babyface Bogart, vicious gunman and notorious killer.  Looks like Detectives Simmons and Ross have apprehended him.

Since he’s the boss, it’s now up to Lt. Benny to get a confession out of the life-long criminal as pertains to the murder of one Blinky Mason.  Babyface denies knowing anything about Mason’s murder despite Benny’s tough interrogation tactics.

During which tough guy Bogart struggles to keep it together with Jack’s usual, dead-pan stare out at the audience.

Perhaps the funniest part of the play, as Benny referred to the skits, is Bogie’s standard, classic tough-guy delivery of what are essentially Lucky Strike ads written into the story – what I imagine was not so small a happening for the sponsor.  Imagine the likes of mega-star Humphrey Bogart singing your jingle?
So as the interrogation concludes, Babyface Bogart pulls his gun on Benny and the other detectives in the squad room.

Lt. Benny: What are you gonna do?

Babyface: [aiming handgun at Benny] I’m gonna put a red eye between them two blue ones.

Lt. Benny: Where’d ya get the gun?

Babyface: You didn’t frisk me so good when I came in, did ya?

Lt. Benny: (shaking with hands up in the air) No. No, when I put my hand in your pocket, I found a dollar bill, and got so excited I didn’t look any further.

Then Lt. Benny toughens up telling Babyface Bogart he’s not so tough, “throw that gun away and I’ll show you the real coward.”  Bogart does just that, he tosses the gun aside and Benny runs out of the room.

Bogart joins Benny on stage after a standard Lucky Strike break during which the star plugs his new movie, John Huston’s Beat the Devil co-starring Jennifer Jones .  More accurately, we see Bogart talking to Benny but we don’t hear him.  We know what’s going on because Benny is still heard in voiceover as if still part of the play.  When we see Benny tell Bogart about his latest picture, the guest does a quick turn and walks off the stage without a word.

Aside from the fact that Humphrey Bogart’s appearance on “The Jack Benny Program” is great fun, it’s also a rarity to see Bogart on television as a part of a series.  Period.  The Benny show appearance was the first of just two he made in regularly scheduled series.  His second appearance was in a Producer’s Showcase presentation of “The Petrified Forest” in 1955 on which the star reprised his famous Duke Mantee role from Archie Mayo’s 1936 film of the same title.

The Bogart Show episode of The Jack Benny Program cast:

Note:  You may have noticed that I use both “Program” and “Show” throughout the post when referencing Jack Benny’s television series.  It turns out that it alternated between those two during show’s long run. Today it is most often listed as “Program,” so I chose the title card at the beginning of this post to show it was also a show.  And…I’m not even sure that makes sense so I’m outta here!