We all know 1939 stands gold among the golden as far as movie years go.  I don’t need to mention the obvious.  Instead, I’m recognizing a major movie ‘happening’ from that year that goes largely unnoticed and that is the first pairing of Basil Rathbone and Nigel Bruce as sleuth Sherlock Holmes and his dependable friend and assistant Dr. Watson, which came to be in Sidney Lanfield‘s The Hound of the Baskervilles released on the 31st of March, 1939. 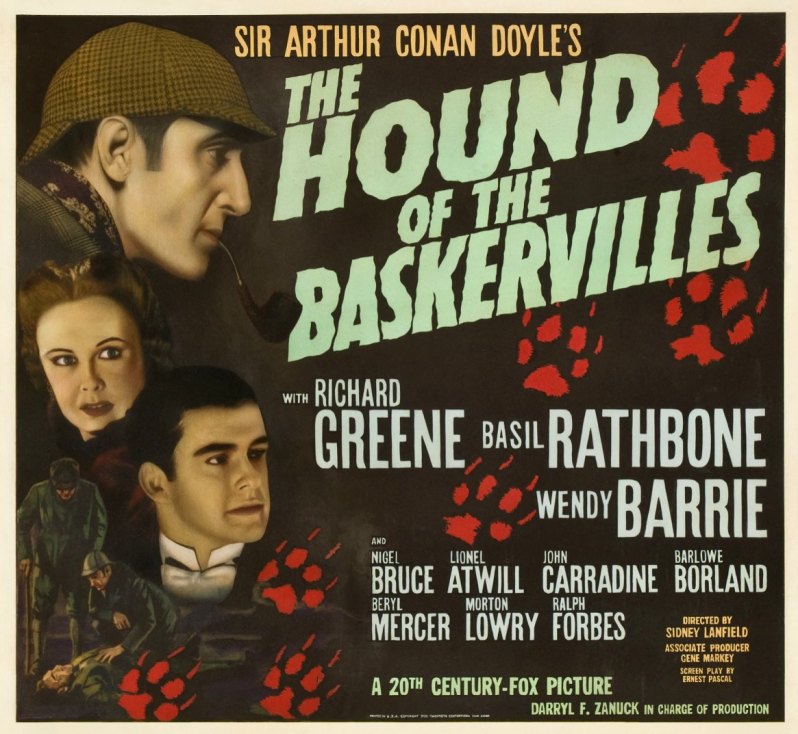 Of all the Sherlock Holmes film treatments I’m most familiar with the Rathbone-Bruce movie series, which total fourteen released from 1939 to 1946.  I’m also familiar with (and quite fond of) “The New Adventures of Sherlock Holmes” radio show that also starred Basil Rathbone and Nigel Bruce in 220 episodes, from October 2, 1939 to July 7, 1947.  Bruce continued on the radio show as Watson after Rathbone’s departure getting top billing opposite Tom Conway as Holmes, but the show lasted only 39 additional episodes.  In any case, the Rathbone-Bruce pairing is the essential Holmes-Watson combination for me even though some of the movies they made as the legendary pair are not top quality.  Together these two proved quite the effective team on two mediums out-maneuvering a vast array of murderers, conspirators, maniacs, foreign agents and Nazis.

When 20th Century Fox decided to do a movie featuring Sir Arthur Conan Doyle‘s famous sleuth they went with the third and most popular novel featuring Sherlock Holmes, “The Hound of the Baskervilles” and summoned Ernest Pascal to write the screenplay.  Although the studio struggled a bit settling on a director, a good if surprising choice was made in Sidney Lanfield who managed great pacing throughout.  Up to this point Lanfield had only directed musical comedies.  The real genius of Fox producer Darryl F. Zanuck, however, was casting Basil Rathbone as Sherlock Holmes.  As far as I’ve read Rathbone was the only person considered to play the legendary sleuth and it was an inspired choice.  Basil Rathbone could ham it up as good as anybody, which ensured a certain panache would be added to the words as Holmes describes each step of the investigation with a no-nonsense certainty.  Nothing this man says is throw-away material.  In addition Rathbone could play believable villains as he’d proved in Michael Curtiz’s The Adventures of Robin Hood (1938) always bringing a certain level of gravitas to the table.  The latter is true even in unlikely scenarios such as he did as Baron Wolf von Frankenstein in Roland V. Lee’s enjoyable Son of Frankenstein also released in 1939.  Add to all of that Basil Rathbone’s chiseled good looks and you have a most enjoyable, memorable Sherlock Holmes.  Actually more.  You have the definitive Sherlock Holmes. 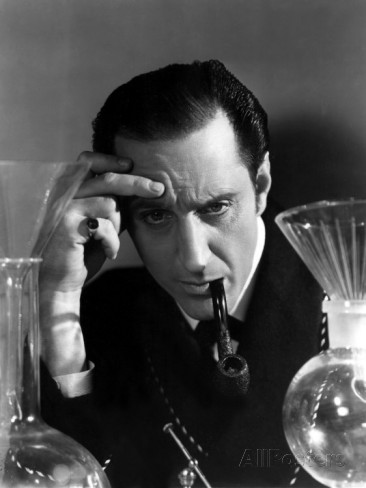 Soon after Basil Rathbone was cast he sent a telegram to his good friend Nigel Bruce asking him to return to Hollywood from Broadway where the latter had just concluded a disappointing stint on stage to play Watson to his Holmes.  Bruce agreed immediately, delighted at the prospect of working with his good friend.  The two had become friends as members of the legendary Hollywood Cricket Club started by C. Aubrey Smith in 1932, which boasted the likes of Cary Grant, Ronald Colman, Boris Karloff, Leslie Howard, David Niven and most notable Brits working in Hollywood as members.  In any case, Nigel Bruce was thrilled to play Dr. Watson and his enjoyment of the character is obvious on screen, adding oodles to our enjoyment of all of the Holmes tales in the movies and on radio.  Bruce makes for a fantastic comedic foil even in the instances where the character comes across as little more than a bumbling fool.  I find him a hoot at every turn.  Some of my favorite scenes in The Hound of the Baskervilles, in fact, feature Watson who often assists Holmes unknowingly.  Adding to this particular film’s attraction for me is the way Watson’s writing of letters to Sherlock Holmes while the Dr. is at the Baskerville estate are used as part of the narrative.  In this case Watson’s letters also serve to remind us (the audience) what questions we need to be asking as the mystery unfolds.  It’s quite effective.  Along with newspapers letter writing is an automatic thrill for me as a narrative tool used in classic movies.

Once both Basil Rathbone and Nigel Bruce were on board the folks at Fox insisted on an all British supporting cast to add to the story’s authenticity and the group does not disappoint.  These include Richard Greene as Sir. Henry Baskerville, Wendy Barrie as Beryl Stapleton and personal favorite Lionel Atwill as Dr. Mortimer.  Take a look at the complete cast and crew list here.

I’m thinking most people know the Baskerville story, but here’s the gist:

Entrusted to ensure the safety of Sir Henry Sherlock Holmes decides to send Dr. Watson to Devonshire along with the young Baskerville.  As Holmes explains he’s too busy to go to Baskerville Hall himself, but Watson keeps him appraised of the goings on via letters.  We soon learn, however, that Holmes was in Devonshire himself for some time snooping around without letting anyone know.  After several engaging scenes in the creepy, fog-filled moors, hearing the suspicious howling of a hound whenever danger lurks and spending time suspecting most of the characters Sherlock Holmes discovers the true murderer whose name I will not disclose.  In the end the great Sherlock Holmes matches up to his legend quite nicely and is praised in kind – as is this 1939 production, which is widely considered the best of the classic Holmes outings and with good reason.

The Hound of the Baskervilles has the aforementioned terrific cast, impressive production value, notable photography (by J. Peverell Marley), a compelling story and sets the stage in memorable fashion for the best Holmes-Watson pairing in media.  Aside from The Adventures of Sherlock Holmes, which follows Hound in the Holmes timeline and comes close to it in quality in my opinion, the rest of the movies never quite manage to match all of the elements in similar fashion.  It should be noted that 20th Century Fox lost the rights to the Arthur Conan Doyle stories after the first two movies.  The rights were picked up by Universal Studios in 1942, which accounts for the change in quality of the stories.  Universal’s budgets for these outings never matched Fox’s, which resulted in B-movies for the rest of the series.  I don’t have a problem at all with B-grade films from the golden era, but I’m not particularly fond of Universal’s decision to put Holmes and Watson in a contemporary setting, which was done to capitalize on the WWII media fervor.  While those movies are worth a watch and will no doubt entertain, missing is much of the appeal of the original period setting, which naturally matches Holmes’ sensibilities to a tee.

The Hound of the Baskervilles was an immediate hit with audiences and critics alike upon its release on March 31st, 1939 despite Fox’s obvious worries about billing as you can see from the poster (above).  Top billing was given to Richard Greene with Basil Rathbone noted second.  More surprisingly Wendy Barrie follows with Nigel Bruce listed after “and” in the second tier of credits.  The success of Hound, however, proved the studio worried for naught and a notable change was made for The Adventures of Sherlock Holmes released in September 1939.  As you can see from the following promotional poster the names of Rathbone and Bruce appear right below the title.  As it should be.  Here’s to one of the most enjoyable pairings in the movies.