UPDATE: Visit Athletes in Film Blogathon – Day 1 for links to the fabulous entries.

Today I consider myself the luckiest woman on the face of the Earth.  Well…OK.  Maybe that’s overselling this a bit, but I am thrilled to be co-hosting a blogging event with my friend and colleague Rich from Wide Screen World.  The event is the Athletes in Film Blogathon and we look forward to your participation.

The Athletes in Film Blogathon will focus on former athletes who became actors.  Examples are Charles Reisner, Johnny Weissmuller, Esther Williams and Sonja Henie.  You can also choose to write about films that feature athletes with obvious examples being Pat and Mike (1952), The Pride of the Yankees (1942), Here Comes Mr. Jordan (1941), and Raging Bull (1980) among others.  There are many movies and characters to choose from and we hope you get creative.  In hopes of getting a wide range of submissions we will not be accepting duplicate topic entries.  Also, films from all eras are OK by us! 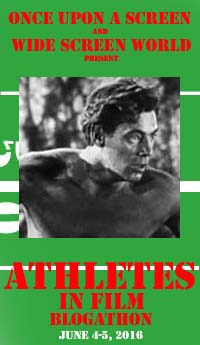 Scheduled for June 4th and 5th The Athletes in Film Blogathon hosts ask that you adhere to the following:
“How can a guy climb trees, say “Me, Tarzan, you, Jane”, and make a million? The public forgives my acting because they know I was an athlete. They know I wasn’t make-believe.” – Johnny Weissmuller on playing Tarzan in 12 films. 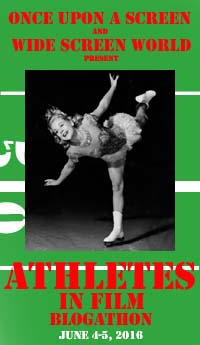 By the way, just because Rich came up with the topic idea and made the banners and invited me to co-host this event with him doesn’t mean I didn’t contribute to its planning.  I actually offered a title I thought would go over like hotcakes, but Rich disagreed.  The Athletic Supporter Blogathon.  Oh well. 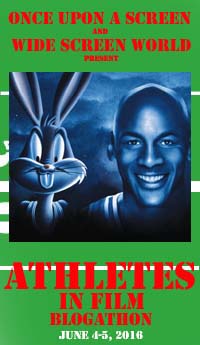 Cinematic Scribblings – The Loneliness of the Long Distance Runner (1962)

The Wonderful World of Cinema – A League of Their Own (1992)

Ramblings of a Cinephile – Somebody Up There Likes Me (1956)