I either didn’t know or forgot that Disney’s One Hundred and One Dalmatians celebrates a special anniversary today when I watched it during the snowgeddon this weekend.  I introduced Dalmatians to my neighbor’s kids on Saturday morning.  They loved it and I was reminded it’s one of my favorites, which is why I offer this humble, spoiler-filled tribute. 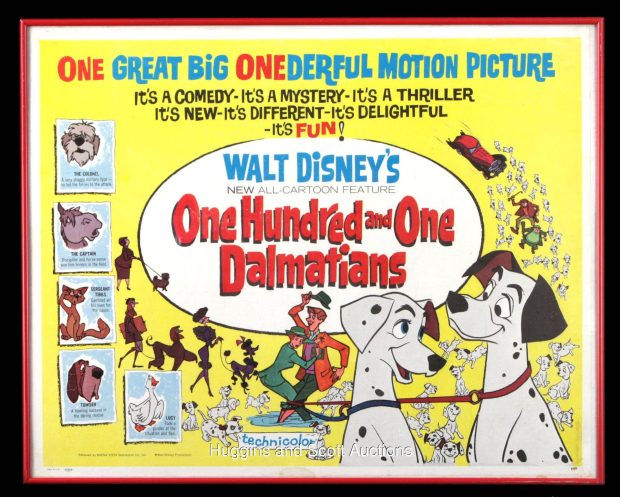 Songwriter Roger Radcliffe lives in a bachelor flat in London along with his dalmatian best pal Pongo.  Roger is dedicated to his work, quite satisfied to play his music for the rest of his life, but Pongo has other ideas.  Determined to find a distraction from his and Roger’s droll existence, Pongo sets out to find a woman for Roger and before long finds the perfect coupling.  Times two!  Looking out of their apartment window in case one of the passers-by happens to fit the bill, Pongo sees the lovely Anita walking her equally lovely dalmatian, Perdita.  Instantly Pongo sets out to run into them in the park dragging Roger along.  As a matchmaker Pongo is aces –  Roger and Anita hit it off and marry making a lovely home with Pongo and Perdita who also fall in love. 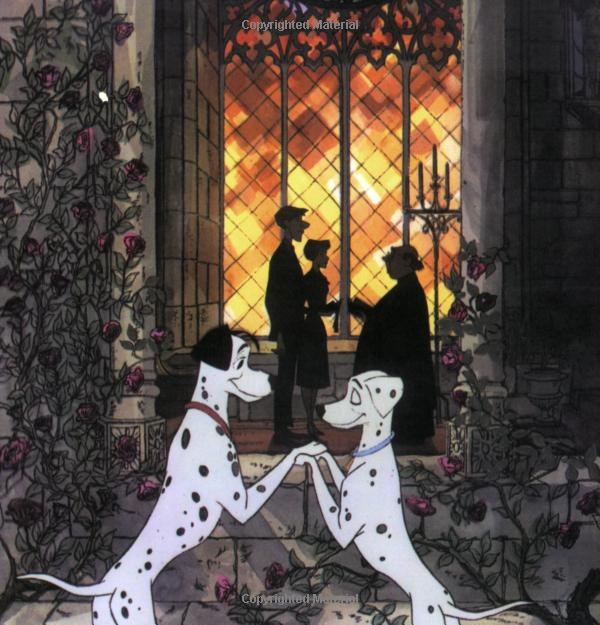 All is peaceful in the Radcliffe home.  Pongo and Perdita welcome 15 healthy puppies and everyone, including Nanny (the nanny) is beside themselves with excitement.  But the joy lasts only a few moments as Cruella De Vil, a wealthy, highfalutin heiress obsessed with fur who’s an old school friend of Anita’s, shows up offering to buy the puppies.  Needless to say Roger refuses her offer.  How Cruella and Anita ever became friends is a mystery to me. 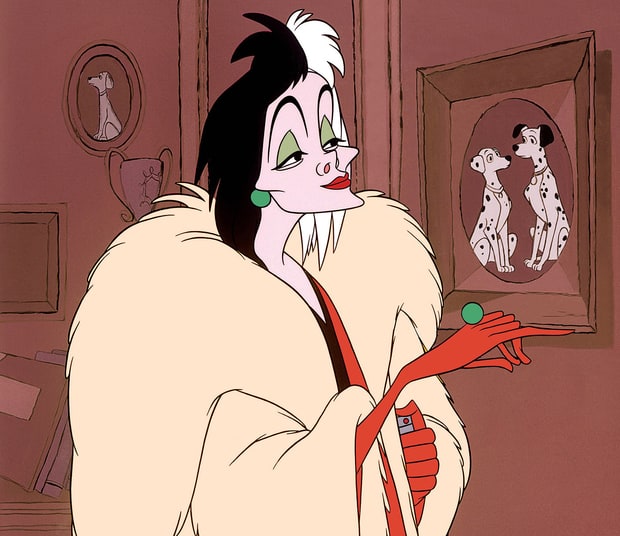 Cruella doesn’t take “no” well and is not quite through with the Radcliffes after storming out that fateful day.  Determined to get her paws on the dalmatian puppies Cruella sends her henchmen to steal them.  Everyone in the Radcliffe home is heartbroken, including Nanny who’s grown quite fond of Pongo, Perdita and the young ones.  Beside themselves with worry the Radcliffes contact the authorities, but the puppies are nowhere to be found.  Pongo and Perdita have no choice but to take matters into their own hands and send out an alert to the London society of dogs.  Well, that’s what I call it in any case – what they do is use an all-dog-alert barking system, which is like a canine gossip line, to recruit all the dogs of London to help find their puppies.  Dogs everywhere respond.  Soon the alerts reach remote areas where other types of animals join in the effort.

Long story short a sheep dog named Colonel, whose leading the force to find the puppies learns that  they’re hidden at Hell House, the abandoned estate of the De Vil family.  Time is of the essence, however, as the vile Cruella plans to make a dog skin coat out of the puppies.  Aide from the league of dogs and a host of other animals across the land on the alert, Pongo and Perdita also leave London in search of their babies braving the harsh winter elements until they find the Colonel and Hell House.  After struggles, close escapes and a terrific chase scene Pongo, Perdita, their 15 babies and another 84 puppies that Cruella had sinister plans for are able to escape.  That’s 15+84+Pongo+Perdita = 101 Dalmatians!!

With the help of animal friends the one hundred and one survive and make it back to Roger, Anita and Nanny who gleefully decide to get a “dalmatian plantation where the whole population can roam.” 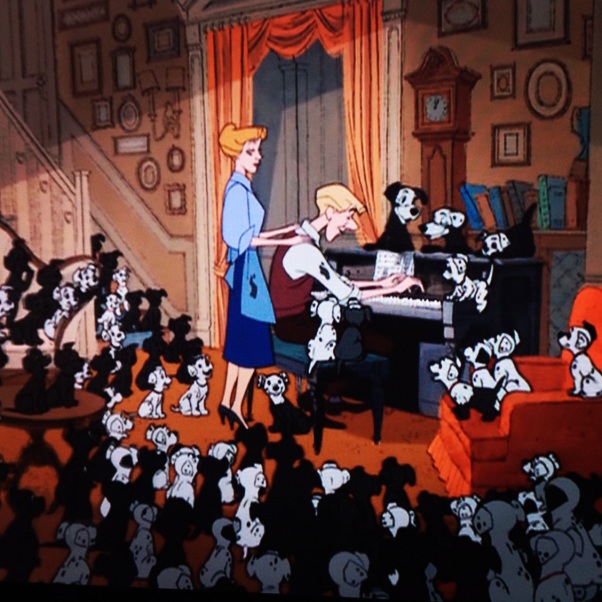 101 Dalmatians, Disney’s 17th animated feature has the classic Disney stamp, which includes a memorable cast of characters that remind us there is a lot more good in the world than there is evil.  This is a story that feels contemporary, has lots of heart, is suspenseful (the scene during which Pongo and family cover themselves with soot to escape De Vil’s grip is nerve-wracking!) and features – for my money – one of the most evil of villains in Cruella.  Marc Davis who drew Cruella later said working on this character was one of the most fun assignments he ever had at Disney.  Considering Mr. Davis was also responsible for Maleficent from Sleeping Beauty (1959) that’s quite the statement.  Cruella was also Mr. Davis’ last animation in a Disney film.  I you don’t think Cruella is that evil consider that next to kicking old ladies hurting puppies is the most unimaginable thing one can do.

101 Dalmatians is a landmark not only in the Disney animated cannon, but in the realm of animation history. For one it was the first Disney animated feature to be set in a contemporary setting, which probably accounts for why it stands among my favorites of the classic Disneys. Dalmatians was also the first feature created by a single story man, long-time Disney collaborator, Bill Peet who adapted the screenplay from the 1956 book by Dodie Smith.  I should note that writer-animator Peet who also played an important role in my all-time favorite classic Disney movie, Dumbo in 1941 (among many others) would have celebrated his 101st birthday later this month (on January 29th).

Directed by Wolfgang Reitherman, Hamilton S. Luske and Clyde Geronimo 101 Dalmatians features art direction and production design by Ken Anderson.  I love the animation in this movie so kudos to all of the talented animators who made the characters come alive.  From the perspective of this fan the animation here is both simple and complex emphasizing the emotion in the story against elaborate, but still, painted backgrounds, which are not usually what I go for.  But it all works quite well in this.  My favorite scenes in this are the two that feature televisions.  The first is when Pongo, Perdita and their 15 pups are watching a Western starring the great hero of movies, Thunderbolt the dog.  The warm and fuzzy scene is key in allowing the pups distinct personalities.  The other scene is when Cruella’s henchmen, Horace and Jasper, are watching “What’s My Crime?” at Hell House a take on “What’s My Line?”  It’s because the two hoods are so caught up in the show that the puppies are able to escape.

Apparently everyone in 1961 enjoyed 101 Dalmatians as much as I do – the movie was a huge critical and commercial success boasting the highest weekend debut that year and remaining the top box-office draw for six consecutive weeks. Adjusted for inflation Dalmatians is the 11th highest grossing movie of all time (pre-The Force Awakens if that makes a difference) and second highest grossing animated film, just behind Snow White and the Seven Dwarfs (1937). For fun check out this 1961 promotional TV spot, which no doubt helped the film’s success at the box office.

I leave you with a list of the main players as far as voices go and a hearty congratulations to all involved in 101 Dalmatians on its 55th anniversary.

I can’t wait to show this one to my great-niece.