“Don’t make excuses and Don’t talk about it. Do it.”

That quote by Melvyn Douglas exemplifies his style, a no-nonsense actor whose mere presence in any production made it better – be it on a stage, on the radio, in a motion picture or on television.

Douglas’ career spanned over six decades and for his efforts he became one of the few actors to win the acting triple crown – two Academy Awards, a Tony and an Emmy.  And now he gets a month-long tribute on Turner Classic Movies (TCM) as the network has chosen him its Star of the Month for September.

TCM’s month-long salute to Melvyn Douglas kicks off with one of his Oscar-winning performances in Hal Ashby’s BEING THERE from 1979, which also happens to be Ben Mankiewicz’s movie pick of the month.  As noted by Robert Osborne in the September “Now Playing” guide BEING THERE came during what was in essence a second career for Douglas during which he succeeded in garnering more serious roles as a character actor.  However, at the very least we classic film fans adore the earlier half of his career and hope others tune to watch Douglas (often) as a debonaire, romantic man about town.  Roles and movies that should not be discounted.  Douglas matched wits and delivery with the best in the business, the likes of Cary Grant, Myrna Loy, Greta Garbo and Joan Blondell.  That was no easy feat in an era when romantic comedies were no doubt funny and romantic, but also movies of substance.  The kind they just don’t make anymore.

TCM will feature Melvyn Douglas films every Wednesday in September and there are many unforgettable classics planned, including a bunch I’ve never seen so – yet again – my DVR will be overloaded.  Be sure to visit the TCM schedule for specific screening dates and times or catch the movies on the Watch TCM app. 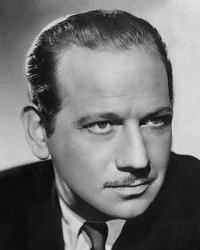 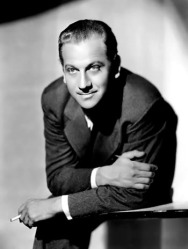 In the meantime – while you wait for TCM’s tribute to start you might consider enjoying some Melvyn Douglas by way of old-time radio.  Following are four entertaining productions in which Douglas appears alongside other greats of Hollywood’s golden era.  Enjoy!

From 1937 a Lux Radio Theater presentation of “Tonight or Never” starring Jeanette MacDonald and Melvyn Douglas.

From 1939 a presentation of Screen Guild Theater with Melvyn Douglas as the Master of Ceremony.  The episode guest stars are Joe E. Brown, Claudette Colbert, Edith Fellows, Phil Regan.