Week two was a campaign via Twitter whereby those interested had to RT and comment on their favorite John Wayne role.  From those that did as required the following name/tag was chosen at random:

The winner of the second copy of John Wayne: The Life and Legend is….. (drumroll)….

Week 1:  Starting with the publication of this post on March 17 through Friday, March 21 – leave a comment below stating which is your favorite John Wayne movie.

After conducting the tried and true picking a name out of a hat method, I’m happy to report that the winner of John Wayne: The Life and Legend is Michael aka @Le0pard13!

A reminder to everyone else that giveaways for additional copies will follow in the coming weeks.  The second week’s giveaway starts Monday via Twitter.  Thanks to everyone who participated!

Update: Since I released the original announcement for this giveaway, Simon and Schuster has published the official trailer for John Wayne: The Life and Legend.  It’s a great piece, which features Scott Eyman discussing how the biography of the screen legend came to be.  Take a look at it here.

Hot off the presses is acclaimed biographer, Scott Eyman‘s latest book, John Wayne: The Life and Legend, an expansive work that covers the life and career of one of the silver screen’s most admired figures.  I just finished reading it and couldn’t wait to share my thoughts.  But first I must extend a thank you to Stephen Bedford of Simon & Schuster for not only sending me a review 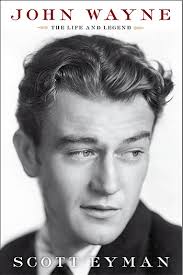 copy of the book, but for offering additional copies to give away on Once Upon a Screen.  More on that in a moment.

John Wayne: The Life and Legend tells the story of Duke Wayne from childhood through the stages of his career, which kicked into high gear (after eighty film appearances) with the ever-fascinating introduction shot in John Ford’s Stagecoach in 1939.  Eyman recounts Wayne’s life from his birth in Winterset, Iowa through his rise to stardom and on to the bigger-than-life image that still packs a punch today.  An image, I might add that was both carefully crafted and inevitable based on the many interviews Eyman was able to draw upon to tell this story, including an interview with John Wayne himself.

Most of John Wayne’s more notable films are discussed in The Life and Legend, with emphasis on the behind-the-scenes planning and players that influenced each step of creating the men that eventually formed the amalgam of the legend.  Expectedly, Eyman offers an in-depth look at Wayne’s relationship with John Ford and Howard Hawks, the two directors with whom he is most associated, as well as many of his famous co-stars and associates.  I can’t comment on whether the stories told in John Wayne: The Life and Legend are new, but they are new to me and I found many aspects of his life enthralling.  Like learning, for instance, about the woman – a screen legend in her own right – who had the biggest impact on Wayne’s career. And it’s not Maureen O’Hara.  Despite getting to know about Wayne’s relationship to those in the business, however, most interesting here (for this reader at least) are the stories that offer insight into a shrewd, yet vulnerable man – one of strength of character and deep-seated insecurities.  As I read about those qualities as they manifested throughout Wayne’s life and career

it occurred to me that those are also the qualities that my two favorite John Wayne film roles have – Sean Thornton in John Ford’s The Quiet Man (1952) and John T. Chance in Howard Hawks’ Rio Bravo (1959) – both discussed at length in John Wayne: The Life and Legend.

In any case, this latest book by Scott Eyman is a compelling read.  With little time at hand I could barely put it down.  I suspect I’ll be referring back to it often as a reference tool too.  It’s a fascinating journey one must take to become a legend.

And now for some exciting news –

You have four chances to win a copy of Scott Eyman’s John Wayne: The Life and Legend – one chance in each of the following four weeks. Here are the details:

Week 2:  From Monday, March 24 through Friday, March 28 – I will share this announcement on Twitter, @CitizenScreen and anyone interested will need to RT and in 140 characters or less comment on his/her favorite John Wayne role.

Week 4:  I will post an announcement on my Tumblr page, Citizen Screen on which anyone interested need only reblog the announcement and comment on which is his/her favorite John Wayne moment on film.

You can enter as many times as you like.  Each week’s winners will be chosen at random from all those that participate based on the details above.  I will announce each week’s winner on this post and share it on the other social media platforms mentioned above.  If the winner turns out to be you, please be sure to contact me within a couple of days of that announcement by sending me your mailing address via email to:  citizenscreenclassics@gmail.com  I will then forward that information to Stephen at Simon & Schuster so you can get your book as quickly as possible.

Note: This give-a-way is open to residents in the continental U.S. only.  My apologies to my Canadian friends or those who live in Hawaii, Alaska or other far away places.

Before I go – I’d be remiss not to let you know that John Wayne is the Star of the Month for April on Turner Classic Movies (TCM).  It’s no coincidence that the network should choose a man to whom “no one else could be compared,” according to Scott Eyman, as the Star of the Month during the month in which it celebrates its 20th anniversary.  And, don’t be surprised if Mr. Eyman makes an appearance or two to discuss Duke Wayne, his life and legend.  Be prepared and clear your DVRs now.

Thanks much for the visit and good luck!