Dick Powell was a huge success as a musical/comedy star in the 1930s.  But by the 1940s many considered him little more than an aging matinée idol, a perception he was sick of and intended on changing.

In the early 1940s RKO Radio Pictures was on the verge of bankruptcy and hoped to change the course of the studio by signing Dick Powell to star in a series of musicals of their own.   However, Dick Powell had other things in mind – like showing his darker side.  Taking advantage of RKO’s precarious situation, Powell put forth demands of his own – he’d agree to the terms of the contract if he be allowed to play a straight, dramatic role first.  Powell had been trying to get into “serious” roles for several years with attempts that included trying out for the male lead in Billy Wilder’s, Double Indemnity, which he was turned down for because Wilder thought audiences would never buy into Powell as the “hard-boiled type.”  RKO agreed to Powell’s demands, however, and much to the chagrin of director, Edward Dmytryck, cast him as private eye, Philip Marlowe in Farewell, My Lovely in 1944.  Farewell was based on the 1940 novel of the same name by Raymond Chandler.  Like Dmytryck, Raymond Chandler was not too keen on hoofer/singer, Powell playing his popular detective, but RKO forged forward with the film as planned.

Upon its initial release, Farewell, My Lovely didn’t even get a lukewarm reception from audiences.  Hoping the disappointment was due to the film’s title, which led people to believe it was yet another Dick Powell musical, RKO decided to change it to the darker, Murder, My Sweet and premiered the film in New York City with that title.

RKO’s “hunch” proved right as Murder, My Sweet became a hit.  The film renewed Dick Powell’s career, giving him a broader appeal as a tough guy.  Murder and Powell’s portrayal of Philip Marlowe also gave Raymond Chandler’s career a boost.  The author changed his personal views on Powell as Marlowe as soon as he saw the movie, expressing his approval of the portrayal – what was the first Philip Marlowe portrayal in a feature film.  Some think Powell’s portrayal of Marlowe is the most effective, by the way.  In his 1972 book, The Detective in Film, author William K. Everson suggests Powell’s Marlowe is more effective than Bogie’s from an audience perspective because “the realistic conception of the private eye was relatively new, and because Powell was totally new to it — became Marlowe far more easily than Bogart [in The Big Sleep (Warner Bros., 1946)], who had several other competing images working against him: the gangster image, Sam Spade, Rick from Casablanca. Powell tossed off the tired, contemptuous, yet biting Raymond Chandler wisecracks and insults with superbly underplayed style.”  I’m not sure I agree with even trying to compare the two because they’re such different takes on the character.  If pressed however, despite my love of Humphrey Bogart, I would have to choose not only Powell’s Marlowe, but Dmytryck’s film over Hawks’ in this case. (Phew! That actually hurt.)  Whether you agree or not, Everson’s is a compelling argument.

“‘Okay Marlowe,’ I said to myself. ‘You’re a tough guy. You’ve been sapped twice, choked, beaten silly with a gun, shot in the arm until you’re crazy as a couple of waltzing mice. Now let’s see you do something really tough – like putting your pants on.'” – Powell as Marlowe in Murder, My Sweet

Dick Powell found a niche playing anti-hero characters – usually likeable guys with a tough edge.  He was a natural at it, in fact, and would have essentially a “new” career thanks to his portrayal of Philip Marlowe in Murder, My Sweet.  So – that’s why as a tribute to the actor on the anniversary of his birth date, I am sharing a classic, radio version of the role and film that introduced Powell’s “darker side” to audiences in 1944 – a special Noirvember presentation.

From June 11, 1945, the Lux Radio Theater presentation of “Murder, My Sweet” with both Dick Powell and Claire Trevor reprising their film roles. (Click on the image to listen to radio broadcast) 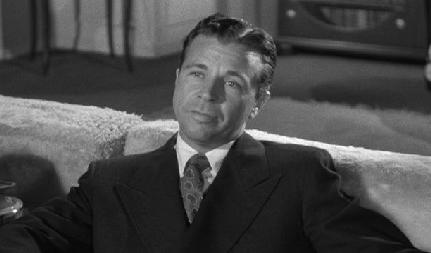