I knew I wanted to write about Jessie Royce Landis for the What a Character! blogathon when I found myself wishing Jessie Stevens—instead of her daughter Francie—would catch John Robie.  A great character actress makes the audience want to understand her character, know more about her background, why she makes the choices that she does.  Landis does this beautifully in her breakout role in Alfred Hitchcock’s, To Catch a Thief.

The flirtations fly from Landis’s Mrs. Stevens to Cary Grant’s Robie.  Yet, Mrs. Stevens pushes Francie, played by Grace Kelly, into Robie’s arms.  The way Landis plays Mrs. Stevens as intrigued, delighted, and attracted to Robie makes me wonder why she doesn’t try to catch him herself.  And yet at the same time, Landis shows Mrs. Stevens’ maternal presence as Francie’s mother and Robie’s potential mother-in-law. Landis manages to balance those roles—potential lover and maternal figure—without tarnishing either view of Mrs. Stevens.  It’s never gross.  Her banter with Robie, while flirtatious at times, never goes far enough to make us believe she would act on her attraction to Robie once Francie is interested in him.   Yet, that same banter along with her subtle smirks at Robie are what show a familial-like bond between the two.  It’s a delicate balance, but Landis pulls it off.  Hitchcock certainly knew what he was doing by casting her.  Although she hadn’t been acting on the screen that long, when To Catch a Thief was filmed, Landis already had decades of experience as a theatre actress.  She was far from a novice.

Born in Chicago, Illinois on November 25, 1896, Jessie Medbury made it to Broadway at the age of thirty.  Before coming to New York, Jessie acted at the Playhouse in Chicago in her twenties.  Shortly before she made her Broadway debut, Jessie married Perry Lester Landis.  It’s not exactly clear where the name Royce came from since Census documents list her middle initial as either J or T, but Jessie’s new husband’s last name became her own.  She used the name Jessie Royce Landis in her first Broadway role in The Honor of the Family (Dec. 1926 – Jan. 1927).  When she and Perry, after twelve years of marriage, divorced in 1935, Jessie kept the Landis name.  After all, from 1926 to 1935, Jessie starred in fifteen stage productions using that name.  She married again in 1937, but that marriage to Rex Smith ended after seven years.  In the meantime, Jessie continued to work on Broadway.  She performed in comedies and dramas.  She even did Shakespeare twice—first as Hermione in The Winter’s Tale, and then as Queen Elizabeth in Richard III.  Having acted in thirty-three Broadway productions by 1953, Jessie was already a successful stage actress, but, lucky for us, in the 1950s she became a success on the screen as well.

Between 1949-1950, Landis appeared in four films—Mr. Belvedere Goes to College, It Happens Every Spring, My Foolish Heart, and Mother Didn’t Tell Me.  She stayed off the screen for five years after making those films.  Then, in 1955, Landis appeared in Hitchcock’s To Catch a Thief.  Her layered portrayal of Mrs. Stevens led to her role in The Swan, in which she portrays Grace Kelly’s mother again.  Just as before, Landis’s character can’t help meddling in her daughter’s love life.

When asked by The Calgary Herald in 1956 what her secret was regarding memorization, Landis said she read her scripts out loud to memorize them.  She memorized the thought of the scene first.  She wanted to know what the writer was trying to say.  After getting the thought down, she memorized the dialogue as written.  Her method must’ve worked because Hitchcock adored her.  He cast her as a mother again in North by Northwest, but this time, as Cary Grant’s mother.  Even though Landis was only seven years Grant’s senior, she brings a mischievousness to her role that matches Grant’s ever present slyness as though it were a hereditary trait passed down by her to him.   It would’ve made more sense to cast her as Grant’s sister in the picture, but since mothers were a theme Hitchcock almost always wanted, a sister character in place of a mother just wouldn’t have worked for him.  To her credit, Landis sells it.  She never stops looking at Grant like a mother listening to her child tell someone else an elaborate, fantastic lie about an event which the parent witnessed and knows amounted to nothing.  The romantic chemistry that peeks through at times in To Catch a Thief is gone.  Instead, there’s only the familial.   Her appearance in the film is brief but rich.  And, as usual, she gets some of the best lines—“You gentlemen aren’t really trying to kill my son, are you?”

In 1956, Landis married Maj. Gen. J.F.R. Seitz.  They remained married until her death.  In all, Landis appeared in ten films after her success in To Catch a Thief.  The last film she appeared in was Airport.  Landis passed away in February of 1972.  She is buried in Danbury, Connecticut. 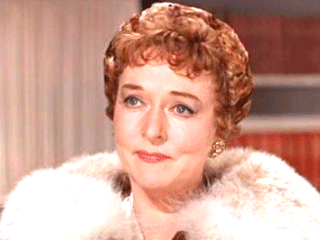 Ernest Lehman, who wrote the screenplay for North by Northwest, said that Landis was “wonderfully amusing with little gestures,” and he’s right.  It’s Landis’s subtle looks and movements that seem ingrained in her as though she really is the person she’s playing.  I love Cary Grant, but when I exam the two of them side by side, I see Cary Grant doing that amazing stuff that Cary Grant does, and then I see Clara Thornhill.  Not Jessie Royce Landis.  I see the character.  That’s the beautiful thing about a talented character actress.  It’s not something that most mega-movie stars can do.  Jessie Medbury can make us forget who she is, and that’s a character worth celebrating.

This post is part of the WHAT A CHARACTER! blogathon hosted by Outspoken & Freckled, Paula’s Cinema Club and Once Upon a Screen.  Thanks for reading and a special thank you to Aurora for hosting this post on her fabulous blog.