In tribute to Marilyn…

“I don’t want to make money, I just want to be wonderful.”

Many extraordinary talents came and went in the 20th Century, only a handful of which are considered true icons.  The ones whose image alone inspires a deeply-felt response from people.  To me, there is no greater icon than Marilyn Monroe.  She was not the best entertainer nor was she the best actress, but whatever it is that makes an icon, she had it in spades.  The camera loved her.  Her legion of fans adore her and honor her like no other is honored.  I never knew that to be an absolute truth until I joined twitter where her many fans are on a constant quest to share her stories, her work, her image.  They are true keepers of her flame. Marilyn Monroe died on August 5, 1962.  That makes this the 50th Anniversary of that sad day.  Hers was a tragic ending to a beloved life, a woman whose “magic” has only grown over time.  There is nothing new I could possibly say about her, even if I felt so inclined.  There is no image I can post here that hasn’t been ogled over, admired and discussed to the last detail.  Yet, I do want to pay tribute to a memorable figure in film.  One whose work I enjoy.   To me her greatest talent was that of comedienne, a talent for which I don’t think she is given due credit.  You’ll see from the clips I include below which of her film roles I enjoy most.  All are funny and endlessly entertaining. Following is a career retrospective in images – stills and video – many familiar to most, but if one thing is certain is we never tire of looking at Marilyn.  Most of her feature films are represented as well as a few other highlights.  A look back at Marilyn, the talent and star, as they rose.

“A career is wonderful, but you can’t curl up with it on a cold night.”

1947 – in Arthur Pierson’s, The Dangerous Years – as Evie the waitress – her first, credited role.

1949  – in David Miller’s,  Love Happy – as Grunion’s client with the one, the only, Groucho http://www.youtube.com/watch?v=P7eUJZlYXh8 1950 – in John Huston’s, The Asphalt Jungle – as Angela Phinlay (her breakthrough role)

1950 – in Joseph L. Mankiewicz’, All About Eve – as Miss Casswell (with Bette Davis and George Sanders) 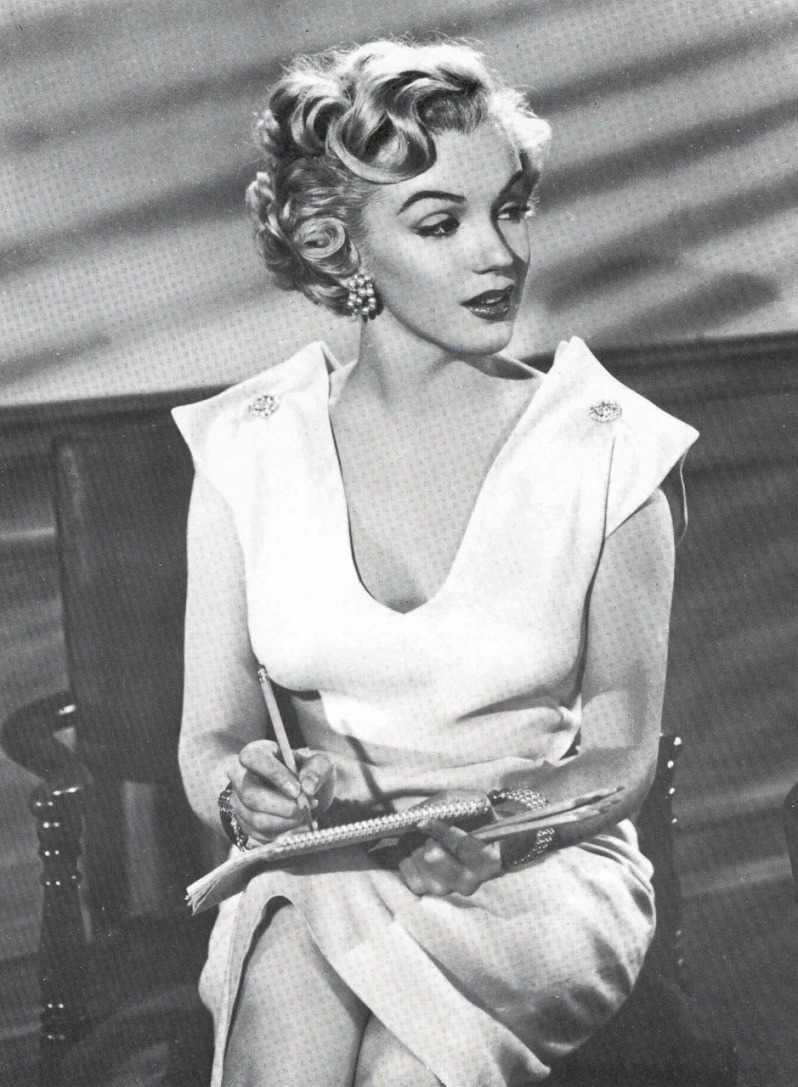 Selling products as the star of Love Nest…

1952 – in Howard Hawks’, Monkey Business – as Miss Lois Laurel (with a certain Mr. Grant) “I have something I wanna show you” http://www.youtube.com/watch?v=QBMZu-NzaT0 1953 – in Henry Hathaway’s, Niagara – as Rose Loomis 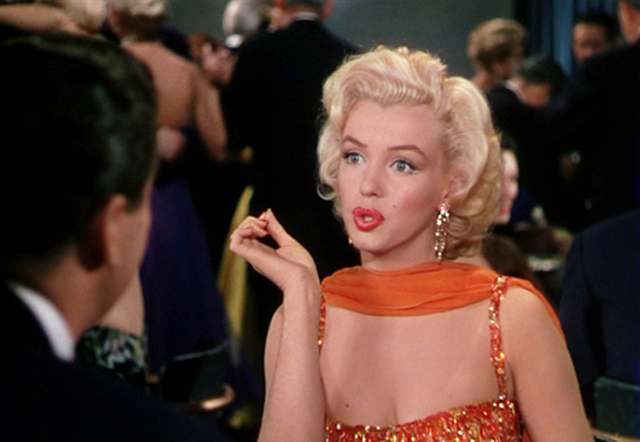 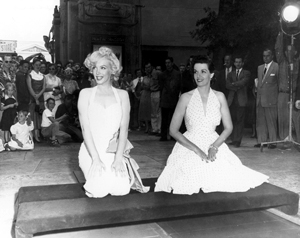 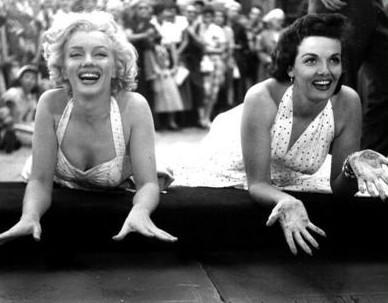 1953 – in Jean Negulesco’s, How to Marry a Millionaire – as Pola Debevoise (with Betty Grable and Lauren Bacall) 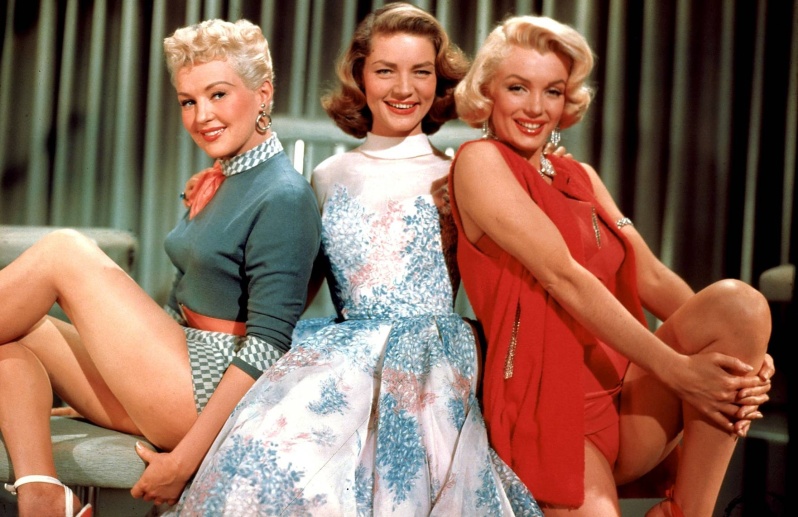 1953 – as the guest star on “The Jack Benny Show” – her first, official television appearance (full episode) http://youtu.be/3g8RcphOUUU 1954 – in Walter Lang’s, There’s No Business Like Show Business – as Vicky Parker (with Donald O’Connor) 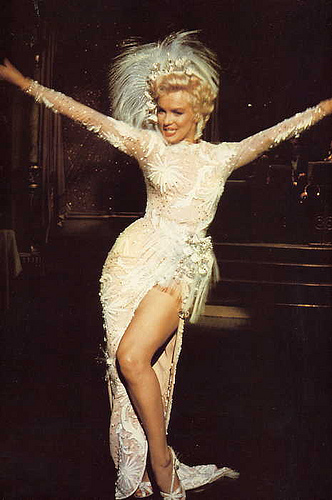 1955 – in Billy Wilder’s, The Seven Year Itch – as The Girl (with Tom Ewell and in one of the most iconic images in film history)

Marilyn stopped to speak with the press when she returned to Hollywood after a break to film Bus Stop.  Also included is brief footage about her new deal with Warner Brothers on The Sleeping Prince, which went on to become The Prince and the Showgirl. http://www.youtube.com/watch?v=Y5s4M5Kx6yI&feature=related And in 1955 appeared on “Person to Person” with Edward R. Murrow: http://youtu.be/L05TYBXwU3A 1956 – in Joshua Logan’s, Bus Stop – as Cheri

1959 – in Billy Wilder’s, Some Like it Hot – as Sugar Kane Kowalczyk (with Jack Lemmon and Tony Curtis) 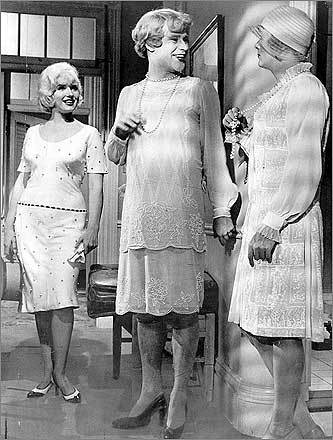 Here she is trying to get Tony Curtis’ glasses to fog up while he does his best Cary Grant.  So great! (the unforgettable Tango scene between Jack Lemmon and Joe E. Brown is included here too.) http://www.youtube.com/watch?v=beAO7zrZL3A 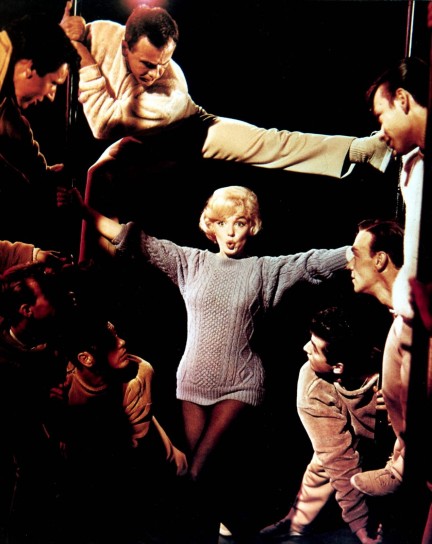 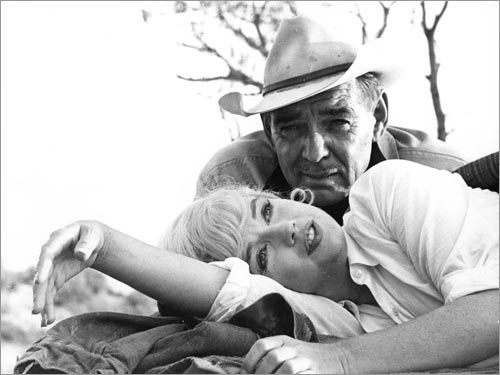 Marilyn made her last public appearance on this historical birthday celebration on May 19, 1962 in honor of then-President John F. Kennedy, which took place in New York City’s historic, Madison Square Garden.  When worlds and elements collide history is made.  The dress, the occasion, the place, the woman, the honored guest and both their eventual tragic ending have ensured this remains in the public consciousness.  Terribly sad and yet fascinating. Introduced by the President’s brother-in-law, Peter Lawford as “The late Marilyn Monroe”… http://www.youtube.com/watch?v=EqolSvoWNck

“Hollywood is a place where they’ll pay you a thousand dollars for a kiss and fifty cents for your soul.”

Dana Andrews and Peggy Cummins in NIGHT OF THE DEMON (1957)
George Arliss in character as a Millionaire in A SUCCESSFUL CALAMITY (1932)
Loading Comments...
%d bloggers like this: