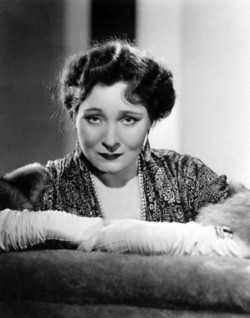 It has often been said that George Martin (the famous record producer, who produced nearly every single record the Beatles recorded) was the “fifth Beatle”.  What, pray tell, has this to do with Margaret Dumont? Just the same way George Martin was labeled an unofficial member of The Beatles, Margaret Dumont is considered by some fans and classic movie experts to be the fifth Marx Brother, including no less an expert than Groucho Marx.  High praise indeed from Groucho.
Most people remember Margaret Dumont as either Mrs. Rittenhouse, Mrs. Teasdale, or Mrs. Upjohn, or any of the other ladies who were the targets (literally in the case of Duck Soup) of The Marx Brothers’ humor.  She quite often represented the stuffy,  upper-class, high-society woman who the boys enjoyed taking down a peg or two.  Or, she played the dowager who was a patron of the arts or high society events.  For me, however, she was more than a target of the boys; she was a critical element of all the films and they could not have been as successful without her presence.
Ms. Dumont began her career long before she was cast in The Cocoanuts-the first play that she acted in with Groucho, Chico, Harpo and Zeppo. In fact, Ms. Dumont began her career as an opera singer and her theatre debut was in Beauty and The Beast in August of 1902.  Probably what made her so successful in her portrayals of widows and upper-crust society is that in her real life she was a wealthy woman who inherited a great deal of wealth from her sugar-magnate husband, John Moller, Jr.  After the marriage she retired from the theatre even though she did appear in A Tale of Two Cities in 1917.  However, after her husband died in 1918, she apparently was reluctant to return to stage work but did so, and began to make a name for herself and develop a reputation for herself as an effective actress in musical comedies such as The Fan in 1921.  George S. Kaufman is credited with recruiting Ms. Dumont for The Cocoanuts (the play), and from there the second act in her career began to blossom.
In my view, The Marx Brothers (and more specifically, Groucho) and Margaret Dumont were a perfect comedy team.  They complemented each other; the old cliché about opposite personalities make for great comedy certainly applies in this case as well as others (Martin & Lewis, Laurel & Hardy, etc.).  But Margaret Dumont’s characters were also the perfect foil for Groucho and his schemes to fleece her.

But she was more than just a rich widow who moved through high society, both in the movies and in life.  In my opinion, she is the greatest straight man (or straight woman) and good sport in the history of the movies. To wit the following exchange in Duck Soup:
Groucho: ….would you mind giving me a lock of your hair?
Dumont:  A lock of my hair?  Why, I had no idea…
Groucho: I’m letting you off easy.  I was gonna ask for the whole wig!
Who else good take such verbal and physical abuse at the hands of four maniacs, and then keep coming back for more year after year?  (Incidentally, I have to wonder if the above dialogue was an in-joke because Margaret Dumont apparently did wear wigs on and off screen).
I don’t think anyone else could have survived physically or mentally.  Maybe, that is why she later quipped that she would not give a million dollars for the experience, but she would not give a dime to relive the entire experience.  However, this is not doing justice to Ms. Dumont and her acting skills.  For example, pay attention to her mannerisms and her facial expressions.  They are timeless.
Ms. Dumont has a way with expressions-whether that be exasperation or consternation at the antics of the boys.  Often, she had a confused expression on her face, and some including Groucho, suggested that she never understood any of the jokes.  I disagree.  I think this was just an understated reaction to the madness going on around her.  Ms. Dumont came from a tradition in acting that often emphasized holding back one’s own reactions and feelings in order to get the right shot or reaction if the actor was on stage.  She also once said that being the straight man meant that one never upstaged the star or the joker.  Only she could have accomplished this with such aplomb. Their chemistry was successful and unique, indeed.
Groucho and Margaret’s roles as the romancer and the object of affection, respectively, was maybe too successful because Groucho remarked in later years that people often thought that they were married in real life.  When actors can make people think that one has a relationship off-screen and on-screen, then that is truly the mark of great chemistry and acting.  One picture truly encapsulates and embodies Margaret Dumont’s work with The Marx Brothers, and especially Groucho.  It is the fairly famous picture of Groucho and Margaret Dumont drinking out of the same Coke bottle with two straws while eyeing each other.  I think that picture sums up the relationship for the two characters they portrayed but also the relationship between Groucho and Margaret-two partners who enjoy each other’s company and need one another.

In my opinion, Groucho (and by extension The Marx Brothers) needed Margaret Dumont and valued her contributions.  Let me give you two examples.  In 1965, Groucho and Margaret reunited to recreate  a scene from Animal Crackers for The Hollywood Palace.  Of all the people Groucho could have chosen to work with for that recreation, he worked with Margaret Dumont.  Later on, he would comment that he was so happy that Margaret Dumont’s last performance was with him.  Sadly, she died shortly after The Hollywood Palace performance.  Another example of the importance of Margaret Dumont to The Marx Brothers was at an Academy Awards ceremony.  In 1973, Groucho was presented with an honorary Oscar, and in his acceptance speech he mentioned  Margaret Dumont.  He did not mention his brother, Zeppo, for whatever reason, but he did mention Margaret Dumont.  Once again high praise for a woman who had an extensive career on stage and screen and worked with other comedians of the time.  Another example of the closeness and special place that Margaret Dumont occupied in the life of Groucho was how she addressed Groucho.  She referred to him as “Julie” (short for Julius, Groucho’s real name).  I do not think just anyone would have been allowed that privilege.
Even though Margaret Dumont starred in other comedic films such as 1941’s Never Give A Sucker an Even Break and Laurel and Hardy’s The Dancing Masters in 1943, Margaret Dumont will probably always be remembered as: Mrs. Potter, Mrs. Rittenhouse, Mrs. Teasdale, Mrs. Calypool, Mrs. Upjohn, Mrs. Dukesbury, and Mrs. Phelps.  Margaret Dumont: WHAT A CHARACTER!