My absolute favorite horror movies are those produced by Universal Pictures during the studio’s horror hey day.  Today I am dedicating a post to a prime example of the era, one that stands among my favorites from the Universal entries that tell the continuing saga of Frankenstein and his monster – Rowland Lee’s Son of Frankenstein (1939) starring Basil Rathbone, Boris Karloff and Bela Lugosi. 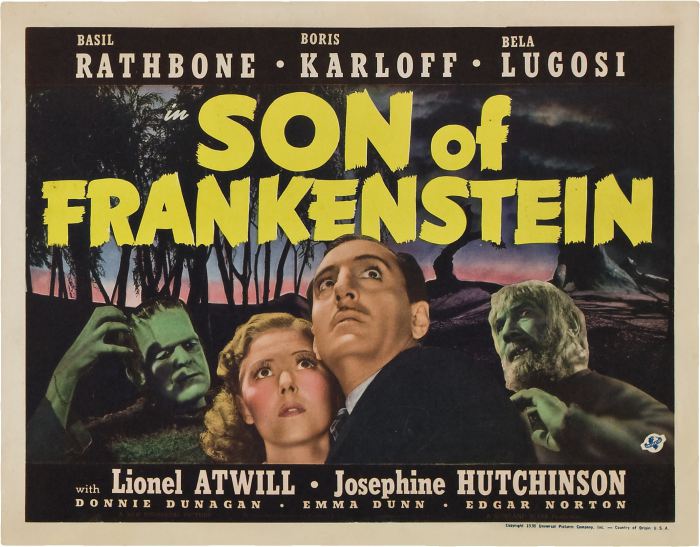 In the Universal Frankenstein timeline Son of Frankenstein follows and is a sequel to James Whale’s masterful The Bride of Frankenstein (1935) and proves to be a worthy successor.  That is despite the inconsistency following what we thought was the final destruction of The Monster in Bride.  If you happen to enjoy Universal horror movies, however, inconsistencies are part of the charm and if you watch all of those Universal entries from the 1940s you’ll note The Monster is hard to kill.  That said if you care about monster spoilers don’t read on!

When The Bride of Frankenstein ends we see The Monster rejected by his Bride, the new creation of Dr. Henry Frankenstein (Colin Clive) and the exuberant Dr. Pretorius (Ernest Thesiger).  Hurt and angry The Monster declares “we belong dead” referring to himself, his estranged bride and Pretorius and proceeds to pull the lever, which results in the explosion of the castle and laboratory and – one would think – of all creations within the structure’s brick walls.  That’s not the case, however, as we see in Son of Frankenstein, which story goes something like this…

Baron Wolf von Frankenstein (Rathbone) has a last name synonymous with horror, a name he is determined to restore to glory.  The Baron and his family – wife Elsa (Josephine Hutchinson) and young son, Peter (Donnie Dunagan) – are not welcomed by law enforcement and townspeople who look upon him with fear and disgust when the family arrives in the castle where Henry had performed experiments that terrorized.  It’s been decades since Henry had succeeded in revitalizing dead tissue, but the terror still permeates the village.  Wolf feels his father’s reputation is unwarranted, however, as the murders and mayhem caused by his father’s creation resulted from the bungling of Henry’s assistant who’d brought him the brain of a killer.

Not making matters easier for Wolf von Frankenstein is the fact that although decades have passed since his father’s Monster terrorized locals six unsolved murders have been committed.  It’s widely believed that The Monster was destroyed, but superstitions abound as to murdering ghosts and other such things and few doubt that a Frankenstein must be to blame.  In truth the evil that permeates the village is made of flesh and blood and the young Dr. Frankenstein is unaware of its presence. 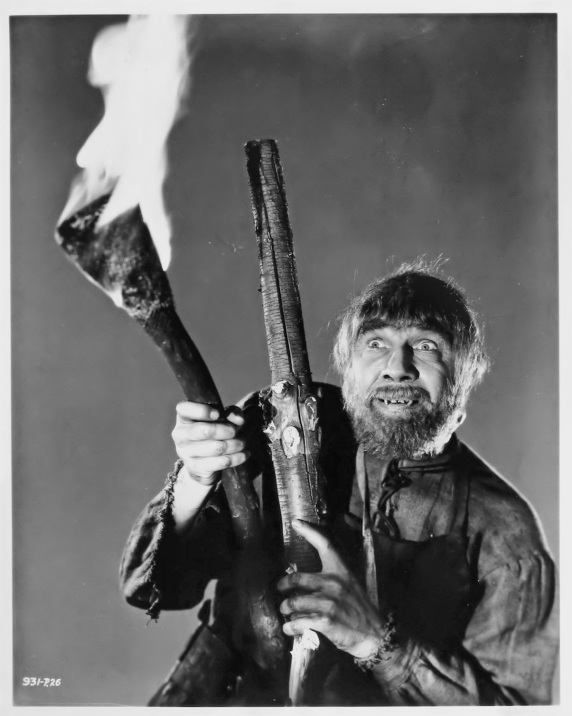 Lurking in the shadows and dungeons of Frankenstein’s castle is Ygor (Lugosi) who is presumed dead as he’d already been sentenced to death and hanged.  Unfortunately for the villagers Ygor’s hanging was unsuccessful serving only to break his neck and leave him disfigured.  It is Ygor who’s responsible for the mysterious murders and it is Ygor who’s happy to have a new Frankenstein in the house.  Wasting little time to put his master plan in motion Ygor lures Wolf into the belly of the castle where the crypts of his father and grandfather lie next to the immobile body of The Monster.  We learn, as Wolf does, that The Monster had not been destroyed at the end of Bride as we were led to believe – Ygor saved him.

Well, it doesn’t take much convincing from Ygor for Wolf von Frankenstein to be enthralled by the prospect of doing good by his father’s creation and vindicating his name.  Wolf begins work to revive The Monster all the while encouraged by Ygor who has a vested interest in his friend being brought back to life.

Meanwhile – Ygor, who the townspeople now know is alive and kicking, is called before a tribunal as he’s suspected of the six mysterious murders.  And who can blame them?  It turns out that the six dead are members of the jury who’d sentenced Ygor to death by hanging.

When Wolf von Frankenstein discovers Ygor’s actions, which involve getting The Monster to murder on his behalf the Dr. confronts the deformed man and eventually shoots him dead (except Ygor is alive again – thank goodness – in The Ghost of Frankenstein, the sequel to this movie).  In any case, at this point Ygor is dead and when The Monster finds his friend’s body realizing he’s been killed he takes Wolf’s son Peter in revenge.  After a mighty (and entertaining) final confrontation Wolf is able to knock The Monster into a pit of molten sulfur killing the creation once and for all (by Universal monster continuity standards) and saving his son.

Boris Karloff portrays The Monster for the third and last time in Son of Frankenstein and gives his most famous character a fantastic farewell with another affecting performance.  Especially welcomed in this entry is The Monster’s silence as the role is reverted to a (primarily) non-speaking part as it should have always been.  If I were forced to find a weakness in The Bride of Frankenstein it is the fact that The Monster speaks, which diminishes Karloff’s performance.  The actor himself was displeased with the dialogue The Monster was given in Bride, which often comes off as comical in contrast to the otherwise superb gothic horror story depicted in the film.  Well, not counting Una O’Connor or Thesiger.

Worthy of note is that Boris Karloff is once again under the guise created by Jack Pierce in Son of Frankenstein and the results are wonderful.  Pierce’s attention to detail following the look of the weathered monster in The Bride of Frankenstein pay tribute to the continuity often lost in the overall story.  If you care about such things in any case.

You might want to take a look at this short video compilation of behind-the-scenes shots of Karloff and Pierce from color tests of the make-up and wardrobe for this movie. 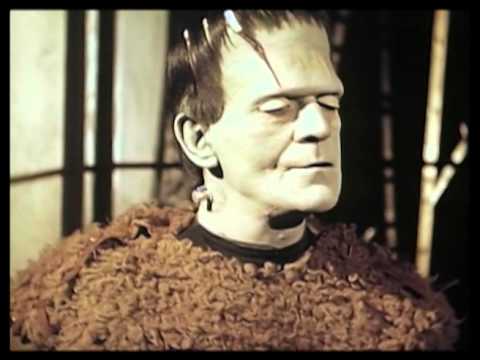 There are many memorable scenes in Son of Frankenstein, but I’ll mention two that stand out for me.  The first is the scene of the first encounter between Wolf von Frankenstein and his reanimated creation.  Wolf stands in his laboratory, facing us in a close up with his head down while busy with a task.  Ever so slowly we see the shadow of a figure rise up over the doctor’s shoulder.  (I couldn’t find a picture of the shadow to post here, but it’s a scene that never fails to send chills up and down my spine.) As The Monster’s face becomes clear to us, the doctor raises his head, aware of the force that approaches from behind.  The Monster raises his arm and puts a hand on the shoulder of the one who brought him back to life.  It’s an introduction worthy of the one, true Monster and for my money as effective as The Monster’s original introduction in Frankenstein (1931).  By the way this scene is tremendously enhanced by Rathbone’s reaction.  Karloff’s Monster aside, I could hardly take my eyes off Wolf von Frankenstein.  He is stunning. 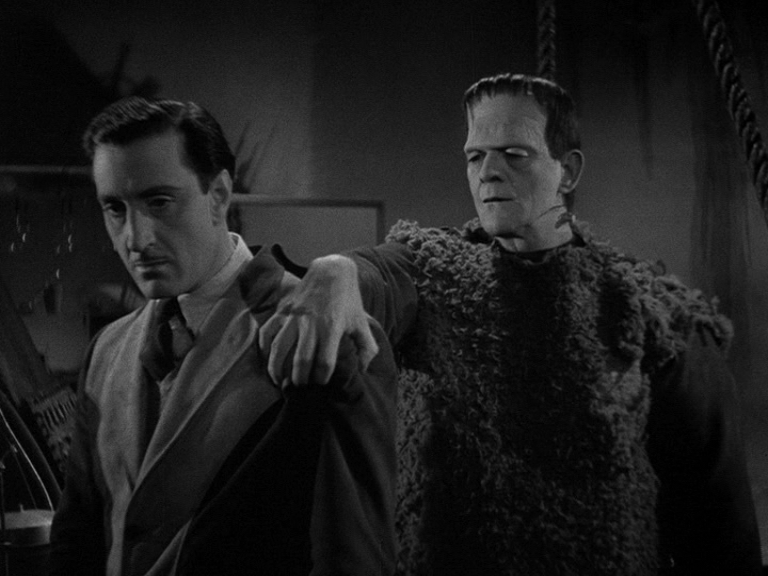 The other scene I am moved by follows the one I just described.  While in the laboratory, The Monster happens across a mirror and sees his own reflection for the first time.  He takes the time to fully comprehend the demon that stares back at him by moving his arms.  When the realization hits that he is, in fact, looking at himself – a monster – he asks, “Why” in a way that breaks my heart – utter agony made clear with one word.  This is an instant when The Monster speaks in this movie, but it is worth the word.  The Monster didn’t ask to be brought upon this Earth or to be made to suffer, to make others suffer and it is a fate too horrible to bear.  Beautifully done.  Also, it should be noted that this is not the first time The Monster has seen his own reflection and has reacted with similar abhorrence of his own countenance, but man he’s revived yet again and they never make the poor guy look prettier.  I mean, I like him the way he is, but clearly he’d like to not make people scream when they see him.  OK, moving on…

Although I mention two scenes featuring Karloff as favorites, mostly because I have a monster soft spot for The Monster, the overall performance winner in Son of Frankenstein is Bela Lugosi who’s fantastic.  Ygor is mischievous, creepy, funny and all that make a character memorable.  Lugosi made Son of Frankenstein after a string of (mostly) forgettable movies, but shines brightly as the mastermind behind the evil in this one.  In fact Ygor may well be the legendary actor’s best performance and the ultimate highlight in a most entertaining film.  I’ll go one further – Lugosi’s Ygor should stand alongside the other Universal monsters of repute.  After all, Ygor is as recognizable a horror name as any other and an important part of the Frankenstein lore.  Bela deserves the credit for this. 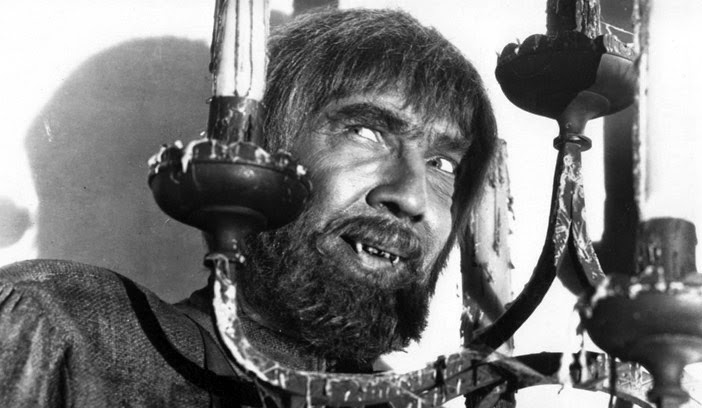 As far as the rest of the cast goes all players are good with Rathbone being a special treat for this fan who happens to think he’s a particularly good Dr. Frankenstein.  I must also mention Lionel Atwill who plays Inspector Krogh who hounds Frankenstein from the moment he arrives in the village.  Atwill is a Universal horror staple and always entertaining to watch.  The only problem with his stint in this movie is that it’s nearly impossible to watch him as Krogh with the stiff, artificial arm – thanks to a previous run-in with The Monster – with a straight face thanks to Mel Brooks and his band of comic geniuses.  There are two other bit parts worthy of note in Son of Frankenstein – Ward Bond  is uncredited as a police officer guarding the gate and Dwight Frye, who was so crucial to Universal’s Dracula (1931) is also uncredited here as one of the villagers.

Aside from the great performances in Son of Frankenstein the movie also features lavish sets, moody lighting and a terrific score (check out the complete cast and crew list for credits) that place it alongside its Whale predecessors.  Perhaps no one should expect the “art” of Whale’s films to be equaled here, but Son of Frankenstein is damned entertaining as well as damned overshadowed, underrated and wrongly ignored.  I strongly suggest you go watch it now and then visit The Universal Pictures Blogathon hosted by Silver Scenes for a full slate of movie commentary on all things Universal.