As much as I love Coppola‘s Godfather films and Lumet‘s Serpico (1973) and Dog Day Afternoon (1975), films that star Al Pacino and that helped distinguish him among the best actors of his generation, it is without fail that the first film that comes to mind when Pacino is mentioned is the 1979 satirical courtroom drama …And Justice For All directed by Norman Jewison.  While not a perfect film by any means ...And Justice For All features one of my favorite Pacino performances, an impressive supporting cast and one of the most iconic, memorable and most parodied endings in film.

Before I get started…and housekeeping for all…

So – is …And Justice For All one of the greatest courtroom dramas of all time?  Probably not, but it is memorable.  And while the title of the blogging event is “argumentative” I think this particular film offers a somewhat unique perspective or spin on that.  I mean the film is undeniably argumentative, but it is in effect “arguing” throughout its narrative instead of during a particular courtroom scene.  In fact, the film’s famous, tumultuous ending, which features Arthur Kirkland (Al Pacino) losing control while defending a guilty client on a rape charge encompasses no argument at all.  It ends with his opening statement, which is a doozie!  More on that in a bit.

To start – what …And Justice For All argues against is the system, justice itself, which as we see and hear is not blind and can be easily bought.  What matters in this world is not justice, but power.  The latter often disguised as the former.  In addition, the film shows in no uncertain terms that even when system participants follow the letter of the law, do their jobs because they care the system still fails.  Unless you have power.  So the film’s title, which is taken from the last line of the “Pledge of Allegiance”…

“I pledge allegiance to the flag of the United States of America, and to the republic for which it stands, one nation under God, indivisible, with liberty and justice for all.”

…is clearly satirical once you view the movie.  “Justice for all” doesn’t exist and while Jewison’s film, which has an Oscar-nominated screenplay by Valerie Curtin and Barry Levinson, does an effective job demonstrating that fact one can argue that it is also its flaw.  This movie throws a lot at you and there’s no mistaking the flaws in the system, which result in comedy of the most grotesque kind.  If you even want to call it comedy, which many do.  And perhaps that’s how this was intended.  I, however, can’t quite get there.  While there are many outrageous moments of the comedic kind I take this film seriously.  It breaks my heart in many instances each and every time I see it.  One scene is particularly heartbreaking – Arthur Kirkland reacts to the fact that one of his clients hanged himself needlessly, due to the negligence of another lawyer who tries to shrug it off.  And Arthur’s cries of “they’re people” hits home every time.  The system has taken precedence over why they are all there.

The entire sordid legal world of …And Justice For All revolves around Pacino’s character.  Arthur Kirkland is a young idealistic defense attorney who’s put twelve years into a profession that consistently tests morals and ethics, if it doesn’t destroy them completely.  We are made privy to Kirkland’s family, which is made up of one man, his grandfather Sam (played by Pacino mentor and collaborator, Lee Strasberg).  Sam raised Arthur and put him through law school.  Arthur’s becoming a lawyer was Sam’s dream and the younger man’s standards are based on the importance the elder places on honesty, what being a lawyer “should” stand for.  These standards stay true in Arthur who still believes in the idea and possibility of justice for all despite all he’s experienced that proves the contrary.  It’s no coincidence that when Arthur begins to fall apart, when he’s no longer sure of why he practices law that it coincides with his grandfather’s deteriorating health and increased memory loss.  The old man can no longer even remember that Arthur is a lawyer and so the younger has no one to hurt but himself if his career is threatened.

By the way a special mention must go to Sam Levene who plays Arnie, Arthur’s grandfather’s best friend at the old-age home where the two reside.  …And Justice For All is Levene’s last film, ending a stage and screen career that lasted six decades.  Levene’s is a recognizable face in many classic films as was the case with so many of our favorite character actors.  He also originated the Nathan Detroit part in the original, 1950 Broadway production of “Guys and Dolls,” which is fairly fantastic.

Anyway – back to the movie – next we meet Arthur Kirkland’s partner and best friend, Jay Porter (Jeffrey Tambor in his first feature film).  We see definitive signs of the wear and tear caused from being a caring defense attorney in Jay Porter whose sanity is frayed upon learning a man he’d defended successfully for murder killed two children.  We get some of the film’s comedy by way of the Porter character, but Jay also serves up some heartbreak as his pain is clearly visible through the mania.

Mr. Kirkland also has dealings with the prominent Judge Francis Rayford played by one of my favorite actors, Jack Warden.  Rayford is a freak, to put it mildly.  Stern and authoritative on the bench this Judge gets his thrills by trying out all sorts of suicide methods from spending time in his chambers with a rifle in his mouth straining to reach the trigger (or whatever you call it), having lunch out on the ledge of his several-story-high office window to flying helicopters to the point where he might run out of gas just to see if he can make it.  Judge Rayford is the most outrageous character in the movie, quite unbelievably so in fact, but he serves to prove how those who judge the system do so disproportionately and unfairly.

Among those whose job it is to judge the system is Arthur Kirkland’s love interest, Gail Packer (Christine Lahti) who’s on the ethics committee.  She and those of her ilk have a major issue with lawyers like Jay Porter who may be temporarily incapacitated due to job-related difficulties, but ignore suicidal judges who regularly carry guns into the courtroom like Rayford.  We must stand on Arthur’s side on this – how does any of it make sense?

And then there’s the all-powerful, highly regarded, honorable Henry T. Fleming (John Forsythe) who goes so far up the letter of the law that people mean absolutely nothing to him.  The ethics committee deems Judge Fleming a pillar among his peers, but the judge is detested by most everyone else.  Arthur Kirkland in particular.

When …And Justice For All opens Arthur Kirkland is in jail for contempt of court after having thrown a punch at Judge Fleming.  Arthur was in Fleming’s court arguing the case of one Jeff McCullaugh (Thomas G. Waites), a young man who was stopped for a busted tail light, was mistaken for another man with the same name and arrested for murder.  McCullaugh has been jailed by this time for a year and a half and Arthur has proof of his innocence, which Fleming refuses to allow because it was presented two days late.  So an innocent man sits in jail because of Fleming’s penchant for the letter of the law.

As the main storyline unfolds – the Arthur Kirkland-Judge Fleming rivalry – we see innocent Jeff McCullaugh succumbing to the systematic abuse inherent in most prisons.  Until Jeff finally snaps.  Eventually the young man is killed after a hostage situation that results from his abuse.  He cannot take it anymore.  All the while proof of his innocence is available.

In the meantime Judge Henry T. Fleming is arrested and accused of the brutal assault and rape of a young woman.  This pillar of the system is accused of a heinous crime.  To everyone’s surprise Fleming requests Arthur Kirkland as his defense attorney.  The Judge’s thinking is that if he is represented by the ethical Kirkland who also happens to detest him then surely most would buy into his innocence.  Kirkland resists defending the Judge at first, but the system shows up to bite him when Fleming’s people blackmail him with an old violation of lawyer-client privilege for which he’d be disbarred.  In addition, Arthur is reminded by both Judge Rayford and Gail Packer that he should just do his job, which is to defend a client to the best of his ability.  It shouldn’t matter who the client is.  And so Arthur Kirkland signs up to defend the Honorable Henry T. Fleming, who it must be said is played exceptionally slimy by John Forsythe.

So the preparations for Fleming’s defense are under way and the Judge makes it clear to Arthur that he’s still in charge treating the attorney like a law clerk while the accused dictates the terms.  Arthur is not thrilled with the arrangement to put it mildly, but he can’t complain about the strength of his case.  It’s airtight.  There are eye witnesses, a successful polygraph and…well, you name it.  In fact, it’s all too clean.  And while Arthur can’t put his finger on what smells he knows Fleming’s guilty.  Or – at the very least – wants him to be guilty so badly that he can taste it.  Then one day Arthur’s suspicions are proven right when one of his other clients, Carl Travers (Dominic Chianese) gives him photographs of Judge Fleming in rather incriminating bondage-style sexual escapades with a prostitute.   Not good, right?  Well, the Judge is not bothered at all when Arthur shows him the photos.  In fact, with a smug smirk smeared on his face the Judge freely admits to the assault and rape he is being tried for.  Fleming adds fuel to the ever-sickening fire when as the trial opens he looks over to the frightened young woman who he’s accused of battering and raping and casually admits to Arthur he wouldn’t mind doing it again.  That’s just before Arthur Kirkland has to deliver his opening remarks in defense of the Honorable Henry T. Fleming. 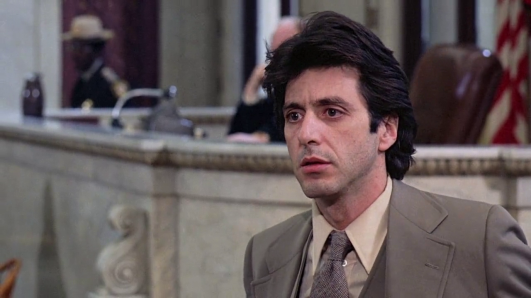 Kirkland stands in front of the jury and starts off his memorable monologue in classic style.  Everything points to an effective defense during which he mocks the state’s case.  Then the tides turn.  It’s subtle.  He goes to motive.  What has kept him up at night – he says – is wondering why the young woman would lie about being raped by a powerful judge.  She has nothing to gain by doing that.  It’s still subtle, but Arthur Kirkland is suffering – the end of his law career is near.  The only sign of his torment at this point are the tears that stream down his face.  Otherwise he remains impassive.

Then Arthur does the unthinkable.  And one of the most memorable courtroom scenes in cinema results.

Al Pacino received a well-deserved Oscar nomination for his portrayal of Arthur Kirkland.  And he just delivered an opening statement.

Winners of acting honors at the 16th Academy Awards in 1944: Paul Lukas, Jennifer Jones, Katina Paxinou, and Charles Coburn
(Original Caption) They "beat the devil" together...Three famous screen personalities exchange comments upon their arrival in London by plane from location in southern Italy for BEAT THE DEVIL (1953), Robert Morley, Humphrey Bogart, and Peter Lorre
Loading Comments...
%d bloggers like this: